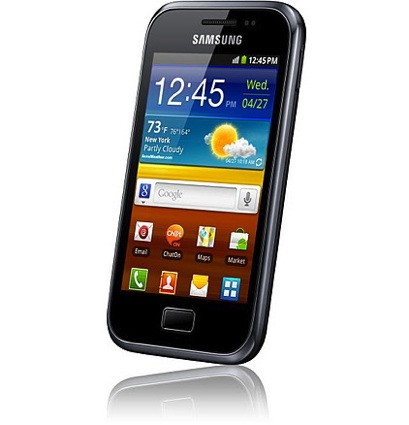 This phone is pretty much considered entry-level by today’s standards so expect this to be cheap wherever you can find it when it launches. “The GALAXY Ace Plus will be available in Russia starting from January 2012, and will be gradually rolled out to Europe, CIS, Latin America, Southeast and Southwest Asia, the Middle East, Africa and China,” says Samsung. Read on for full press details.

Play and Share Faster and Smarter with the GALAXY Ace Plus January 3, 2012

SEOUL, Korea – January 3, 2012 – Samsung Electronics Co., Ltd, a global leader in digital media and digital convergence technologies, today announced the introduction of the Samsung GALAXY Ace Plus. As an enhanced version of the widely popular GALAXY Ace, the GALAXY Ace Plus is the smartphone for trendy and sociable young professionals. The GALAXY Ace Plus will be available in Russia starting from January 2012, and will be gradually rolled out to Europe, CIS, Latin America, Southeast and Southwest Asia, the Middle East, Africa and China.

“Samsung Mobile is opening 2012 with the introduction of the Samsung GALAXY Ace Plus, which will help enhance the GALAXY brand following the huge success of the GALAXY S, GALAXY SII, GALAXY Ace and GALAXY mini. The GALAXY Ace Plus benefits from the Android™ Gingerbread platform and Samsung services, which provide a better mobile experience for more consumers,” said JK Shin, President of IT & Mobile Communications Division at Samsung Electronics. “In 2012, we will continue to make every effort to create an easy and fun mobile experience by expanding our incredibly popular GALAXY smartphone range, which is now one of the most recognized and successful mobile brands in the world.”

Style and power with expanded features

Building on the previous GALAXY Ace style heritage, the GALAXY Ace Plus is a stylishly designed smartphone contained in a modern and minimalist casing with rounded edges, featuring an affordably-sized 3.65” HVGA display. The phone has been designed to be simple yet elegant.

The GALAXY Ace Plus is backed by an impressive 1GHz processor and HSDPA 7.2 Mbps connectivity, providing all the versatility and browsing performance that today’s busy and sociable young professionals need. WiFi 802.11 functionality offers lightning-fast speeds for browsing, downloading and video streaming. Application startups are faster with virtually no lag time, even while multitasking. Additionally, an impressive 2GB of shared storage capacity for multimedia content and up to 1GB of direct storage for applications-more than any smartphone in its category-allow users greater content freedom and usability.

Running on Android Gingerbread and featuring Samsung’s TouchWiz user interface, the GALAXY Ace Plus allows users to handle mobile tasks faster and more efficiently. New music playback functionality features a play progress bar and the ability to view music tracks in folders. Call features allow users to reject calls with text messages or add unwanted callers to a black list log. For added productivity, users also have the option of using ThinkFree, a tool that enables viewing and editing of Office documents, including Word, Excel, PowerPoint and PDFs, while on the move.

Samsung Galaxy Fold 2 could come with an unde