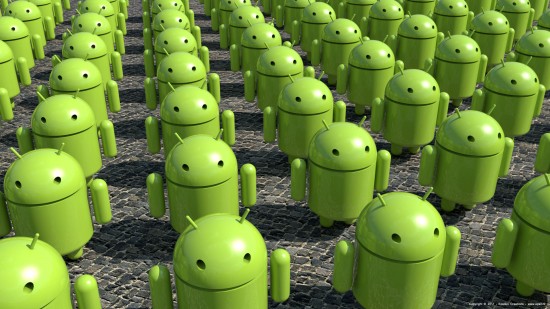 It’s been a long time coming but according to the data from “mobile app market intelligence firm” Research2Guidance, the Android Market seems to have hit the half a million app mark with a little over 500,000 applications published for the month of September. Another tidbit I found interesting is that over 37% of app submissions have also been removed at some point for various reasons.

In comparison, the Apple App Store stands 600,000 apps strong and has about a 24% removal rate. What’s more is according to the data, Android developers seem to be a tad more “productive” than their Apple’s counterparts, publishing around more than 6 apps to the Android Market since its launch. Compare that to around 4 published apps per developer in Apple’s App Store.

While this is quite a landmark for Android, there’s always the argument of quality vs. quantity. Let’s hope now that the Android Market has the quantity, Google may begin policing their Market a little better and get rid of things like duplicate apps and blatant theft. You can check out Research2Guidance’s full press release below.

37% of published apps have been removed from the Android Market.

The actual total number of applications published on the Android Market leapt to over 500,000 in September 2011. In the meantime, the Apple App Store stands at just over 600,000 successful submissions: just 20% more. But over 37% of the applications published were later removed from the Android Market for various reasons, whereas the Apple App Store has removed just 24% of published apps in comparison, as of the end of September.

Although Apple regularly cleans up its store from inappropriate or outdated content, its active application share still exceeds that of Android. It is likely that the more rigid application submission requirements prevent developers from publishing multiple trial or low quality applications whereas publishers in the Android Market place a lot of market testing, trials, demo and malware content. Over 78% of the apps removed from the Android Market were free, which could mean that publishers put more effort into the applications they place with the pay-per-download business model, thus ensuring that it is kept longer in store.

The share of deactivated apps in the WP7 Marketplace today stands at just 13%. However WP7 Marketplace is a comparably young store and many publishers are still exploring its potential. Fifteen months after its launch (comparable to the WP7 store now), the Android Market similarly had 86% of its apps active and a significant application store clean-up didn’t get started until the end of 2010.

Android developers are significantly more productive than Apple’s. The average publisher on Android has placed more than 6 applications in the Market since launch, compared to just over 4 apps on average that have been published by iOS developers.

Over the past few months, the Android Market has been maintaining an exponential growth, but is still lagging behind the app store market leader, Apple. In Q3 of 2011, the number of active mobile applications in the Android Market stood at 319,161 compared to 459,589 in Apple App store.