Alongside some redesigned (and very good-looking) apps, the entirety of Android OS has gotten a very pretty update with Android 4.0. Matias Duarte said we wouldn’t recognize Android as we know it and, well, he was right. Let’s jump right into all the new UI changes and features we’re getting, shall we?

To go along with the change in color scheme made in Honeycomb, Ice Cream Sandwich for phones also adopts the heavy blue accents in various parts of the operating system. Some status icons – such as WiFi and signal strength – are blue, as are menu selections, check boxes and more. I personally like it, but I know some will miss their green.

Google made a big deal about the new font they’re using for Android 4.0. It’s called Roboto and is supposed to look good no matter type of display you have, but is said to really look good for the 720p display on the Samsung Galaxy Nexus. They used Roboto throughout their press conference and I can say, at least for me, that it was pleasing to the eye.

Google’s focusing on simple gesture-based navigation in Ice Cream Sandwich. In most apps and parts of the UI, swiping up, down, left or right will do a lot of things. In Gmail, for instance, you can switch between different emails with ease, while in Gallery you can move on to the next page of images. We will discuss some scenarios where this is used below.

Google’s borrowed some elements from the Honeycomb lock screen but have made it even better. You can either unlock the phone go directly to the homescreen or unlock it and go directly to the camera app. The camera is the number one thing people need very fast access to as things can happen in a blink of an eye and they’ve made that happen here. 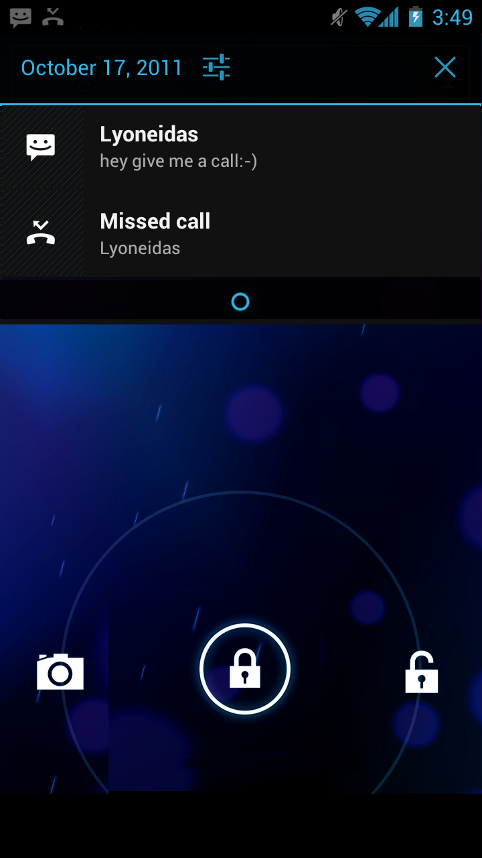 And while this isn’t quite “lockscreen,” the call reject and answer functions deserve mention here. Like many phones now (including Samsung’s TouchWiz 4 devices), you now answer calls by sliding to the left or the right – reject and answer, respectively. You can also reject and immediately send a pre-written text to let your caller know why you had to reject the call. The list of pre-written texts can be customized to your most common situations.

Stylistically we get a similar launcher to Honeycomb’s. When placing apps and widgets, you can use the light “plus” symbols in the background to help you figure out how much space you have and where you can drop the application or widget. Also coming from Honeycomb are resizable and scrollable widgets. Controls are present on all four corners of a compatible widget, while scrollable widgets are presented in the same card-like system from Honeycomb as well as the traditional scroll (like the Calendar and Gmail widgets from Honeycomb).

Folders have gotten a great overhaul. To create folders, simply start by dragging one app icon over another and the folder will automatically be created. Opening the folder will give you the ability to either launch an application, reorganize application icons or rename the folder. And more than just apps, you can also put people into folders so you’ll have one-click access to all your favorite contacts. 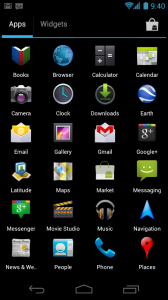 A dock at the bottom gives you icons for opening the apps and widgets tray, the phone application and the browser. You also have two additional spaces to put whatever you’d like there. You can simply drag and drop any application icon or folder (including “people” folders) for access on any of your homescreens.

Jumping into the apps tray is nothing out of the ordinary. We’re greeted to a tabbed layout for switching between applications or widgets. Scrolling through each set of homescreen items is the same – simply flick left and right, just like Honeycomb.

At the bottom of every screen – at least on the button-less Galaxy Nexus – are software buttons for Home, Back and switching between apps. These controls can be dimmed or can be completely shut off depending on what you’re doing. We imagine there’s a “flick” gesture to bring it all back up.

The notification bar has gotten a pretty significant facelift. You get more information such as the amount of items within a notification, as well as a photo to the left relevant to that notification. Some apps will simply display its icon, while others may show your contacts’ faces (such as for missed calls and text messages).

Also new to the notification bar is the ability to dismiss individual notifications. If you want to get rid of a notification but don’t want all of them to go, simply swipe it off of the screen either to the left or to the right. Intuitive, simple and EXTREMELY useful.

Other features include the ability to pull the notification bar down while your lockscreen is up as well as native lockscreen controls for the default music application. We imagine the former is an optional feature for those worried about security.

Although Google made no mention of this in their press conference or in their platform highlights for Android 4.0, they noted in the SDK notes that if developers target SDK revision 14 in their applications, hardware acceleration is on by default. This means smoother application use as the GPU will handle a lot of the eye candy.

The settings menu has been redesigned with new controls and new UI elements. Not too much of a stray from the norm but it all looks very nice and clean.

As I alluded to before, you switch between different apps by pressing the right-most button on the on-screen controls. You get a list of apps you’ve recently used and a snapshot of your latest activity within those apps. You scroll up and down to traverse the list and tap it to jump back into that application. It’s the same feature introduced in Honeycomb, but new to it is the ability to get rid of any of the apps you want. Just like with notifications, simply swipe the card off of the screen and away it goes. 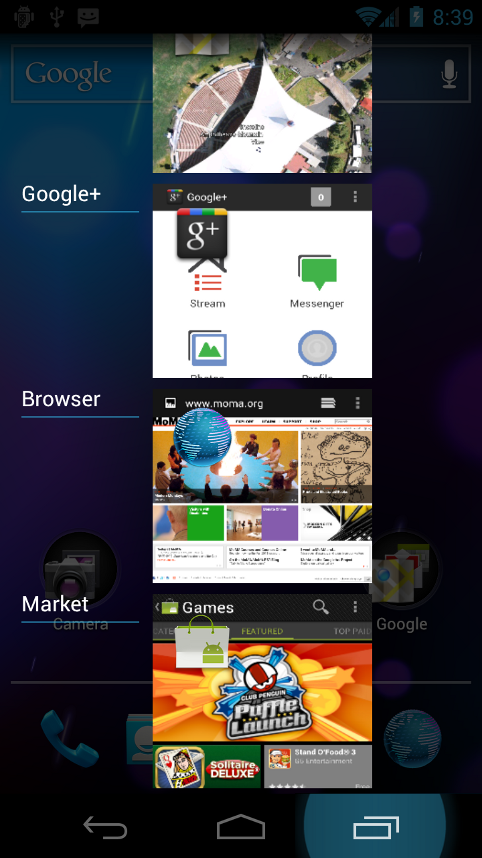 The Android 4.0 keyboard is more reminiscent of Gingerbread than it is Honeycomb, but it’s gotten some nice upgrades. Alongside improved text prediction, keyboard responsiveness and accuracy, Google’s added better text editing controls.

The tabs for moving word selections are back, but you can now replace selected words with the tap of a button. You can also drag and drop that word anywhere within your sentence if for some reason you ever need to jumble words around.

Perhaps the biggest change is to voice recognition and input. You still have a microphone icon to activate voice input, but you no longer have to get your sentences out in one breath in order to avoid pressing the button multiple times. If you stop on a certain word or section, it adds the words you said in real time and continues listening for new words until you specify you’re done with inputting text. 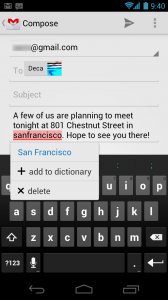 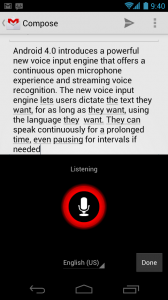 And these are just the things they talked about on-stage. It seems like there will be a lot more that hasn’t been revealed so already you can tell Android is a completely different operating system with this upgrade. Click here for our rundown on the core applications Google’s updated and included in Android 4.0 Ice Cream Sandwich. 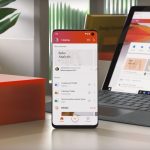