Behold, the Power of the Android Community: HTC to Unlock Future Bootloaders

Honestly, guys… I can’t even believe what I’m seeing here. Never in all of my days have I seen a company listen to such a vocal minority with such speed and urgency.. Today, friends — HTC has agreed to unlock their bootloaders.

There has been overwhelmingly customer feedback that people want access to open bootloaders on HTC phones. I want you to know that we’ve listened. Today, I’m confirming we will no longer be locking the bootloaders on our devices. Thanks for your passion, support and patience. 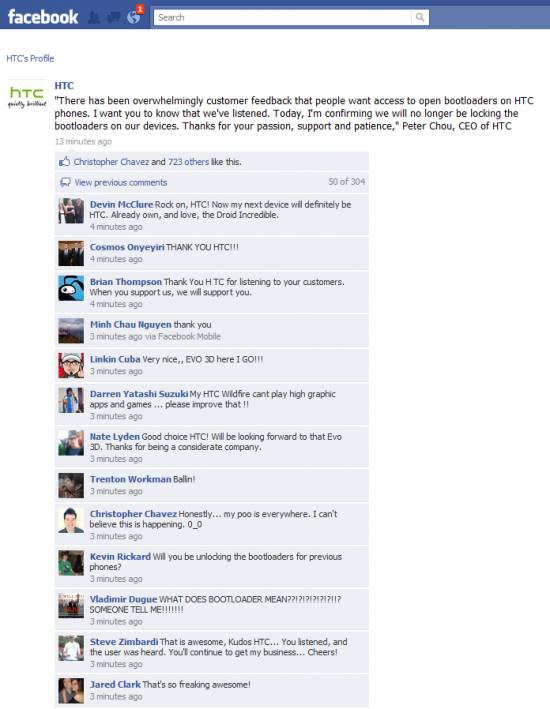 Wait- what’s that sound? Its the collective cheers of the Android faithful around the globe chanting, “HTC! HTC! HTC!” Wow. I’m at a loss for words here, guys. I’m actually getting a little teary eyed, not even going to lie to you.

In case you’ve missed the news that’s been going around the past few weeks, there was a growing number of users from the Android community speaking out on HTC’s newest policy of heavily locking down their bootloaders and encrypting them. This would prevent people, like myself, from not only rooting their phones, but installing custom ROMs on future HTC devices across the board. Basically giving us little to no freedom to modify our phones as we please. Android enthusiasts from around the interwebs took to HTC’s Facebook page, bombarding them with comments and messages asking them to cease this new policy and return to their old way of doing things, even warning to never buy another HTC device again.

Not only was HTC listening, but HTC was also deciding. Their decision came today, not even a day later and it was via Facebook that they announced their new policy of unlocking bootloaders on future handsets. And in process HTC let us know that they, unlike rival companies (Motorola, Apple), actually listen to their customers. Bravo, HTC. Bra-freakin’-vo.

Only question that remains is if this new policy will go into effect on the upcoming Sensation and Evo 3D handsets do out in only a few more weeks. As always, we’ll be keeping you updated.

***UPDATE: Got a Phantip from a reader who emailed HTC regarding the unlocking of the Evo 3D and he received this email in response:

Could this mean a potential Evo 3D delay? Or will HTC be issuing an update? The plot thickens…