Th Casio g’zOne Commando is the first Android entry into Casio and Verizon’s lineup of rugged, world-proof handsets. The g’zOne (that’s pronounced geeze-One) lineup is known for being built tough and resistant to water, dust, shock, and general abuse. For this reason, the handset is marketed towards those with active lifestyles or those working in fields that can give a normal phone a good beating, such as construction or logging. The phone lives up to expectations in this area and delivers some unique features that we really liked, but an unresponsive touchscreen and below-par camera detract from our overall positive feelings about the phone.

The Commando is built tough, cased in sturdy rubberized trim and watertight. Red accents are a nice, Droid-like touch, and some exposed screws give the handset an industrial look. This one is built about as tough as they come. Some may be a bit turned off by the phone’s bulk — it feels heavy and has a much larger footprint than is necessary for its 3.6-inch screen — but other will love the look and feel of what Casio has put together. 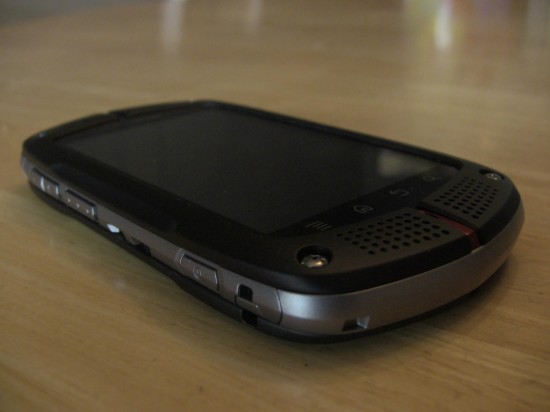 The right side of the phone offers a dedicated camera key and USB and 3.5mm headphone ports. These ports have watertight covers that must be popped out of the way in order to use. This side of the handset also features a notification light. The left side of the device gives us a volume rocker, dock connecter, power/standby key, and a tactile button that can be assigned for one-click access to nearly any service or feature on the Commando.

Below the screen you find the standard four Android softkeys and a set of speakers. We really liked the placement of the speakers on the Commando. It seems most handsets decide to put the speaker on the back of the device, which seems counter-intuitive when considering we might place the phone on a table to watch a video, muffling the back speaker. Not only is the speaker on the Commando placed well, but it sounds pretty good to boot. It’s loud, it’s clear, and it even has a bit of bass boom for your tunes. 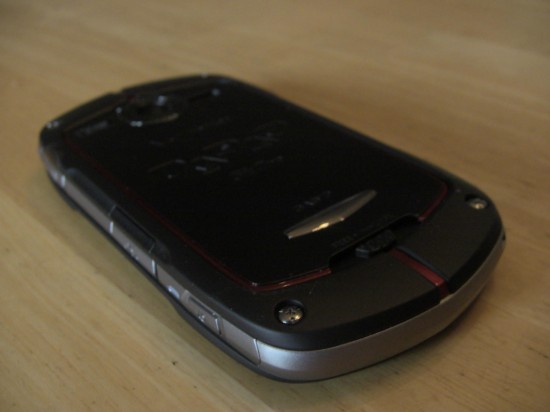 The screen directly above the speakers measures 3.6-inches and features a resolution of 480×800 pixels. It looks good enough, but unfortunately its responsiveness is a bit of an issue. If you are slow and deliberate with your swipes and strokes you should have no problem, but don’t even think about quickly flicking through home screens or scrolling webpages. The screen simply doesn’t respond quickly to input.

Thankfully, the 800MHz processor within the Commando remains pretty zippy, helping to balance out some of the screen response issues with quick switching between menus and homescreens. Applications launch with ease, but this is by no means a 1GHz+ Snapdragon. It still feels like a mid-range phone in terms of pure processing power and speed.

The Commando is an Android 2.2 device with a custom interface by Casio, though it feels for the most part like a stock experience. The UI layer isn’t as deeply integrated as HTC’s Sense or Motorola’s Blur, and most services look and behave as they would on a Google Experience device. This is not a Google Experience device, however, and Verizon has bundled it with Bing services and plenty of other bloatware including VZ Navigator and VCast apps.

The major refinement Casio has made to the software interface is the inclusion of the Snap-Out Menu. This is a customizable shortcuts menu that cane be “snapped-out” from the lower left-hand corner of the homescreen. Dragging your finger out reveals five shortcuts to choose from, and a sound cue can be helpful for locating services without looking at the phone’s screen. We like the idea of this menu and actually got quite a bit of use out of it. 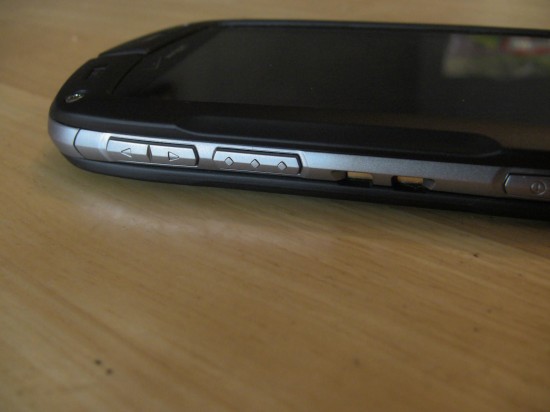 Another way the Commando deploys shortcuts is through the tactile key on the left side of the phone. This key can be assigned to nearly any function or app within the phone’s software and quickly called up with one press. You could set the button to dial a specific number or launch your email app, for instance. We got the most use out of using this key to launch or messaging app for quick texting.

Speaking of quick texting, the Commando comes with XT9, a keyboard that takes its cues from Swype and allows you to type by dragging your finger through letters to form words rather than traditional letter-by-letter entry. I have always been a huge Swype fan and had no complaints about the implementation of a similar keyboard on the Commando.

Given that this device is geared towards those with active lifestyle, the pre-installed g’zGear suite of applications is perhaps the best software element of the phone. It brings a set of applications and widgets that allow you to track everything from the temperature to the tides. The Commando is outfitted to help anyone find their way on an outdoor adventure, whether you are running or hiking. Accompanying widgets allow you to grab information from any of the g’zGear apps at a quick glance.

The camera is perhaps the weakest part of the Commando experience. Taking pictures with the 5MP auto-focus snapper with LED flash is easy enough, but the end result is far from spectacular. I could try to explain, but as they say, a picture is worth a thousand words so here are a few sample shots. 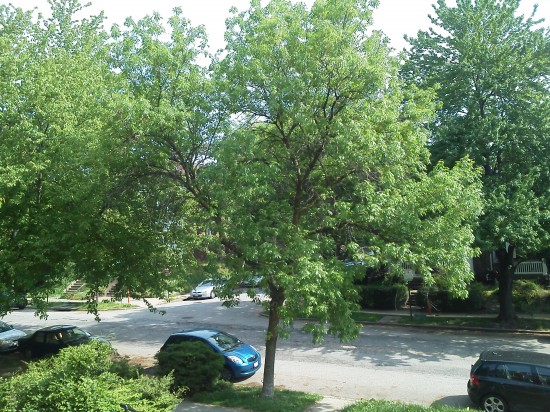 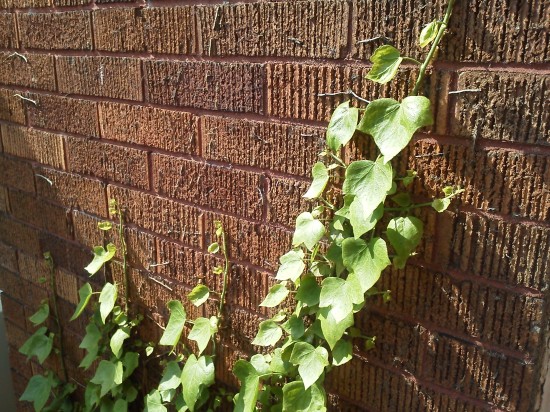 Video isn’t much better. It’s actually a bit worse. Video captures is by no means smooth and the end result looks like something you would have expected from a feature phone a few years back.

Being one to not use my phone for much video or picture taking, I can let the lack of a stellar camera slide. It doesn’t hurt my overall feelings on the phone too much, but for some it could be an area of big concern.

Being the first smartphone member of a Casio lineup of feature phones for Verizon, I fully expected to be let down by the g’zOne Commando. I was pleasantly surprised to find this wasn’t the case. It isn’t the handset for everyone, but for those hesitant to buy a smartphone due to an active lifestyle or just plain clumsiness, the Commando is worth a good hard look. It is built tougher than you will probably ever need it to be.

It delivers at the software level as well, providing a familiar Android experience with a few twists that really add some value. The Snap-Out Menu and Tactile Key get a big thumbs up, and g’zGear applications are sure to get some use by owners of the Commando.

The phone is definitely not without its flaws. The touchscreen can lag and be unresponsive, and a lower-powered processor doesn’t do much to elevate the phone from its humble, feature-phone roots. Throw in a shoddy-at-best camera and you get the essence of the Commando: a no-nonsense device for no-nonsense people. Tech heads and those on the cutting-edge might want to stay away, but for the everyman the Commando gets the job done just fine.