Motorola XOOM Gets Torn Down 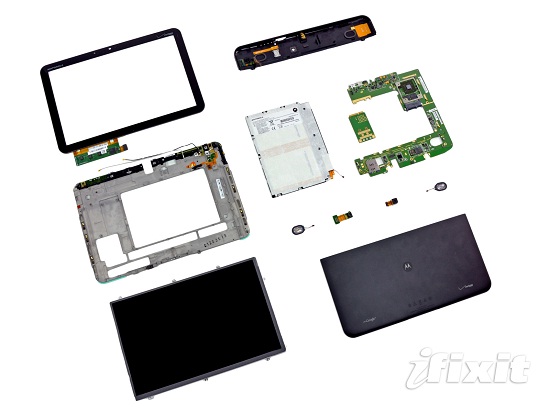 Jeez, it seems like just yesterday I was wishing the Motorola XOOM would get its own teardown. Oh wait, that was yesterday. Anyway, the folks at iFixIt got their hands on the newly-launched Motorola XOOM and wanted to see just how Motorola was going to perform the 4G upgrade.

They say that the innards were designed from the start with the upgrade in mind as the process to access the radio board is so easy that a donkey could perform it in less than two hours. (Their words, not mine.)

1. (http://bit.ly/el3lvv) Use a T5 Torx screwdriver to unscrew two screws on the bottom, and then slide the back panel to expose a mysterious circuit board that immediately becomes accessible. In fact, there are retaining clips on the back of the rear panel that prevent it from sliding any further (which of course we immediately circumvented).
2. (http://bit.ly/f5jMlM) Disconnect two antenna connectors, unscrew the two Torx screws holding the board in place, and swap it out with a 4G LTE board.
3. And… That’s it. Here is a picture of the dummy board we found in our Xoom, which we believe currently acts as a routing path for the antennas:http://bit.ly/fiVEo8

A seasoned technician can perform this swap in less than 10 minutes. Heck, a donkey could probably pull it off in less than two hours. We have no idea why a customer couldn’t just go to a Verizon store and have on-site representatives enable 4G on the spot, just like they’re able to transfer mobile contacts and perform other activation procedures.

Go on over to iFixIt’s site for the full breakdown of images and the step-by-step procedure. I’ve left some of their notes about the teardown below.

* A dummy SIM card is included in the Xoom, with the inscription “Replace with SIM only after 4G upgrade.” Verizon’s 4G LTE network requires a SIM card, so not every Verizon device will have 4G. Right now the list of compatible devices is very short: the Motorola Xoom and the still-unreleased HTC Thunderbolt.

* According to Motorola, the Xoom weighs 730 grams, exactly the same as the iPad 3G — although the Xoom is noticeably thicker.

* The Xoom features a 5 MP rear camera and a 2 MP front camera. At least for now, Motorola’s got Apple covered in the tablet camera arena. And unlike Motorola’s other recent device, the Atrix, both cameras are connected to the motherboard by separate cables. You won’t have to replace a ton of other stuff if just your camera fails.

* The 3250 mAh, 24.1 watt-hour lithium ion polymer battery boasts a healthy 10 hours of Wi-Fi browsing and video playback, and a massive 3.3 days of MP3 playback. It’s also just as beastly as an iPad’s battery, taking up a very good chunk of internal real estate.