How to Root the Motorola XOOM 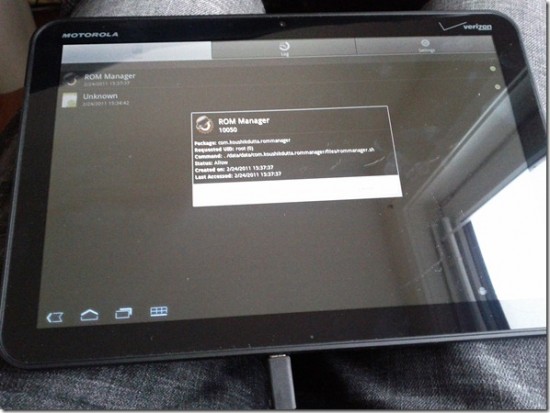 With an unlocked bootloader – something that’s been rare for Motorola to do these days – you had to guess that their XOOM tablet would be easily rootable, right? We already let you guys know that the XOOM had gotten Clockwork Recovery, but it’s not available for download yet. He’s confident that the root method he’s put together is solid enough to put out, though.

Koushik – the grand benefactor in all of this – has the downloads and methods you need ready to go. We’ll paste them in a blockquote below, for your convenience. [Thanks to all who sent this in!]

Since it’s another Google experience device, and ships with fastboot support (albeit, limited), it really does come rooted out of the box. Just needed to figure out the board kernel base, and compile up a new kernel.

Unfortunately the kernel was not available in the Android repositories. At first, I tried using the Harmony kernel, since they are both tegra 2 250 chips. That turned out to be major fail. As soon as I was about to give up, I noticed that AOSP had updated their tegra kernel repository with some new tasty branches for stingray. Kudos to these guys for being so on the ball! I was able to compile that up and get a working recovery to obtain root, and then get Superuser on the device.

I also built up a recovery, but due to a nonfunctional SD card slot (until they release a firmware update that enables the slot), nothing really works. That will come later.

Here are the instructions to root your device (this assumes you have adb and fastboot installed on your computer):

Yep, that should do it.

As I mentioned, I have a working recovery, but will not be releasing it until Google or I get the SD card working.

ROM Manager support will come as soon as that happens. But feel free to buy a Premium copy in advance.