We just got back from demoing an onslaught of Android-based handsets from Motorola and there was one in particular I really wanted to get my hands on. The Motorola FlipOut might not be the most exciting device for people like you and myself who appreciate a good combination of braun and beauty, but Motorola’s not here to please just one crowd.

The FlipOut isn’t the performance beast you’d want to handle all of the heavy lifting of intense mobile computing, but the device also isn’t for the person that needs to do a lot of heavy lifting to begin with. And there are a lot of people that fit right into that category. For the sake of comparison, the Symbian operating system powers many low-powered, cost-efficient handsets around the world. Their platform isn’t number one because of how many smartphones Symbian is on, it’s because of how many feature phones it’s on. Most people who own a phone with Symbian aren’t even aware that it’s Symbian. This is the type of market penetration Motorola’s getting at with the FlipOut.

Affordability attracts a ludicrously large amount of people, and when Motorola shows those people what they can do with a phone that won’t break their bank, they’re hoping people are going to want to flock to that product. This is what the FlipOut is all about, and this is what Motorola’s overall strategy with Android is all about.

I digress, though, because these are supposed to be my impressions of the device. I sat down with the FlipOut for a decent amount of time today and while I wasn’t completely blown away, I was able to play out the age-old scenario of a teen or a light smartphone user who would pick this up to do their cliche bidding of texting, emailing, and web browsing.

The first thing I’m drawn to is the keyboard, of course. The phone flips out to reveal a full 5-row QWERTY keyboard for those who aren’t really keen on typing on a screen that small. (And the screen is small, indeed, clocking in at 2.8-inches with a QVGA resolution.) The keys had great track and feel, but were just a little too scrunched together for my taste (though this could be because I have hands the size of coconuts.) I had no problems with “clickability,” if you will, but it still wasn’t as fast as when I took it to the virtual keyboard (which I didn’t have many problems with considering how little room I had to work with.)

Backing Android 2.1 with MOTOBLUR (yes, Motorola’s still using MOTOBLUR despite their plans to eventually move away from it) is a very respectable TI OMAP processor (still not sure which one) clocked at 720 MHz and working in conjunction with a PowerVR SGX 530 GPU. This won’t “cut through the web like a circular saw through a banana,” but it’ll make for some pretty speedy activity when switching between apps, browsing the web, and typing to your heart’s content. 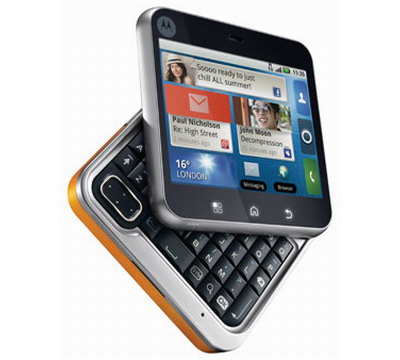 One thing I was pretty disappointed with was the phone’s camera. I didn’t expect it to keep up with the likes of the Motorola Droid 2 or the Droid Pro, but I didn’t think the muddy quality it eventually ended up producing would bother me as much as it did. (Mind you, it’s only a 3-megapixel sensor but I’ve gotten better quality out of other devices with similar specs.) I wish I could say for sure what the problem is, though, because I couldn’t tell whether or not this was because of the low-resolution screen or the quality of the camera’s sensor. The only way for me to be sure would’ve been to export the images and take a look on my computer, but I didn’t have much time to do that. Even with giving the FlipOut the benefit of the doubt in this area, I didn’t walk away too satisfied.

Other than that, though, everything was business as usual. When you take away Android, MOTOBLUR, and all of the features you expect to make up any minimal Android handset these days, the FlipOut is a unique and fun communication tool that’ll catch on by virtue of its form-factor and “flipout” mechanism alone. And if that means getting more Android devices into more hands, then I’m all for the large pool of different and unique devices we’ve been so fortunate to enjoy these days.