Sprint’s announcing the continued expansion of their growing 4G network (something that’s starting to become a nice trend for Mondays). While today’s expansion might not be as beefy as weeks past, we can’t say we’re disappointed about it. Those in Modesto and Stockton, California will finally be able to enjoy 4G coverage today after many of you were accidentally able to tap into the network not too long. 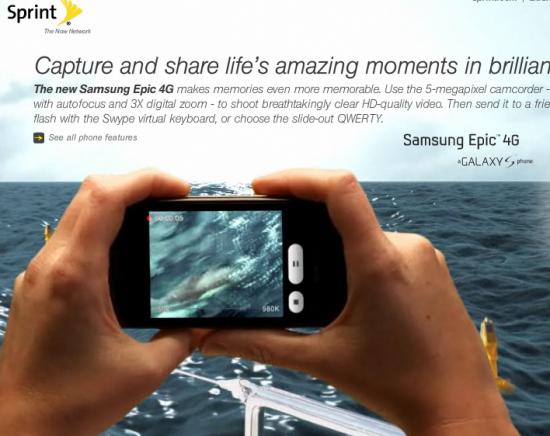 Additionally, Sprint customers in Jacksonville, Florida, Wilmington, Delaware, and Grand Rapids, Michigan are all being lit up. With the HTC EVO 4G out now and the Samsung Epic 4G headed our way sometime soon, we can only imagine these 4G expansions will continue to spill out like water from a bottle as Sprint’s newfound business model mostly depends on them getting as many people as they can using 4G services.

Sprint’s also launched their promotional site for the Samsung Epic 4G earlier. There’s not much to see here except some eye-candy, specs, and a sign-up form to be notified when the phone becomes available, but that should be enough to get you too click on through, no?

With 4G, Sprint customers experience fast mobile downloads, streaming video without the lag, and turbo-charged Web browsing. This new wireless technology boasts download speeds up to 10 times faster than 3G.1 Users can video chat with friends and family via the popular HTC EVO(TM) 4G, America’s first 3G/4G wireless smartphone. And in the near future, Sprint customers will be able to purchase Samsung Epic(TM) 4G, the company’s second 4G enabled smartphone.

With the Overdrive(TM) 3G/4G Mobile Hotspot by Sierra Wireless, users can create a 4G hotspot on the road or at home. With the Sprint Free Guarantee, customers can try 4G for 30 days and if they are not satisfied, they can cancel service and have the opportunity to be fully reimbursed.2 Sprint also offers simplicity and savings vs. competitors with Everything Data plans, which include unlimited Web, texting and calling while on the Sprint network for one low price.

“Sprint customers are the first in the country to use 4G with either a smartphone like HTC EVO or one of Sprint’s other 4G devices like the 3G/4G Overdrive Hotspot to wirelessly connect a laptop to the Internet,” said Matt Carter, president of 4G, Sprint. “Later this year, Sprint will launch Boston, Miami, New York and Los Angeles, enabling millions more to harness this powerful new service.”

Sprint is delivering the power of 4G as the majority shareholder of Clearwire, the independent company that is building the WiMAX network.

Sprint Nextel offers a comprehensive range of wireless and wireline communications services bringing the freedom of mobility to consumers, businesses and government users. Sprint Nextel served more than 48 million customers at the end of the second quarter of 2010 and is widely recognized for developing, engineering and deploying innovative technologies, and is the first and only wireless 4G service from a national carrier in the United States; offering industry-leading mobile data services, leading prepaid brands including Virgin Mobile USA, Boost Mobile, Common Cents Mobile and Assurance Wireless and instant national and international push-to-talk capabilities; and a global Tier 1 Internet backbone. With its customer-focused strategy, you can learn more and visit Sprint at www.sprint.com or www.facebook.com/sprint and www.twitter.com/sprint.