Rumor: Motorola May Be Bringing Us A Square ‘Droid With MOTOBLUR

Many of us have been wondering what Motorola’s next move would be. After the Motorola Cliq, their flagship Droid, the underwhelming Devour, and the quirky Backflip on AT&T, we’re patiently awaiting a new phone announcement. The wait might be over soon, though, with the latest funky looking picture to come splashing out of the rumor mill. 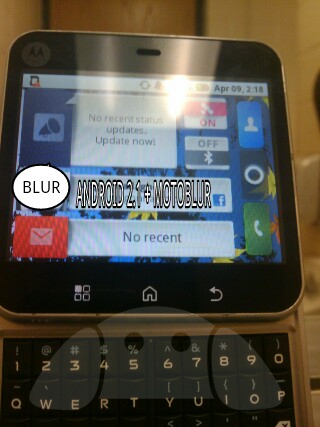 John Walton – of PhoneDog fame – received a tip about someone’s friend’s dad’s son’s friend who supposedly got their hands on a blocky-looking handset sporting MOTOBLUR. The story behind how this photo came to light is very reminiscent of a big fake lie, but check out the image to the left and the quote below to draw your own conclusion:

“My source says his buddy’s dad works for Motorola and let his son take the phone to school, who, in turn, lent the phone to my source to be used as a calculator on a math test.”

Yea, I’m just as skeptical as you are right now reading this.  At first glance, this looks like a sure-fire legitimate device, but check out the area where the arrow for the app drawer normally is: I don’t know about any of you, but that looks nothing like the MOTOBLUR I know. Also, if you want to be picky, the on-screen widgets don’t look very convincing (especially considering the very ugly font being used to display whatever information should be showing up there).

I could be wrong, however, and this device could actually exist somewhere in the wild. The actual hardware does present some Motorola-esque overtones, and it would take a good amount of work to craft something in Photoshop that looks this believable. On another note, it’s entirely possible that this  could be an old prototype of Moto’s first MOTOBLUR offering (which could probably explain the unfinished-looking UI).

Let me stop grasping at straws, though. If you want to check out the original post, you can’t: John was asked to remove the post by the original tipster. What about you guys? Do you think this mystery device is real? If so, what do you think it could be? Voice your opinion in the poll below, and be sure to leave a comment with your thoughts for good measure!