HTC Hero and HTC Lancaster Could Both Come June 24th

The overwhelming majority of Android enthusiasts assume that the global announcement by HTC on June 24th will be to announce the often rumored HTC Hero – we would be excited for that alone. But the Economic Daily News is reporting that HTC will announce TWO phones at that event: the HTC Hero and the HTC Lancaster:

The HTC Hero will be available in two versions, with and without a QWERTY keyboard. The model with a keyboard will be named HTC Memphis, or HTC Lancaster for sale by AT&T exclusively in the US for six months starting the third quarter, the paper indicated.

So there you have it – the HTC Hero could be one phone with two different versions – a touchscreen only and a touchscreen with slideout QWERTY keyboard. We’ve seen leaked pictures of each, so shall we put them side by side and see how that rumor might add up? 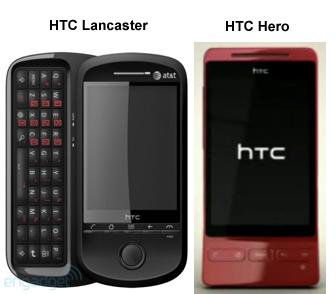 Eh… they appear to be different enough to be completely different phones. The shape is different, the button schema is different the D-Pad is different… they look somewhat similar in that they are classic HTC but still – very different. I’m sure the AT&T customers out there are thinking, “Who cares – we’re getting Android!”

Also interesting to note is that the HTC Hero won’t come with the typical Android UI but will instead be equipped with HTC’s handcrafted TouchFLO 3D UI:

While running on the Android-based platform, the HTC Hero will also be equipped with HTC’s in-house developed TouchFLO 3D user interface, EDN noted.

You’ve seen pictures of HTC Rosie UI and videos of the HTC Hero ROM and it wouldn’t be any surprise if June 24th brings this brand new smoking hot UI to fruition. I mean cmon, you’ve seen the big old rose laying on the guy’s chest on the event promo flyer!

Nonetheless we hope the basic jist of the rumor – that HTC will announce both the Hero AND Lancaster – will hold up. While we will be perfectly happy (to put it lightly) with the announcement of ONE new phone, there will be no complaining if HTC unveils two (or more) Android devices along with treats like TouchFLO 3D on Android.

What do YOU think we’ll see on June 24th?