We’ve speculated about the wide range of devices that could be based on Android and how they could revolutionize everything from in-vehicle communication and entertainment to household info centers. The speculation is over – it is no longer a matter of “if” but “when”. The New York Times is reporting that confidential T-Mobile documents discuss a “home phone” based on Android for release in early 2010!

I call the unannounced and unnamed device the “Android Hub” because of Verizon’s recent launch of their “Verizon Hub” product which sounds similar on the surface. However, when you consider the possibilities Android introduces it is an entirely different ball game. According to the article the home phone has a 7-inch touchscreen with no physical keyboard and, “would handle basic computing jobs like checking the weather or managing data across a variety of devices in the home.” 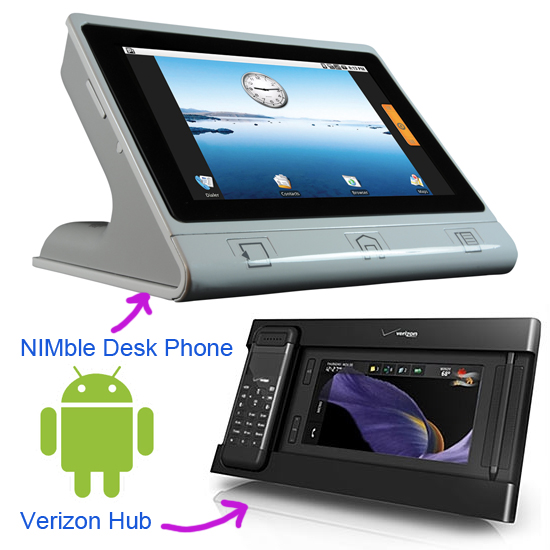 In my January article covering the NIMble Desk Phone I suggest some possibilities that an Android Based Desk Phone could offer once 3rd party manufacturers jump on board:

If these types of devices become staples in the household, appliance makers and other companies would have a huge incentive to create ways to control them through the device. For example, you could press a button on your NIMble desk phone in the theoretical future to:

And now it seems this is exactly what T-Mobile is working towards, although you’ve got to crawl before you can walk. The NYTimes article suggests T-Mobile’s motives:

T-Mobile shares in this grand vision of more sophisticated devices in the home. For instance, its line of Cameo digital picture frames can receive new photos sent via e-mail or from cellphones. T-Mobile would like to link phones, photo frames, digital cameras, security systems, webcams and TVs through its software and networking services.

T-Mobile is apparently working on “a variety of communications devices” and these include the home phone and a tablet computer… what other treats could we have in store? Unfortunately it’ll likely be at least a year until we see this “Android Hub” make its way to market, but thankfully that will be plenty of time for Android to mature a bit as a platform with more solid applications and a more polished OS overall.

I wonder if Google will have an Android Developer Challenge centered around different devices like perhaps an ADC Home Edition where applications are developed with the purpose of in-home use in mind? I hope to see an ADC 2 before then but I’m getting sidetracked here. Android may only have 1 mass appeal consumer device launched but worldwide attention is really starting to ramp up. Americans might not know T-Mobile as one of the more powerful carriers domestically, but globally that is EXACTLY what they are. And with Android devices from big brand names all on the way, it is only a matter of time before the Android volcano erupts, launching Android love across the entire land.

Next up: Ford and GM confirm my April Fools Day joke as reality and announce an Android Car. Please… pretty pretty please? 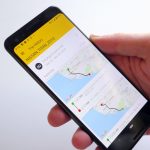