Part of Android’s beauty is that it allows ANY manufacturer or carrier to slap the Open Source OS on their device for free, instantly embedding feature packed software on their phone. We’re a little surprised that some small manufacturers haven’t taken advantage of this, trying to make a name for themselves by piggy backing Android. But at CTIA 2009, Amico attempted to do just that with their Android powered Brava phone. 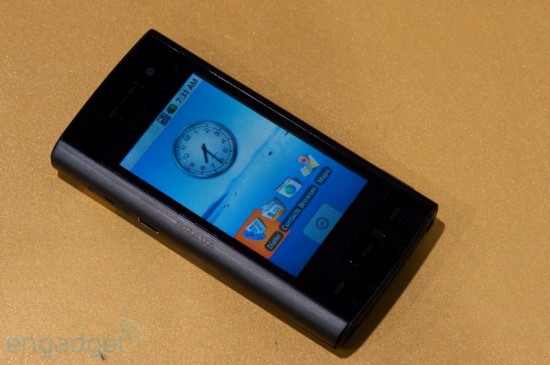 It’s a little bulky and blocky in appearance, but props to Amico for putting this puppy out there to begin with. Well, it isn’t QUITE out there. In a Koganesque move, Amico is sending the Brava back to the labs to equip it with 3G which the device currently lacks. The 3G speeds will join a 3MP camera, 3-incch resistive WQVGA display, 624MHz  Marvell core processor and microSD expansion slot on the specs sheet.

So who are these “Amico” folks anyways? Are they just another seemingly scammy Hop-On like company or a legit up and coming contender? The original article found on Engadget offered little in terms of information on the company and the limited Googling of AndroidGuys yielded nothing, but AndroidAuthority did some digging and found a little more info:

On their website, the company really pushes the affordability of the devices they manufacture:

Given Android is a free OS to integrate, we would hope Amico is shooting for that sub $100 price range which, despite any apparent bulki/blockiness would make for an attractive offering. We’re rooting for our amigos at Amico – bring it on! Also note that Engadget has a video of the device and a photo gallery.