Hop-on, a company typically known for their low end handset offerings, has announced that they will showcase its new Android enabled device at the Las Vegas Consumer Electronic Show in January 2009. The phone will cost $200 or less.

Will it be compareable to the T-Mobile G1 in quality and form factor? Hard to say… but what is more interesting to speculate on is Hop-on’s plans to expand into the mobile gaming market, most notably into gambling and wagering for cold, hard cash using your mobile device.

You can find those goals smack dab in the middle of the Hop-on website: “Hop-on is gearing up to expand business into mobile gaming, SMS wagering and gambling programs for personal consumer cell phones, satellite TV and beyond!” 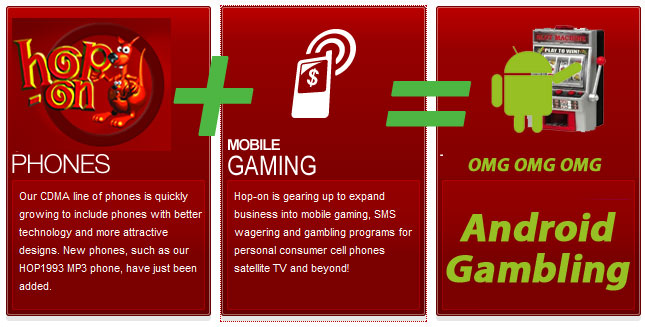 So where better than Las Vegas to launch a phone with a real, full mobile casino embedded and optimized directly on the device? Its an interesting possibility and one that we would VERY openly welcome out of mere amusement… without taking any possible social ills into account. Of course you won’t be likely to use this device in the United States… but what if the phone could detect that you’re in Las Vegas via GPS and only allow you to play in locations where gambling is legal?

But the plot thickens. The original article quotes a “Peter Michaels” as saying: “”Hop-on is committed in bringing the latesttechnology to the market, the Android open platform makes Hop-on competitivein the high end mobile phone market. This will create market value for ourshareholders.”

Nowhere does the article state who the heck Mr. Peter Michaels actually is. So, upon googling for this query:

I was somewhat disturbed when I read the description of the very first SERP result: 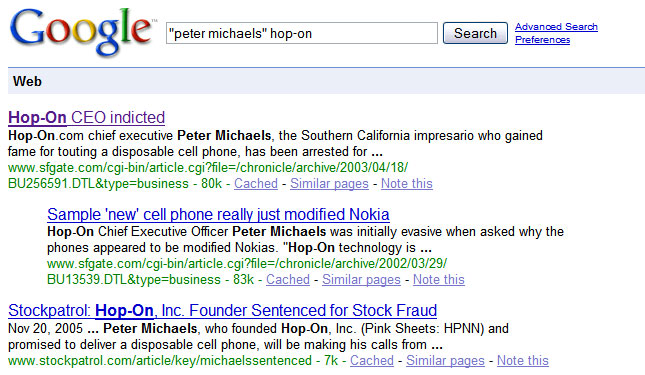 So to summarize the top 3 articles it looks like (we didn’t dig further):

The last article then says, “Once he has completed his 8 month jail term, Michaels will remain on probation for 3 years.”

Lets see… November 2005…. 8 months in jail… minus good behavior…. plus 3 years probation…. HMMMM… it seems that Peter Michaels may get off probation just in time for his little trip to Las Vegas.  Does this not sound very much like the story of Gizmondo we posted a few weeks back?

So after doing a little homework, I’m reluctant to put ANY faith in Hop-on’s efforts. And to be honest, even if the product and services are exceptional I would be reluctant to buy them. Actually, I wouldn’t buy them. Simply because I don’t want to support someone with this history when there are plenty of GOOD people out there doing the RIGHT thing who I could spend my money with.

We could be taking this bit of news a bit far, but its fun to think about the possibilities, isn’t it? In a way, that’s what Android is all about… opening up new possibilities. Its possible that Hop-on just has a regular phone on the way that uses Android and will at some point also release mobile apps, whether on the Android Market or elsewhere, that utilize mobile gambling. But combining the two sounds like an exciting synergy, don’t you think? As long as it doesn’t come with malicious software that takes your credit card info and uses it to buy another yacht.

We’re marking CES Las Vegas on our Calendar and hope to see something cool from Hop-on. If you attend the event, make sure you keep close tabs on your personal property while near the Hop-on booth. And while we’re waiting for that day to come, what do you think the company has brewing? And what do you think of the company’s (alledged) past?