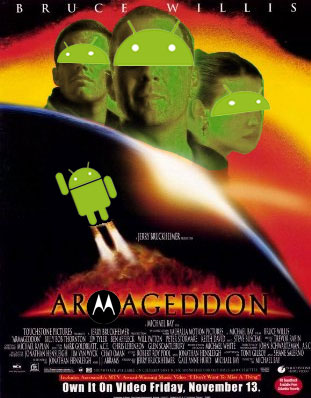 Ever see the movie Armageddon where an Asteroid the size of Texas is headed directly towards earth and the unlikely Bruce Willis and company are sent to blow the big rock to smithereens, saving humans from extinction? We thought so.

Pretend that Earth is Motorola, the Asteroid is the economy and Bruce Willis is Android… and that pretty much sums up how grim things are looking based on news reported by PhoneScoop:

Android truly could play the Bruce Willis hero part in all this, single-handedly reviving the company. Because the company won’t be at CTIA we can assume their Android offering won’t come until later… which we already knew. While its extremely encouraging that Android will be the sole operating system behind Motorola Smartphones it is bittersweet – nobody wants to find that out under these circumstances.

Say what you want about Motorola but they’re presence in the industry is needed. They’ve been a player for a long time and it wasn’t too long ago that their RAZR dominated the market. In fact, the RAZR is still dominating the market – even from a sales perspective. This is half of the reason we can’t figure out what the heck is going on.

How long can Motorola stay afloat? We recently saw Palm, a company also believed to be on its deathbed, receive $100 Million dollars in financing. They then announced the Palm Pre and Palm WebOS and analysts are now saying they are in a position to be one of the three dominant mobile operating systems of the future. While a turnaround like that isn’t likely, I’m praying Motorola lasts long enough to launch a couple Android offerings and revive the company. If they can somehow manage to get their wares on Verizon or AT&T, they could really, really be in luck.

But its also about timing. By Christmas 2009 it may, unfortunately, be too late. Keep in mind that the bulleted points above are merely heresay at the moment but we’ll keep you updated with the latest.