For years now, the mainstream drone market has belonged to DJI. The company wasn’t the first to market and has never offered the cheapest options, but it’s always found a way to deliver well-rounded drones that offer a well-rounded set of features while making the user experience as simple and seamless as possible.

Autel may not have the same market share or brand recognition as DJI, but the company has been hard at work for the past few years to prove that it can match DJI’s features with quality hardware.

The Autel EVO Lite+ is Autel’s answer to the DJI Air2 S, while also offering a 1-inch sensor while also promising 40 minutes of flight time. Priced at $1,549, it’s not exactly cheap, but it may be the only viable option if you’re looking for an alternative to DJI. 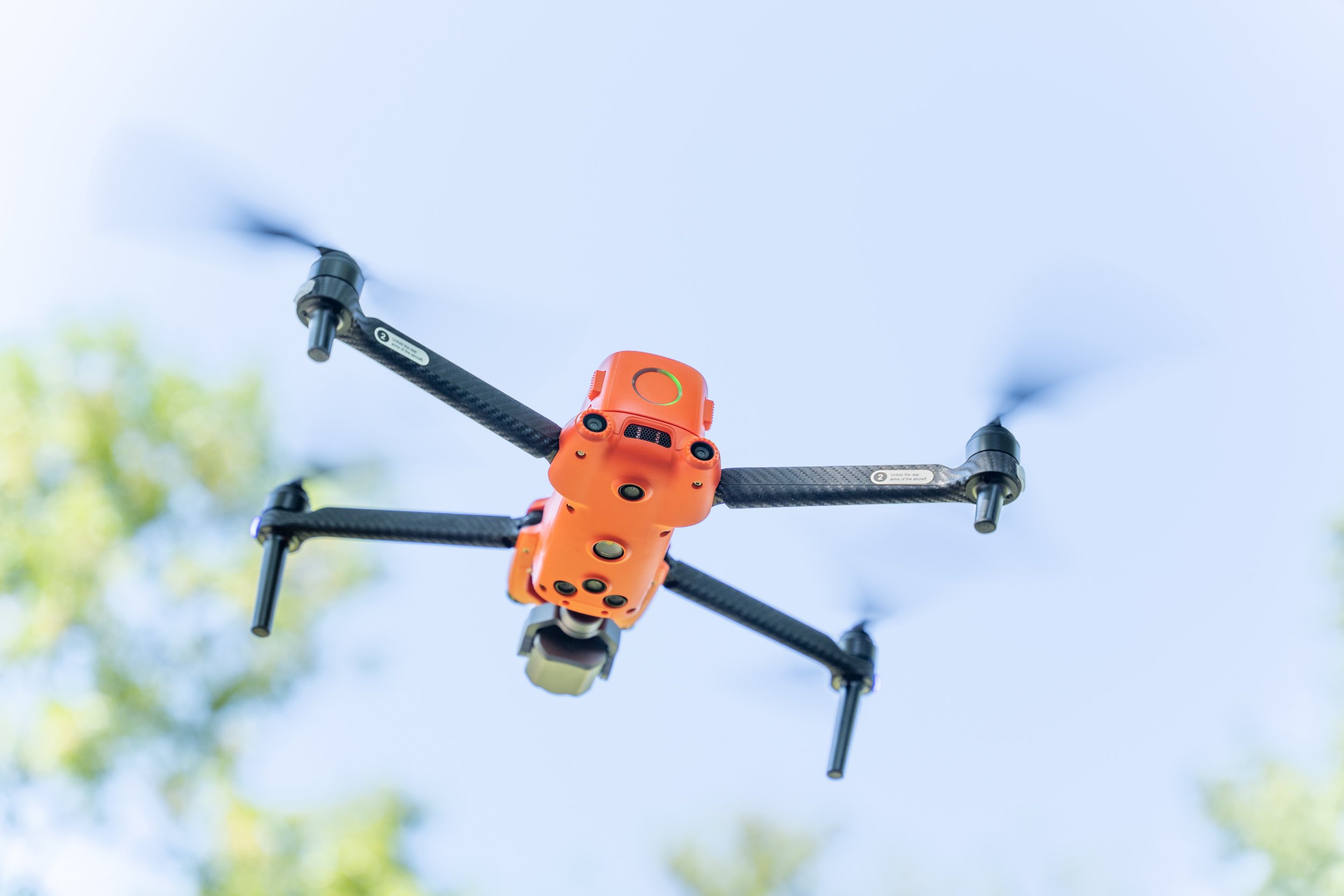 The Autel EVO Lite+ sports the classic foldable arm design that we’ve seen on drones for the past few years. The one we got in for review sported the Autel Orange finish, but you can also pick it up in Arctic White or Deep Space Gray. The orange is a bit flashy, but it does make the drone a lot more visible in the sky when compared to the other gray drones we’ve used in the past.

While you might be fooled by its carbon fiber arm, contrary to the name, the EVO Lite+ isn’t exactly light. The drone weighs in at 14.5 ounces (866 grams) and measures 8.3 inches x 4.5 inches x 3.5 inches when folded, making it more than a half pound heavier than DJI’s Mavic Air2 and quite a bit heavier as well. Most of that weight is due to the large battery, which can easily be swapped out by pressing the buttons on the side.

The front of the drone is dominated by the camera housing and gimbal. The drone also prominently features its obstacle avoidance sensors on the front, back, and bottom.

Compared to the competition, the EVO Lite+ looks quite aggressive. The overall durability is commendable as well as it’s held up quite nicely after I managed to accidentally crash it several trees. After tumbling to the ground from at least 30 feet, the only visible scuff I could find was on one of the propellers. 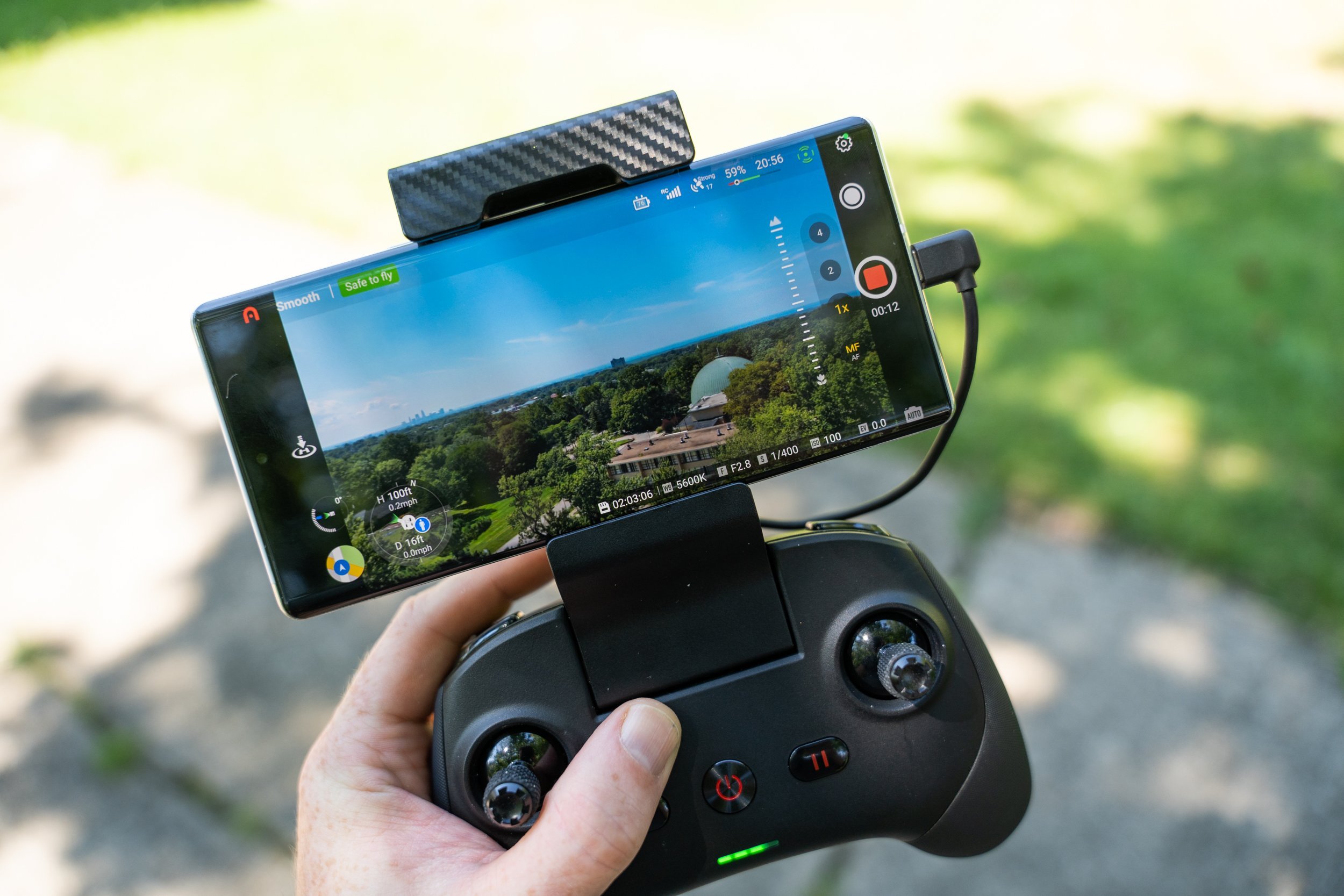 The remote that comes with the EVO Lite+ looks and feels more like a gaming console remote than the remotes you might have used with a DJI drone. It’s definitely not small and takes up quite a bit of room in your bag. It can get a little smaller if you detach the thumbstick, but you’ll need to make sure you keep a close eye on them as the remote doesn’t have a secure place for them to be stored.

Since this is a screenless remote, it features a smartphone holder on the top edge. Unlike dome older DJI remotes that didn’t work well with today’s oversized smartphones, this one here had no issues with devices like the Galaxy S22 Ultra and even worked fine with the minuscule Pixel 5. To connect the remote to your smartphone, Autel provides short cables that allow you to easily plug in an iPhone or Android device.

As for the controls and buttons, Autel really did a nice job. The directional thumb controls allow for extremely subtle movements of the drone and the scroll wheel for the gimbal allows you to dial into the exact camera movement you want.

At the end of the day, anyone who’s adept with a videogame controller will feel right at home when they pick up the EVO Lite+’s controller for the first time. 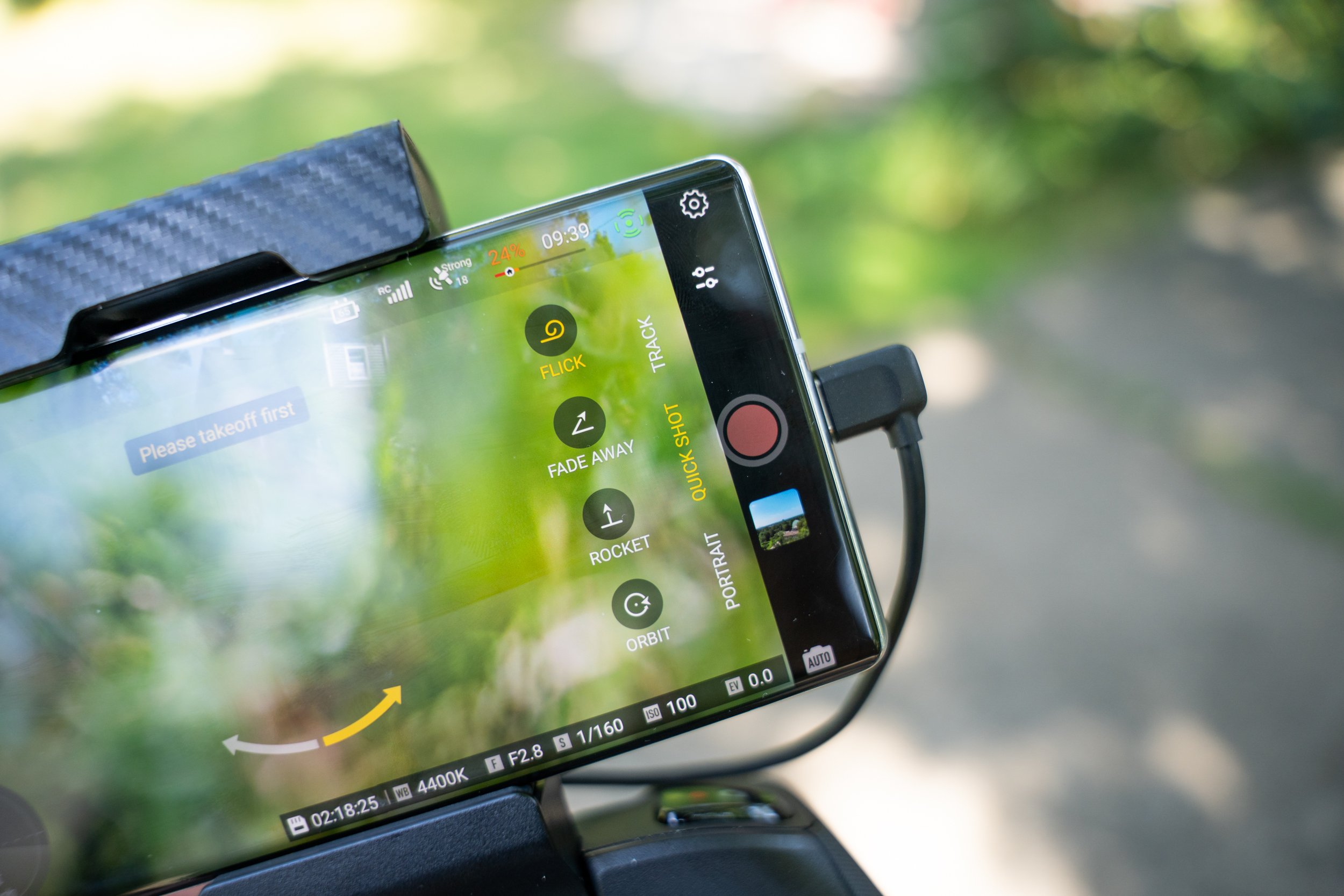 To fly the drone, you will need to download the Autel Sky app on your smartphone. Getting things set up and paired for the first time is extremely simple with the on-screen instructions.

The app comes with all the usual on-screen features you’d expect with the ability to quickly jump into the settings and switch things around, even while the drone is in the air.

Like the competition, the EVO Lite+ also offers a handful of Quick Shot modes like Fade Away, Flick, Orbit, Rocket, and Hyperlapse in addition to subject tracking. Just make sure you have enough room to use these features or that the drone is at the right height since it doesn’t have obstacle avoidance sensors on all sides.

All the features work exactly as advertised, but I did manage to crash the drone into a tree when using the Orbit mode since I miscalculated how high the drone was.

Object tracking isn’t as sophisticated as it is on other drones since it currently it’s only able to track people. This means you won’t be able to track a movie vehicle or other non-human object. It’s also limited to just tracking from behind. If you happen to turn around and walk towards the drone, it starts moving erratically, swinging from side to side, in an attempt to get behind you.

I wasn’t aware of this limitation during my testing and the drone narrowly avoided a fatal crash with a brick wall.

The EVO Lite+ is also capable of capturing the usual multi-image panoramic shots and also has a shallow-depth-of-field portrait mode. Autel has also designed a night shot feature that uses multiple exposures in low-light situations. 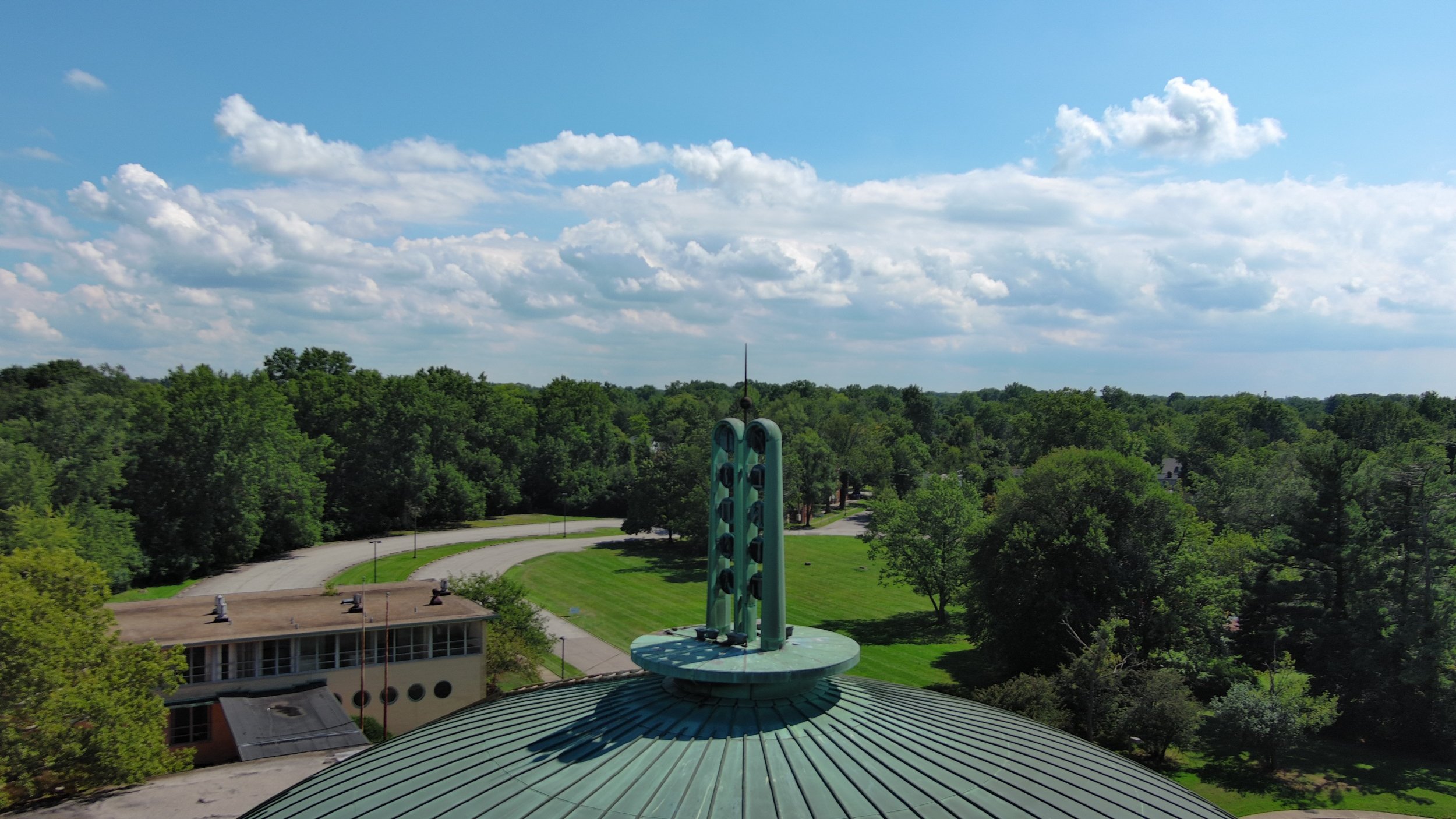 When it comes to the drone’s imaging capabilities, Autel has delivered a 20MP 1-inch sensor that’s coupled with a 29mm lens with an adjustable f/2.8 – f/11 aperture. As you can imagine, a sensor of this size is capable of delivering some impressive footage and some decent images as well. The larger sensor size makes it ideal for filming in challenging lighting conditions since it allows for better dynamic range and low light performance. This means that the drone is able to capture more detail in areas covered in shadows, something that many drones struggle with.

Autel does have a collection of ND filters that they will sell you, but I found that the variable aperture did the job in most cases. You’ll really only need the ND filters if you’re planning on getting a shallow depth of field while shooting close to f/2.8, but you’ll definitely need to be flying within 10-12 feet for the depth of field to be noticeable.

You’ll be able to capture 5.4K/30 fps, but I usually recorded everything at 4K/60. There’s also an option to capture 1080p/120 if you’re looking for slow-motion video. While the drone’s camera is limited to 8-bit color depth, the results are really good. The detailed color profile is well-balanced, crisp, and evenly saturated.

Autel does allow for full customization of the color profile and a Log color profile for those who want to be able to capture a flatter color profile and then edit it later. For those who don’t want to hassle with that and simply want video clips that they’ll be able to share right away, the HDR option works incredibly well. The images and video look bright and colorful, matching what most of us are used to seeing when recording videos on our smartphones. 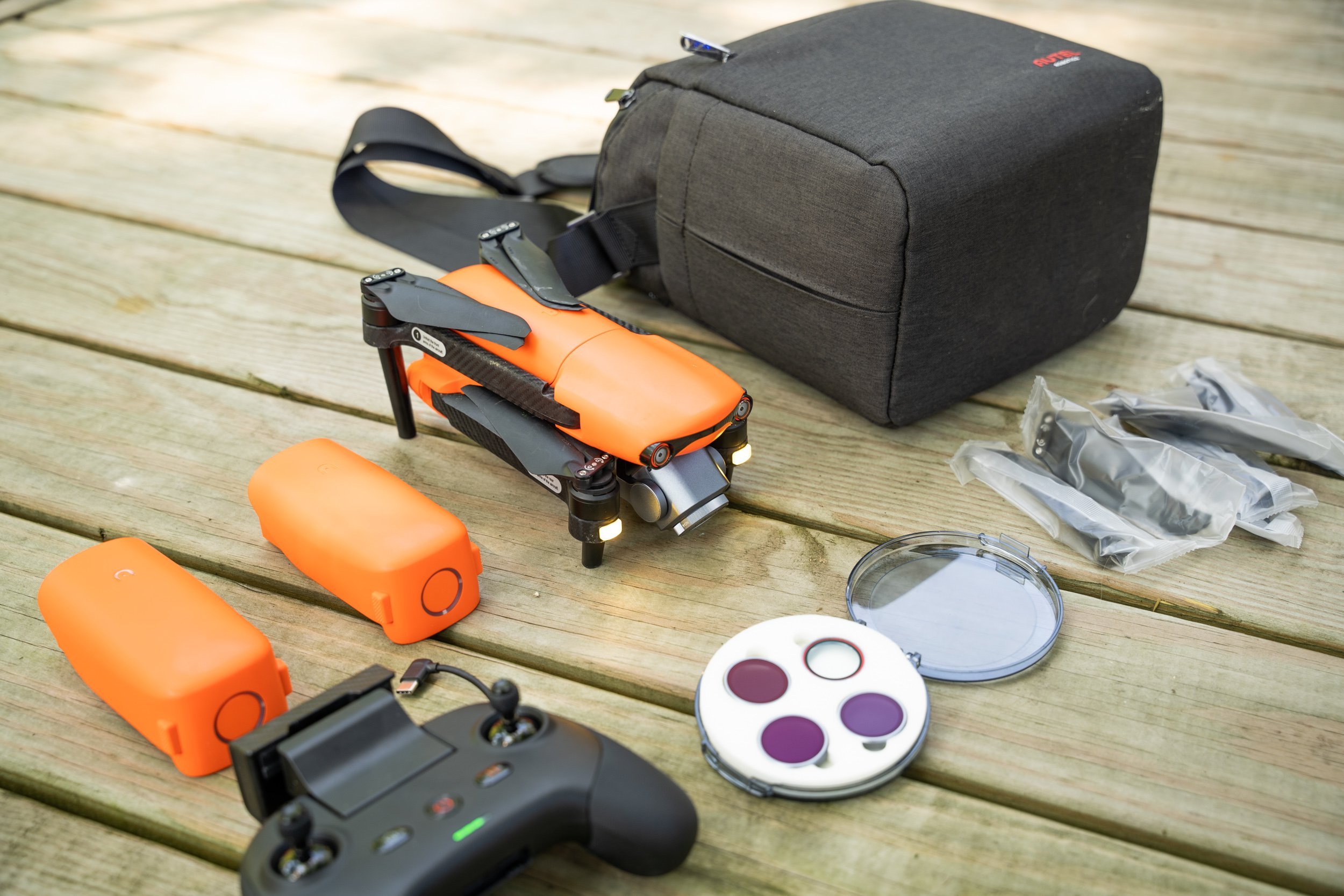 Keep in mind that the drone’s automatic return to home feature is triggered once the battery hits the 25% mark. You can always ignore it or disable the feature in the app, but we like keeping it on for peace of mind.

The remote will typically last 90 minutes between charges. If you pick up the Autel EVO Lite+ Premium Bundle, which includes 3 batteries, the controller will likely die right before the drone depletes the final battery.

As someone who’s exclusively flown DJI drones for the past 6 years, I was very impressed with the Autel EVO Lite+. The fit and finish of the hardware is superb and the controller is incredibly comfortable. I really wasn’t expecting such a refined product from a brand that so few people have heard of… so far. If you’re buying this drone purely for the video and image quality, you’ll be very happy with the results, but if you’re new to drones and want something that’s simple to use, DJI has a few options that may be better suited for you.

Autel has put in a lot of work to prioritize the flight time and camera capabilities of the EVO Lite+. The software is good, but the Autel team needs to put in a little more work to catch up to the competition.

If you’re an experienced drone pilot on the market for a drone with a 1-inch sensor for better overall video quality, the Autel EVO Lite+ could be the perfect drone for you.