Last year, Nothing burst onto the tech scene with its popular Ear (1) earbuds, which provide a unique take on the truly wireless earbud. From the transparent design to sporting features found in options that are much more expensive, these headphones are just a sign that Nothing is “warming up”. Today, Nothing announced that it has raised $70 million in its Series B funding round, while also confirming that there’s more in the pipeline. Nothing will host an event on March 23, where it intends to share “further announcements about its 2022 roadmap”.

“With this round of financing, we have the fuel to realise the next phase of our vision of a seamless digital future,” said Carl Pei, Nothing CEO and Co-founder. “I’m grateful for the support from our community and investors. Our first year was a warmup, and we can’t wait to reveal what we’re building at Nothing during the upcoming event.”

As you would expect, Nothing provided little insight as to what could be shown off during this event, but it’s easy to assume that we’ll get our first official look at the Nothing Phone. A report from TechCrunch claimed that Nothing executives were at MWC to try and show off some prototypes about what was in the works. Then, an image was leaked where Carl Pei was spotted presumably showing off a phone of some kind to Qualcomm’s CEO Cristiano Amon.

Last year, Nothing India GM Manu Sharma confirmed that there were at least five new products in active development, but stopped short of revealing what those products were. Considering Pei’s background in the tech industry, along with who has invested in the company so far, it only makes sense for the Nothing Phone to show up at this upcoming event.

Nothing’s “The Truth” event will take place at 14:00 GMT (9 AM EST) and you can head over to the Nothing website if you want to be notified when the event begins. 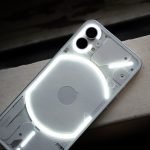