With the sheer number of truly wireless earbuds on the market, you might think that the category has been around for decades. THat’s definitely not the case as the first products we got that created the new category didn’t show up until 2015. But growth within the category has been explosive, so much so that Carl Pei, the co-founder of OnePlus, started a brand new company and is betting everything (technically Nothing) but featuring a pair of true wireless earbuds as their first product out of the gate.

Say hello to the Nothing Ear 1 – a pair of $99 true wireless earbuds that just might deliver what’s needed to take on the competition. 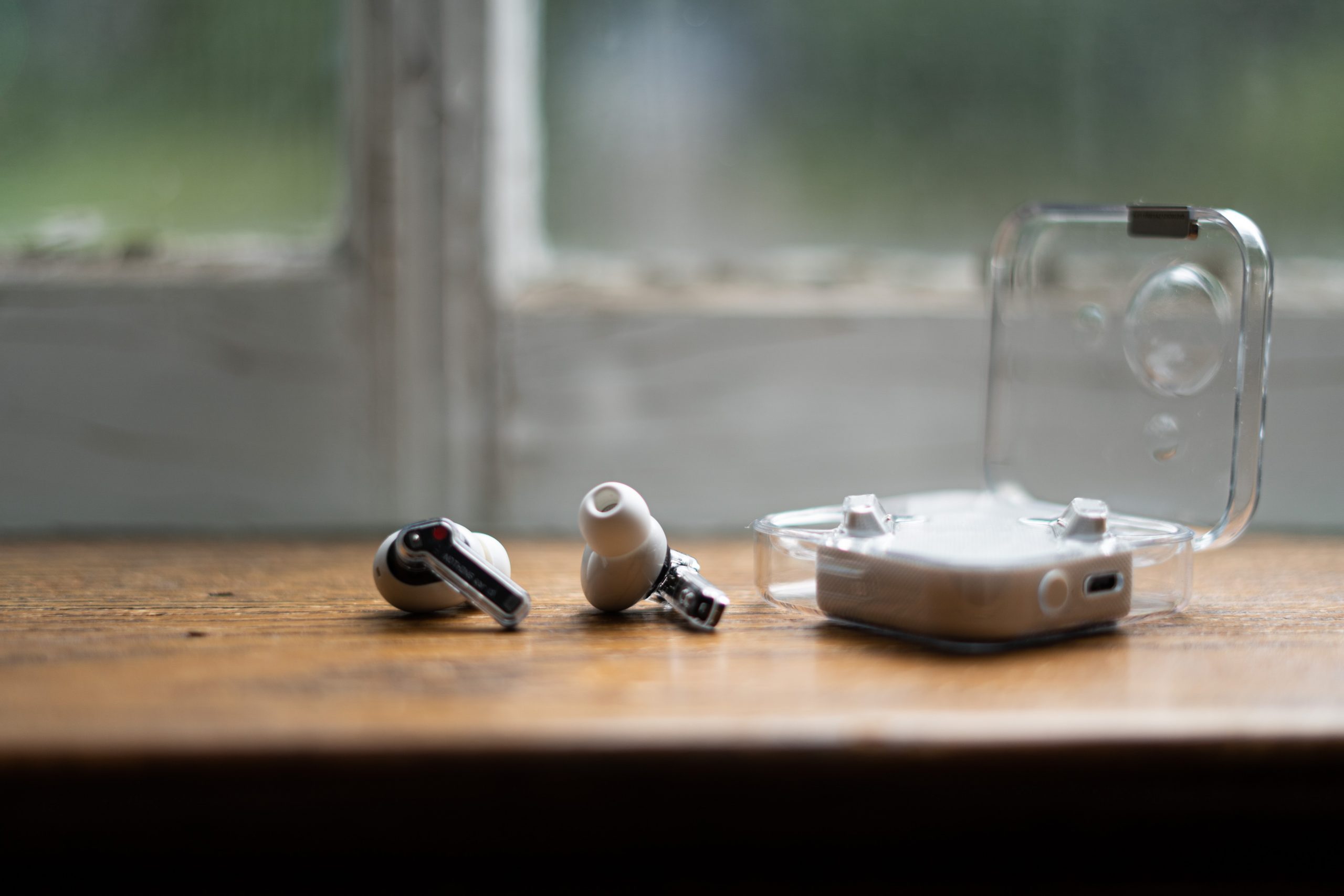 Within the tech community, the launch of the Nothing Ear 1 was by far the most-hyped launch within the category that we’ve seen since Apple’s AirPods Pro was introduced. Since the retail launch in late August, Nothing has been scrambling to keep up with demand, but there’s little indication as to how many sets they’ve actually sold.

So that’s the hype all about?

On paper, the Nothing Ear 1 earbuds aren’t really that special. They offer 11.6mm, dynamic drivers, with a graphene diaphragm, and are tuned by Teenage Engineering with hybrid noise cancelation. Then, these feature three microphones for environmental noise cancelation when you’re on a voice or video call, active noise cancellation, and up to 34 hours of battery life when you factor in the charging case.

What makes these earbuds different from anything else on the market comes down to the transparent design. Nothing has put in a lot of extra work to deliver a product that’s completely unique when compared to the countless white and black earbuds on the market. The first step of the process in delivering the unique look is obviously making the shell of the buds clear, but Nothing has taken things multiple steps forward by paying close attention to the interior look, highlighting the circuit board, magnets, microphones, and other miniature details as well. And all of this is done without exposing a single drop of glue that’s used to hold the earbuds together. 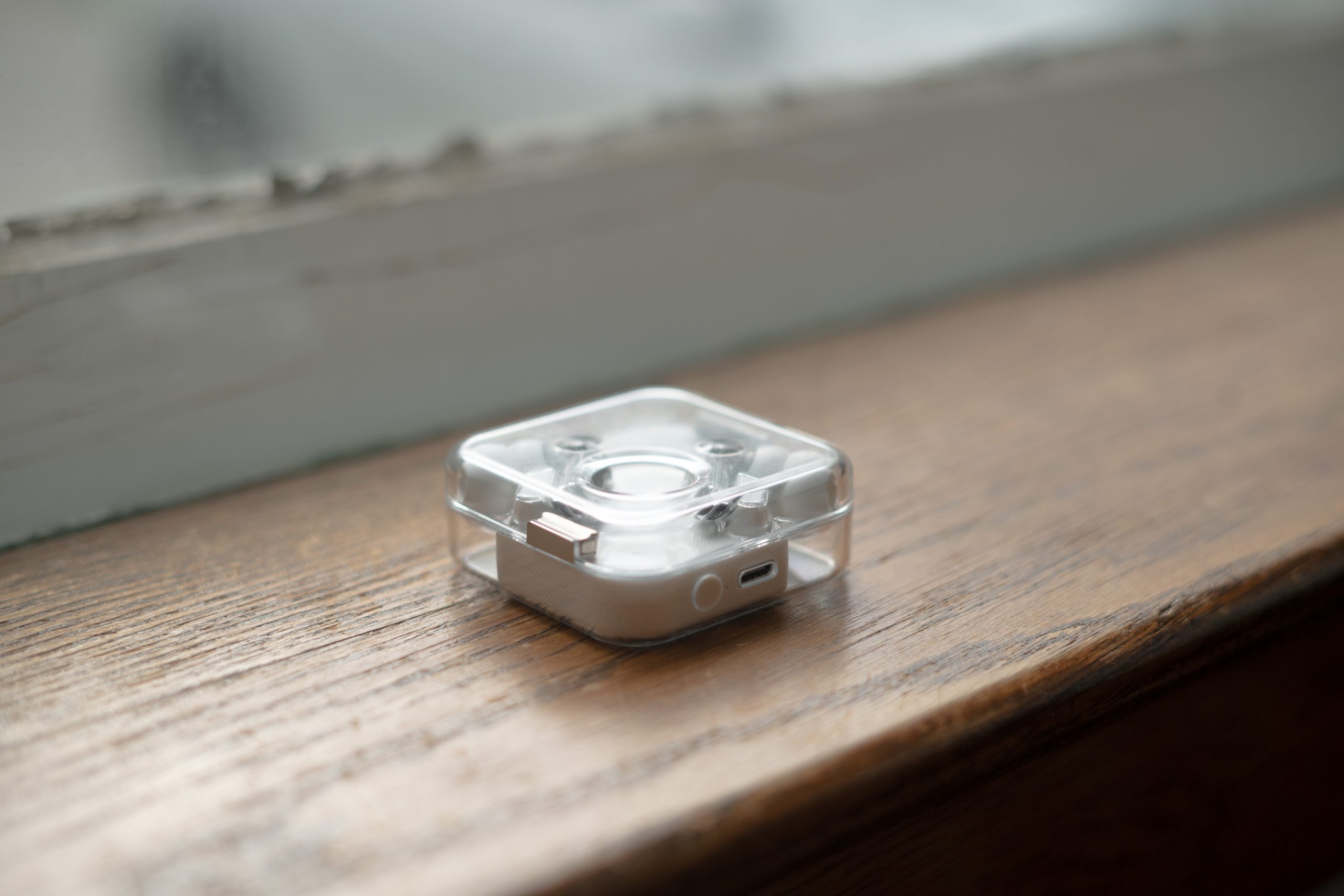 This attention to detail carries over to the case as well when the transparent shell shows off the earbuds on the inside and the internal white shell which houses the battery and wireless charging coil. If it was me, I would have found a way to highlight the charging coil in some way, but I guess they wanted to save something for the next iteration down the road.

While the case does look good, it’s probably one of my least favorite features about these earbuds. There’s an issue with the buds aligning properly which I’ll cover in a bit, but the overall size and shape of the case make it one of the most uncomfortable earbud cases to put in your pocket. Compared to the competition, it’s pretty massive and the overall footprint means you’ll definitely feel it in your pocket every time you sit down.

In the time I’ve had with these, the case has gotten a number of micro-scratches and I’ve honestly been pretty careful with this, mainly using inside the house. I can imagine the transparent case will definitely be picking up a lot more scratches as time goes on and will likely look pretty rough after a year or two.

But enough about the looks and the design. How well do the earbuds actually perform?

If you’re looking for incredible audio quality and amazing noise cancellation, the Nothing Ear 1’s will leave you disappointed. But that’s to be expected since we’re talking about a $99 pair of earbuds. 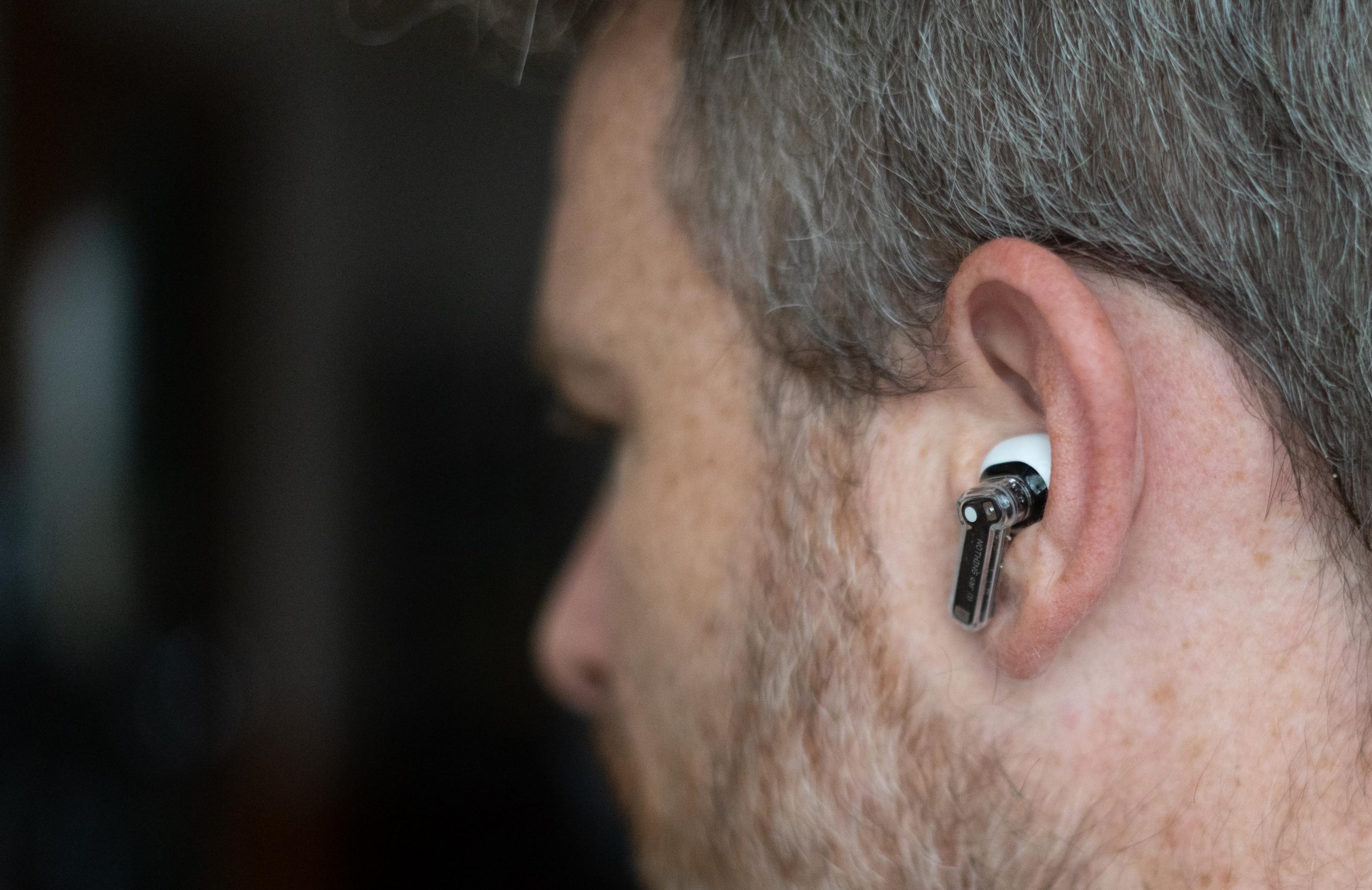 I have to say that Teenage Engineering has done a decent job with the 11.6mm dynamic drivers inside the buds, giving you a pretty wide soundstage to separate the highs and the lows, but you’ll definitely notice the difference between these and the Sony WF-1000 MX4 which cost $150 more. What you get from Nothing is average sound quality for the average listener who’s not willing to shell out the extra cash needed to take the audio experience to the next level.

That same statement holds true for the active noise cancelation. Switching ANC on will give you a noticeable difference in the amount of ambient noise that passes through the seal of the earbuds. It does a much better job with low pitch noises, but if all you want is a little more of a sound barrier between our music and the world around you, these will definitely do the job.

The noise cancelation carries over to voice calls as well with an AI algorithms that are supposed to help stop people on the other line from hearing all the chaos around you. It does seem to work, at least a little, but the buds could have benefitted from using higher-quality mics to pick up the sound of your voice and make that clearer.

Like the competition, the stems of the earbuds are touch-sensitive with a double-tap, triple-tap, tap and hold, and slide gestures to control your music, noise cancellation modes, and volume. I never had any issues with the controls when I wanted to use them, but the in-ear detection feature is definitely too sensitive as it activates on its own while walking down a flight of stairs or while running, every 2-3 minutes. I have confirmed that this issue is affecting more than just my unit. There is a fix if you’re willing to turn off in-ear detection in the app, but then you lose the benefit of your music or podcast automatically pausing when you intentionally pull the buds out of your ears. The issue has persisted after software updates as well, but I’m hoping Nothing is able to deliver a fix in the future. 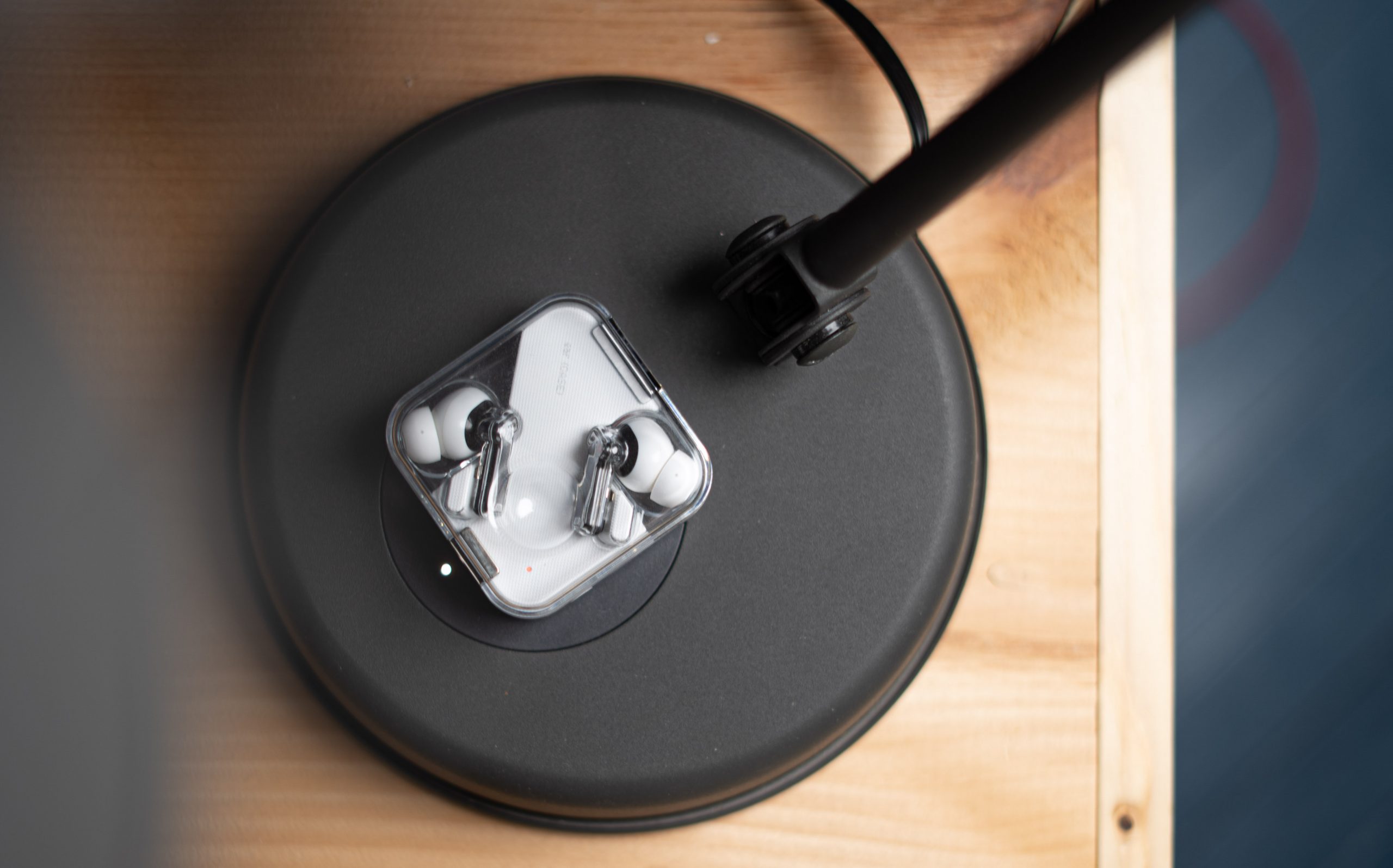 I’ve also had issues with the buds not charging when placed inside the case. If you’re not careful and just casually place these in the case and close the lid, there seems to be a 10-15% chance that the buds won’t line up perfectly with the charging pins. This will keep that one earbud connected to your phone while the other one charges. Having used these earbuds daily for over a month now, I’ve removed them from my case and placed them in my ears nearly a dozen times only to find out the one bud was completely dead while the other was fully charged. I’m not sure what Nothing can do to fix this issue besides tweaking the design to make sure the magnets in the case can align the buds perfectly every time.

When it comes to battery life, the Nothing Ear 1 buds deliver pretty average listening times with 4 hours of playback with ANC on and just over 5.5 hours with ANC switched off. The case adds an additional 5 charges, so most people should be able to make it through a week before needing to charge the case.

I only depleted the case twice since Nothing is one of the few brands to include wireless charging at this price point. It may sound like a little thing, but being able to plop the case down on the wireless charger on my desk, nightstand or even the back of a phone that offers reverse wireless charging means you’ll always have enough battery to top off the earbuds when you’re done listening. 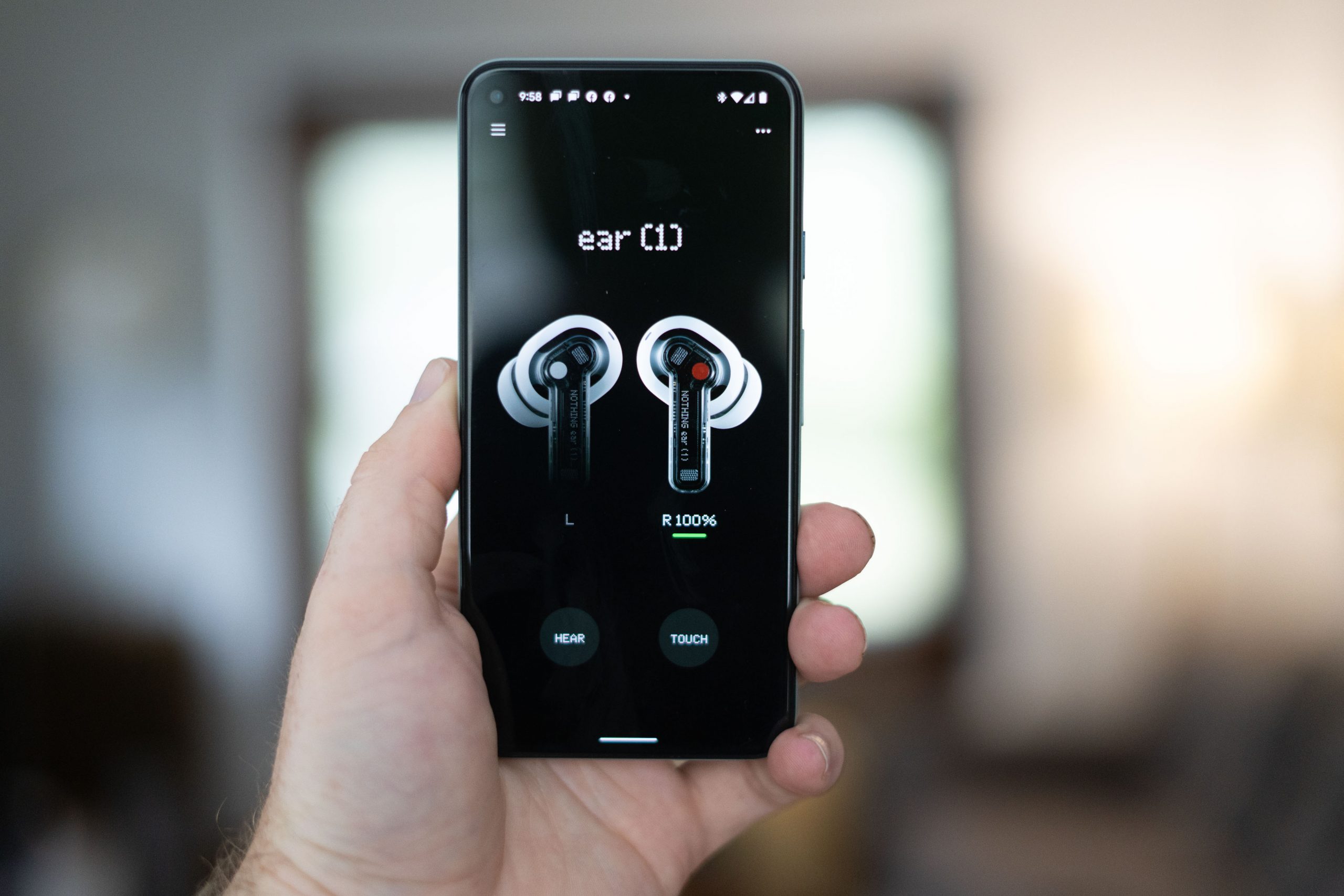 To go with the buds and the case, the Nothing app is also pretty minimalistic, giving you the option to customize the touch controls, choose between a few different EQ settings and change the different noise cancellation options. I think Nothing really missed out on the opportunity to deliver individualized audio turning as we’ve seen from other players in the space which could have also led to better overall audio. One app feature I do like is Find My Earbuds which plays a high-pitched alarm from each bud to what you can quickly find them if to dropped them behind the couch or simply forgot them somewhere in the house without putting them back in the case

On the surface, the Nothing Ear 1s doesn’t really offer anything new to the true wireless earbuds space. They deliver average sound, battery life, and noise cancellation. But when you take a step back and consider you get wireless charging as well, the value is certainly there when you factor in the $99 price tag. The Nothing ear 1 competitors are all priced right around $150, making these a pretty good deal if you’re on a budget and want a pair of earbuds that will truly stand out in a crowd.

I’m not sure if the Nothing Ear 1 buds are the breakout success that Carl Pei was hoping they would be, but it’s definitely a good start for the new company. If this product is an indication of what Nothing will be bringing to market in the future, we should expect average products with a focus on design and a pretty attractive price point.