It’s not often that a phone comes across my desk that really provides an interesting and unique experience as soon as I looked at the box. But that’s exactly what happened with the Vivo V23, as the box itself is covered in sparkles to add a bit of flair or “pizazz”.

Vivo has been on a tear as of late, as the company’s flagship offering, the Vivo X70 Pro Plus, continues to impress with its unique camera system. But Vivo also has a strong foothold in the budget and mid-range segments, and that’s where the Vivo V23 falls in. 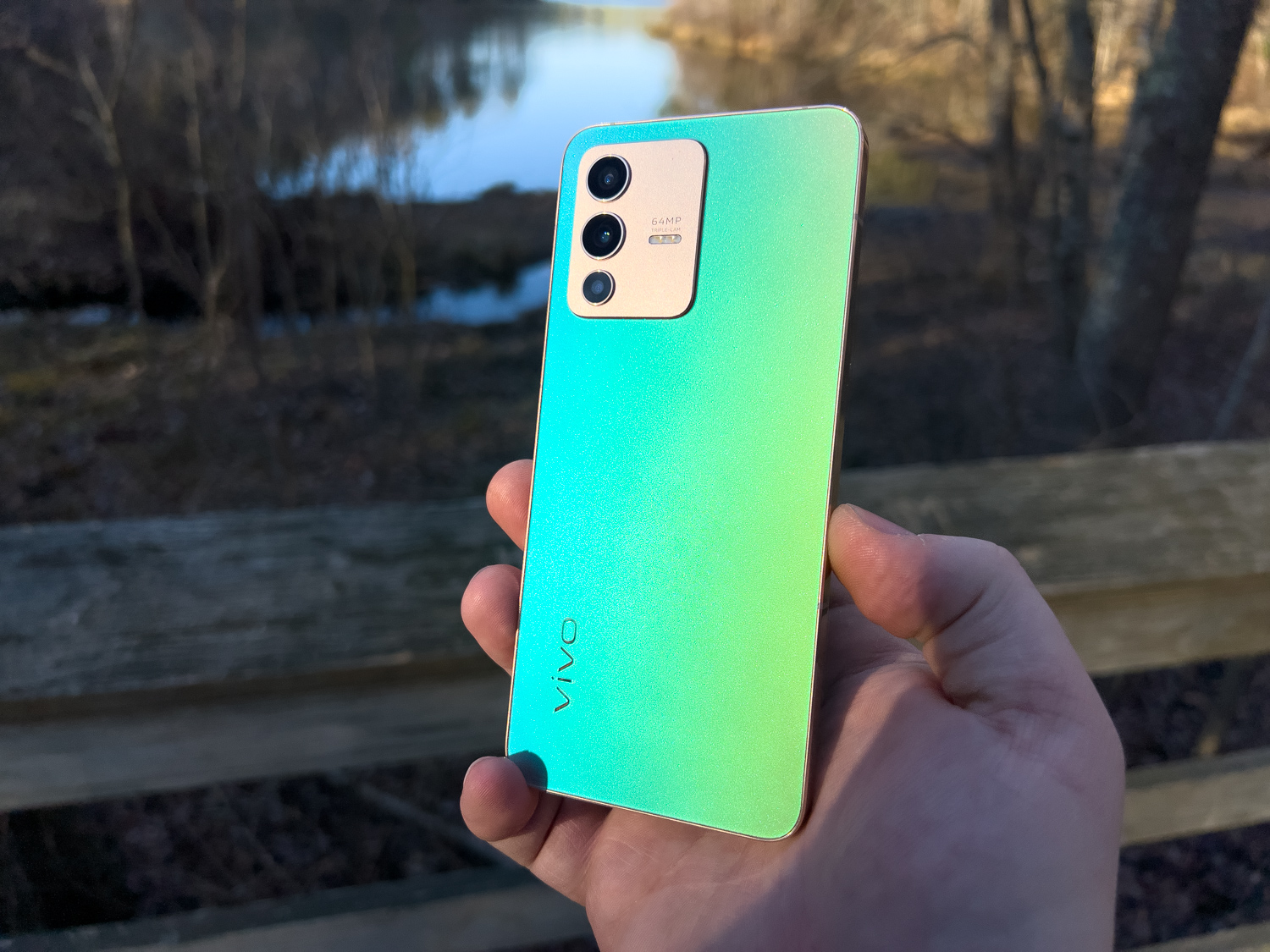 Even as someone who uses an iPhone on a daily basis, one of my biggest complaints is how sharp the corners and edges are. Using the iPhone 13 Pro Max without a case is definitely not recommended as the edges just dig into the palm of your hand. Needless to say, I was a bit shocked to see that Vivo adopted this same design.

Don’t get me wrong, it’s great for pictures, as I don’t need to put anything behind the phone in order to get it to stand up. But even for a phone that’s quite a bit smaller than Apple’s largest iPhone, it’s not exactly a comfortable experience.

The V23 does have one awesome “feature” that helps the phone stand out from the crowd and that’s the glittery, color-changing back glass. According to Vivo, the phone is covered in a material that can absorb UV rays and temporarily change the pigment. But this goes to another level when you just move the phone around as it changes colors depending on the angle that you’re looking at it. 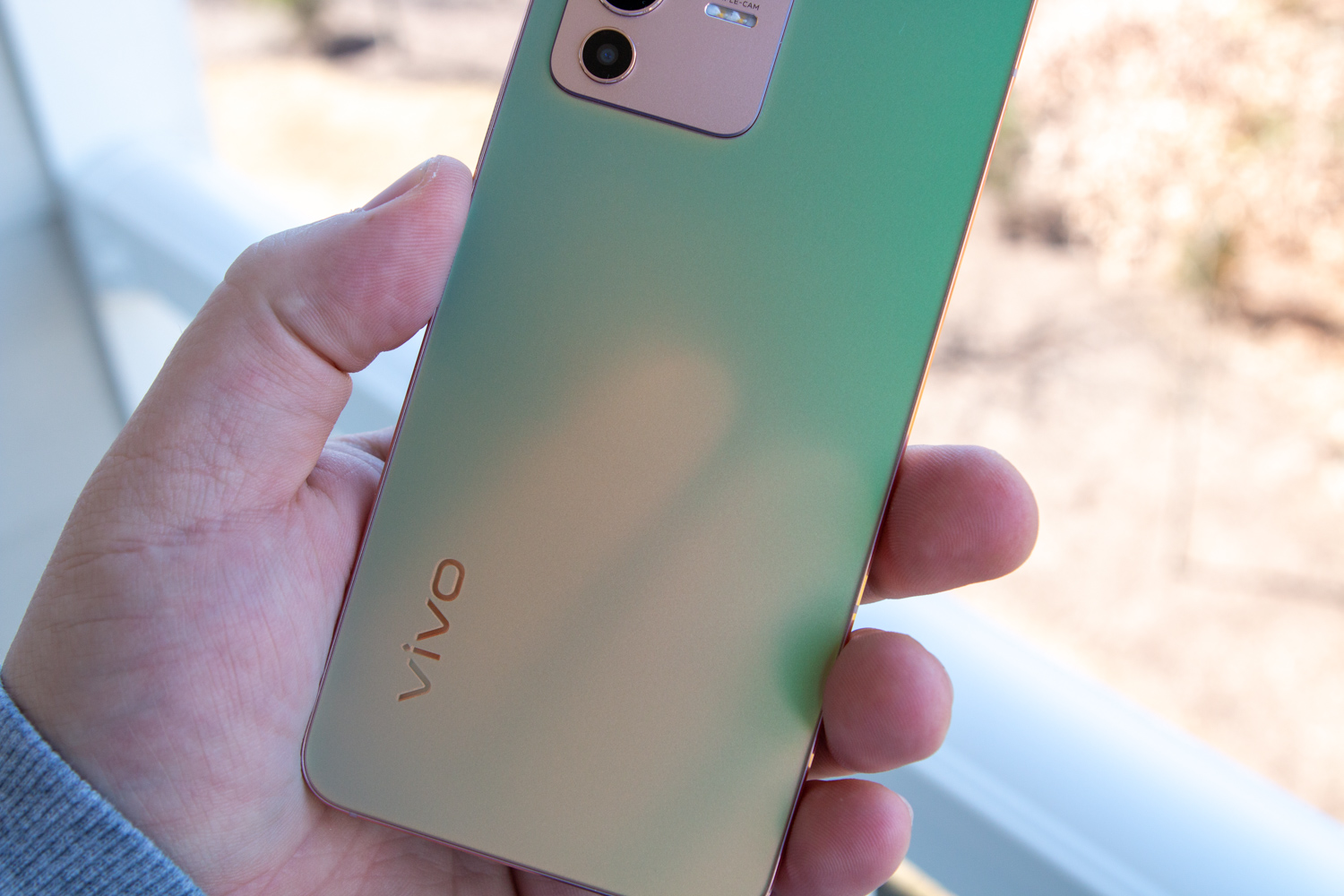 Color-changing backs are a trend that has seemingly come out of nowhere, and we’re here for it. And thanks to the soft textured finish, you won’t ruin the look with a bunch of fingerprints. Instead, that was saved for the frame which is polished aluminum and you’ll end up seeing a fingerprint even if you look at it the wrong way.

Moving to the front of the phone, there’s really not much to write home about. Vivo is using a 6.44-inch AMOLED display with a 90Hz refresh rate and an FHD+ resolution. You might be surprised to see that there’s an actual notch at the top, and that’s for good reason.

With the Vivo V23, the company put more of an emphasis on selfies and having a pretty phone than anything else. Hidden in the notch on the display are two cameras, with one 50MP wide-angle lens and an 8MP ultra-wide sensor. All-in-all, the notch isn’t that intrusive, and most of the time it’s hidden while you’re in an app thanks to Vivo’s software tweaks to make it blend in with the status bar. As MediaTek continues to try and chase down Qualcomm, we’re seeing new mid-range and “upper mid-range” chipsets released along with the flagship options. This is the category that the Vivo V23 and its Dimensity 920 chipset fall in, but until now, only Realme and Xiaomi have used this processor.

While the phone is fast enough during daily usage, and easily switches between apps without as much as a hiccup, this is pretty much true about every Android smartphone available today. Where the differences really start to show is in gaming or when using resource-intensive apps.

We put the Vivo V23 through a series of benchmarks, which provided the following results:

Out of all of the phones that we have tested over the past year, there aren’t many that the Vivo V23 can beat. Xiaomi’s Redmi Note 10 Pro, the TCL 20 SE, and the Infinix Zero X Pro are just a few of the names that the Vivo V23 does outperform. That’s not to say that the Vivo V23 is a bad experience in any sense, but instead points to the fact that this phone is not designed to be a performance beast. For most, the V23 is more than powerful enough to handle whatever daily tasks that you throw at it. But you might want to be prepared to deal with the occasional hiccup or stutter every once in a while. This is just one phone, but hopefully, these results aren’t indicative of MediaTek still being behind Qualcomm in this segment.

Battery life was something else entirely, as I really couldn’t believe how long the V23 lasted. It wasn’t just running the standard PCMark Battery Test, but also using the phone I was able to easily get more than a day regardless of how much I actually used the phone. While the V23 isn’t intended to be a beast in the camera department, it does offer a bit of flexibility with its triple camera array. There’s a 64MP main shooter that does most of the heavy-lifting, while also being accompanied by an 8MP ultra-wide lens and 2MP macro. Frankly, this might just be one of the few times where I didn’t really have any complaints from the camera.

The only “hiccup” that I experienced came following a software update for the phone that caused the camera app to not work properly until I restarted the phone. It was a one-off that was likely caused by the whole “system optimization” that can occur after a software update is installed, but I didn’t experience that problem again. The Vivo V23 gets praise for its sleek design with the color-changing back that definitely turns some heads while you’re out and about. The integration of a notch on the display takes a bit of time to get used to, but if you’ve used an iPhone in recent years, you probably won’t even notice it.

With the display, you’re getting a solid panel complete with a 90Hz refresh rate that only stutters when scrolling through Twitter. But that’s a Twitter problem as it happens on pretty much any phone, regardless of whether it’s a $1,800 phone or one that comes in around $450 (converted). Battery life is much better than I expected, and all-in-all, the phone was really just a joy to use.

The problem is that it still feels a bit too expensive for my taste. With options like the Nord 2 CE available for less than $400 (converted), and even the Pixel 5a for the same price, there’s just not enough to make the V23 stand above the crowd. That is unless you really want a unique design with a color-changing back.

The Vivo V23 is a pretty solid, all-around phone for you to consider if you’re looking to spend less than $500. The cameras are fast and reliable, the software is Vivo-centric but okay, and the battery will easily last you more than a day. But that color-changing back is something truly unique and awesome.