Realme has quickly become a household name in the smartphone space, but the company has ambitions to break into the laptop segment as well with the Realme Book Slim. This isn’t quite as unexpected as it might seem since Xiaomi did the same things a few years back. Rather than go after the budget segment where there’s quite a bit of competition and razor-thin profit margins, the Realme Book is positioned as a premium, mid-range laptop with a pretty familiar design. 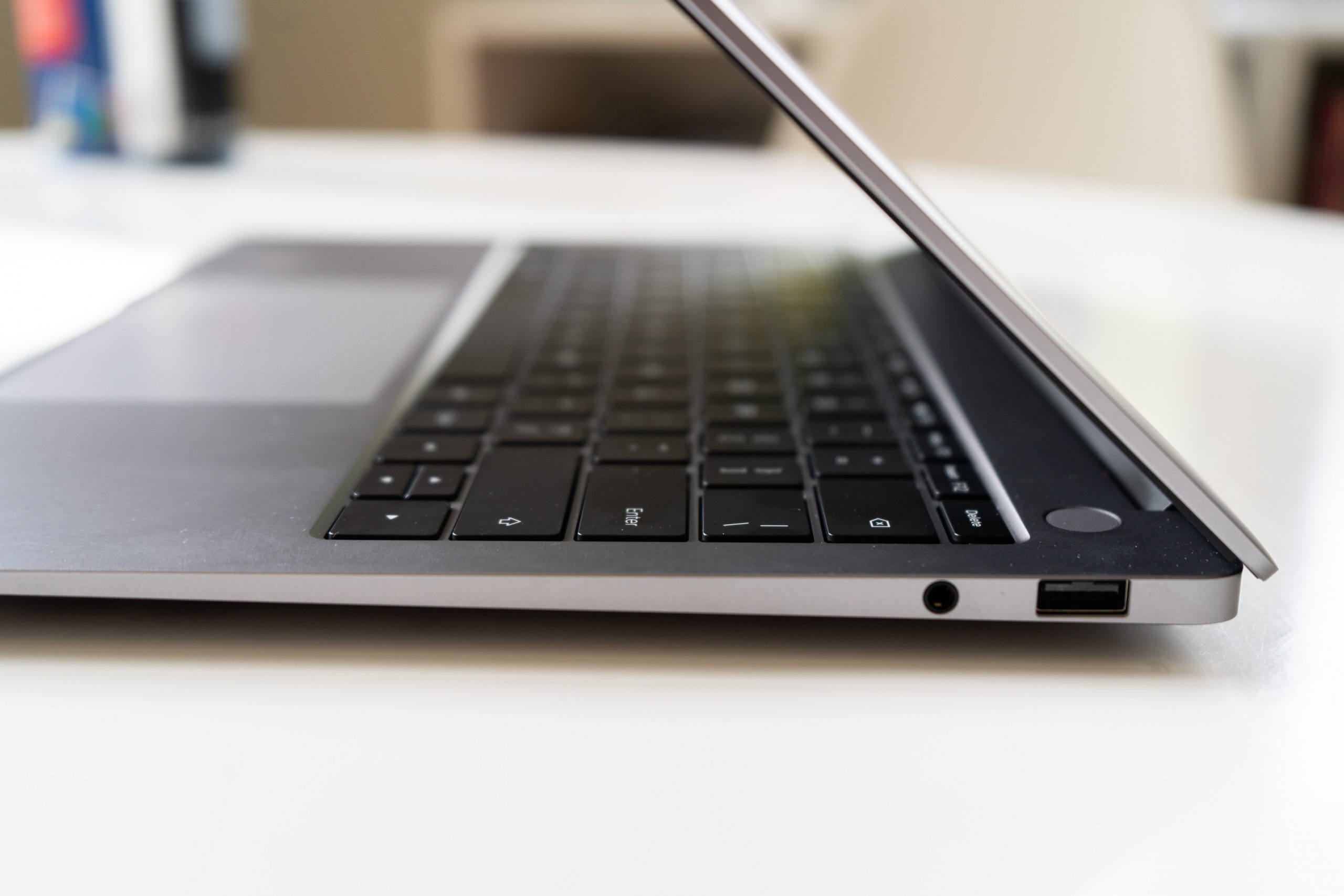 Like many other Chines manufacturers, the Realme Book Slim comes with a lot of design features that are reminiscent of Apple’s MacBook lineup. The body is mostly metal with a silver/gray finish, black keys and trim around the display. There’s also a large trackpad with a chamfered cutout below it to make it easier to open the lid and a circular power button that also doubles as a Windows Hello fingerprint sensor.

The design isn’t bad, but we’ve essentially seen the same exact laptop from Huawei, Honor, and Xiaomi. If you removed the logos from any of these devices, it would be nearly impossible to tell them apart. If you do want a laptop to stand out a bit, Realme does have a blue color option. I haven’t seen it in person, but the images definitely make it look more compelling than the bland black and gray option I was sent.

Other than that, my only complaint is with the keyboard. It offers a pleasurable typing experience, as long as you’re not too picky about the sound when you’re typing away. The keys are definitely a lot louder than I’m typically used to from a device in this category. I’m not saying the key presses should be completely muted, but it’s pretty obvious that the design team didn’t spend a lot of effort in delivering a more premium sound experience. 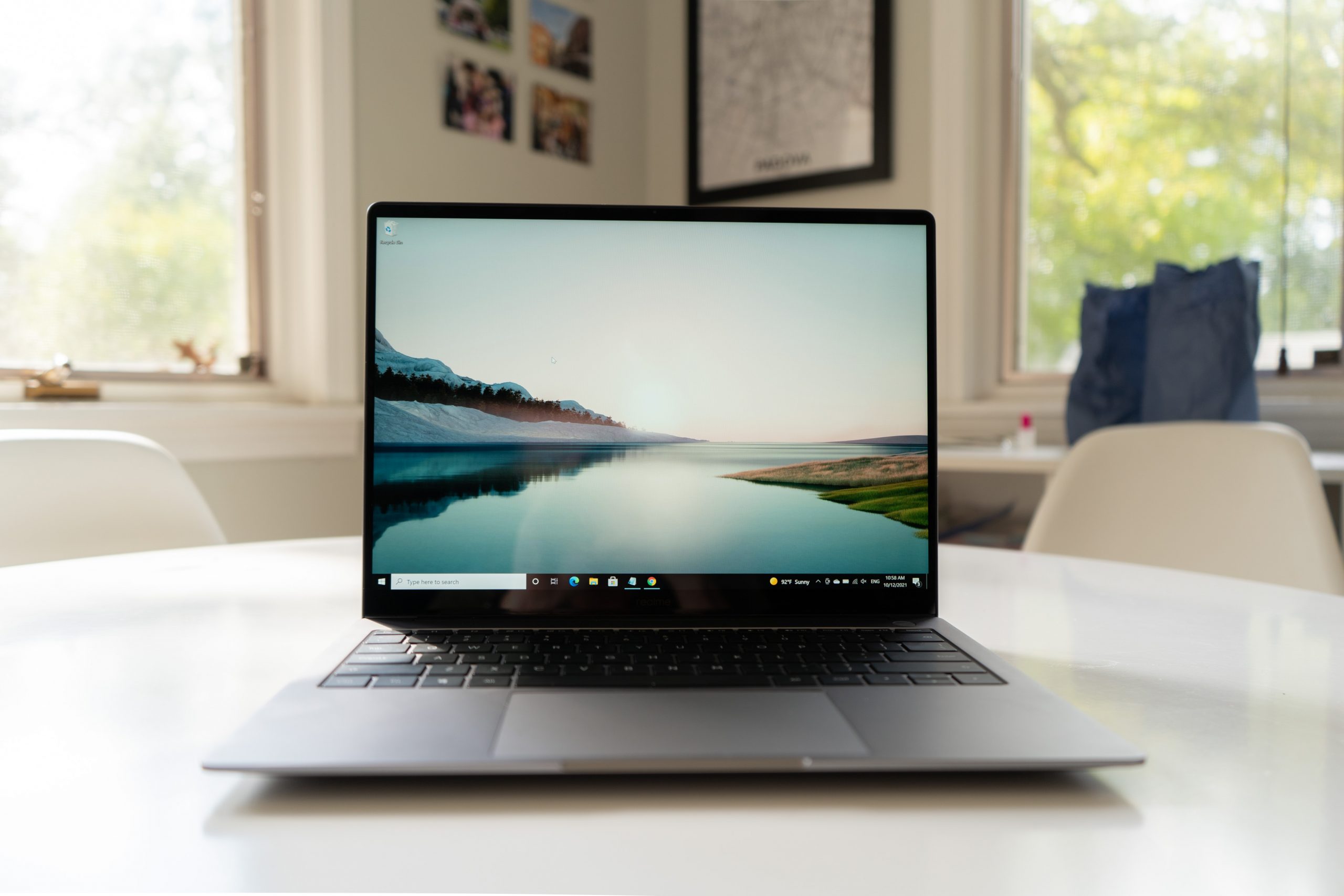 The 14-inch display with its 2160 × 1440 resolution doesn’t sound like it would be a standout feature, but Realme has sourced a pretty high-quality IPS panel that looks quite stunning. Some people might take issue with it not offering a 16:9 aspect ratio, but if you’re looking for a device that’s intended primarily to get work done or surf the web, the taller display is built just for that.

The display also manages to deliver a 90% screen-to-body ratio with 5.3mm bezels on the sides and only 8.45mm on the top. The extra space above the display is used to house the 720p webcam. The webcam isn’t particularly great, especially if the lighting isn’t ideal, but it’ll get the job done if you have dozens of video calls per week like I do.

Despite the fact that this is a Windows laptop with a glossy finish on the display, it’s not a touch screen. While it does offer a premium look and feel, a matte finish would have been better for reduced glare, especially for those looking in offices or coffee shops with a lot of natural light. 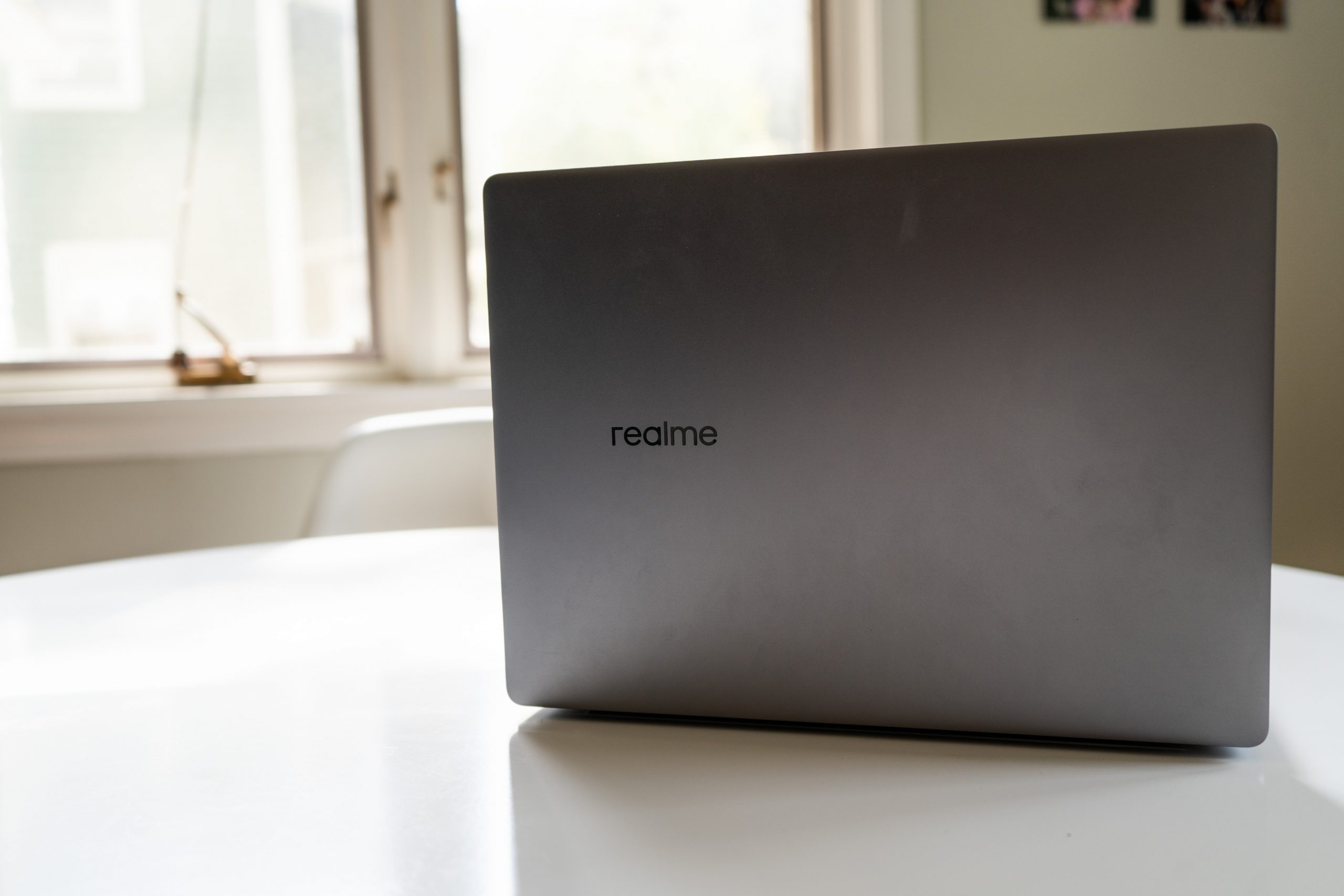 The Realme Book Slim isn’t the most powerful device in its category, but it can still handle a pretty heavy workload. While some markets are limited to the 8GB model, the 16GB of RAM in my review units was more than enough to keep about a dozen apps open during my workdays with multiple instances of Chrome open with 20-30 tabs. The 11th Gen Intel Core i5 was also quite capable for 4K video editing, even managing to deliver export times that were roughly in line with the total length of the video.

Realme was keen on pointing out that the laptop is equipped with 8mm dual heat pipes, ultra-thin dual fans to keep the CPU cool and I have to say the results are pretty impressive. When the fans ramp up while exporting video or during a gaming session, the body of the laptop doesn’t seem to get too hot and the fan noise level is significantly lower than what I’m used to. While the integrated Intel Iris XE graphics aren’t going to satisfy hardcore games, those of us who simply want to have a device that can play the occasional game should be able to manage. For reference, we were able to get 54-72 FPS on low settings in CSGO.

The only real downside is the laptop’s upgradability. While the SSD can be swapped out, the RAM is soldered to the motherboard. My recommendation is to make sure you opt for 16GB of RAM if it’s available in your market, but if you’re not someone who’s into gaming or using creative apps for photo and video editing, you should be able to get by just fine with 8GB of RAM. 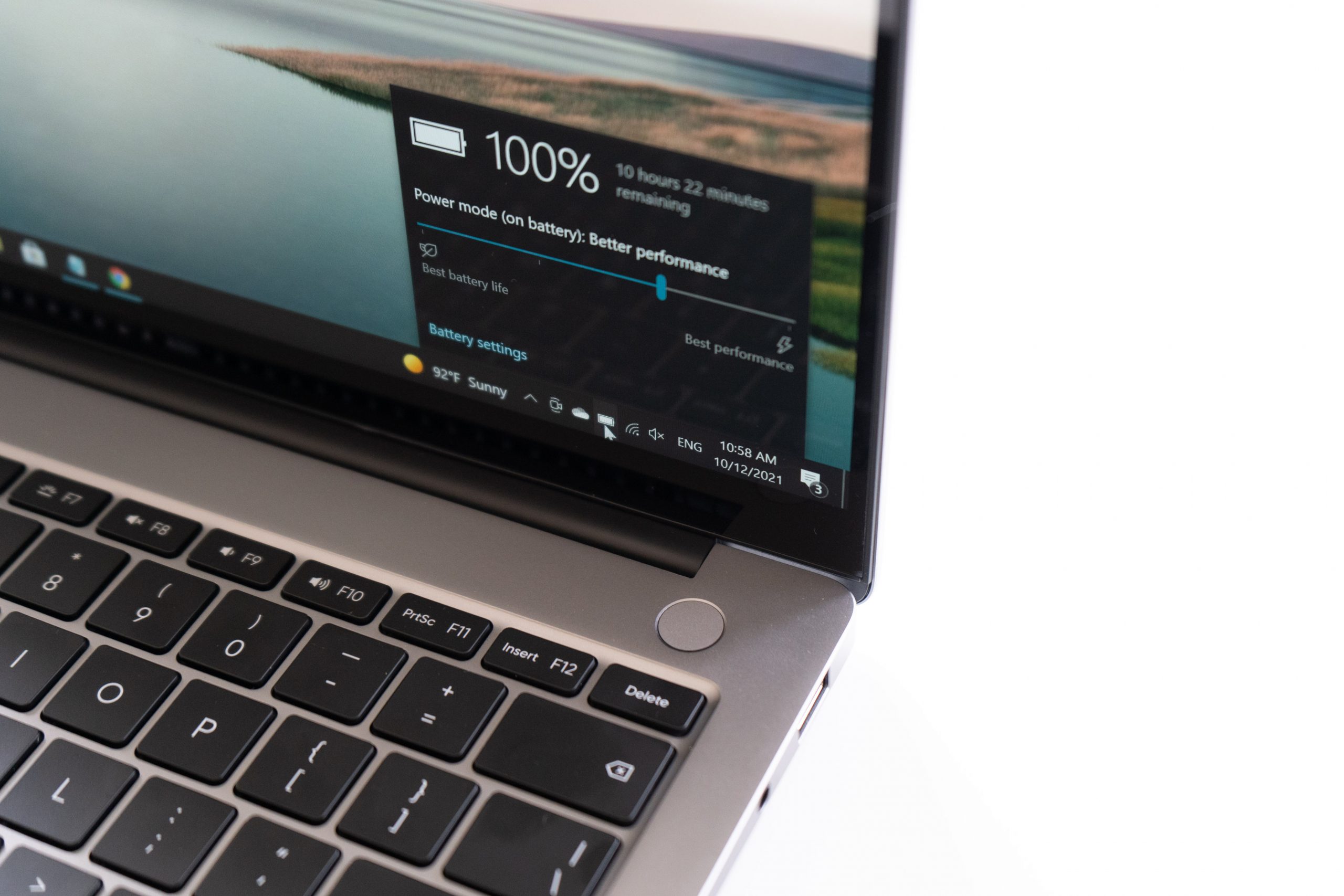 While Realme claims the laptop can get up to 11 hours on a single charge, I averaged 5.5 hours between charges when browsing the web, writing articles like this, and watching the occasional YouTube video. Watching video drops that number down to 3 hours, but if all you’re doing is binge-watching your favorite show, our Netflix streaming test resulted in just over 6 hours of playback on a single charge at 50% brightness.

Out of the box, the Realme Book Slim runs on Windows 10, but if you’re eager to jump onto early builds of Windows 11, you definitely can. Realme didn’t add much to the software experience, save for its PC Connect app that allows you to wirelessly connect Realme smartphones to the laptop. It can mirror the phone’s display, giving you full access to all your smartphone’s apps and features while also allowing drag and drop file support between the laptop and smartphone.

For now, PC Connect is only compatible with the Realme GT Master Edition, but more Realme devices will be supported in the future.

A few other things 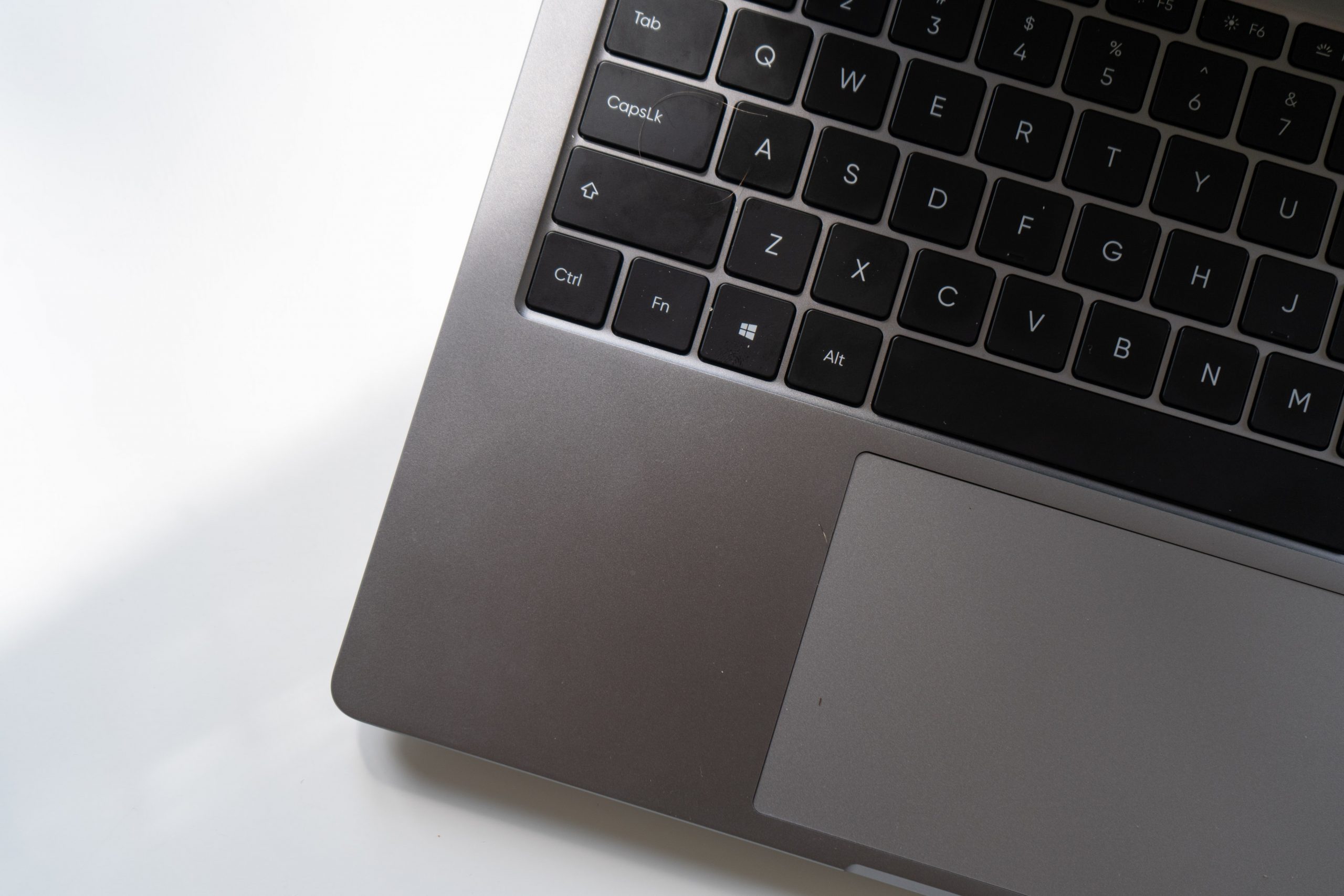 Trackpad: Thanks to the 3:2 aspect ratio of the display, the trackpad is quite large. It supports Windows 10 gestures and was extremely responsive during my two weeks with the laptop. Typically, I switch over to a wireless mouse after a day or two on a new laptop, but I didn’t feel the need to do that unless I was gaming.

Display Hinge: If you’re a fan of opening the lid of your laptop with a single hand, you’ll be quite disappointed with the hinge Realme has used on this laptop. It does an amazing job of keeping the display sturdy while you’re typing away on the keyboard, but that also means you’ll be lifting the entire laptop if you attempt to open the lid without also holding the body down with your other hand.

For being the brand’s first laptop, the Realme Book Slim is pretty impressive. It may fall behind the competition a bit when it comes to direct spec-for-spec comparisons and price, but it still offers a great value if you’re matching it up against some of the bigger players like Lenovo and Dell.

With this being Realme’s first laptop, they’ve delivered a very solid device that they can be proud of. If you like the look and are fine with the battery performance, you’ll definitely be happy if you choose the Realme Book Slim for your next laptop.