While Google begins building the hype train for the Pixel 6 series, there’s another Pixel phone that could be hiding in the brush. Over the course of the year, we’ve heard rumblings of a supposed “Pixel Fold” using Samsung’s excellent foldable display. There have been references to the supposed device early on in the Android 12 beta cycle.

Now, a new leak from Senior Director at Display Supply Chain Consultants, David Naranjo (via GSMArena), suggests that the Pixel Fold will make its debut in Q4 2021. According to Naranjo, the Fold will feature a variable refresh rate, maxing out at 120Hz, courtesy of an LTPO OLED display panel.

With the announcement of iPhone 13 Pro and iPhone 13 Pro Max having a variable refresh rate up to 120Hz marks 20 models that are current and rumored that use LTPO OLED panels from SDC. pic.twitter.com/5wlbsl2HF1

This list of devices also show an unnamed foldable phone from Oppo that will be arriving in the same time frame. This lines up with previous rumors and reports claiming that Oppo was working on something new and different, which could eventually lead to a potential foldable OnePlus phone.

Going back to the Pixel Fold, it would make sense for Google to want this device to stand all on its own. So we likely won’t see or hear about it at least until the Pixel 6 and Pixel 6 Pro make their official debut. Perhaps there’s a chance that Google could give us a teaser at whatever likely streamed event it plans to hold.

Unfortunately, with the exception of some vague rumors and renders, we don’t really know exactly what the Pixel Fold could look like. If Google and Samsung are continuing their newfound partnership seriously, perhaps this ends up essentially being the Galaxy Z Fold 2 or 3 with Pixel cameras and stock Android. That’s rather unlikely, as Google has already shown that it wants to push the envelope as it tries to build up its stock in the smartphone market.

All eyes are now on Google, as we barrel towards the release of the Pixel 6. Will there be a “one more thing” or is Google just going to hold a separate event altogether? Who knows, maybe Google will just kill the project as it appears to not care all that much about foldable phones with tablet-sized displays. 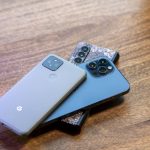 Google could be working on two foldable phones

Google could launch the Pixel Fold early next year