Although the world isn’t quite back to the same place it was two years ago, it’s slowly getting there. We’re planning trips and events seem to be going forward, such as CES 2022, at least for the time being. With this in mind, it’s now time for me to revisit what goes into my travel bag.

Just as important as bringing the right devices, is bringing the right accessories. One such headache has always been the need to carry a bunch of different chargers with me. From portable chargers to wall chargers, and everything in between, trying to find the right combination has been practically impossible.

But that’s now changed quite a bit thanks to the new Chargeasap Flash Pro Plus portable charger. This is being touted as the “world’s fastest power bank”, and has more than a few features that help it stand out from the crowd. 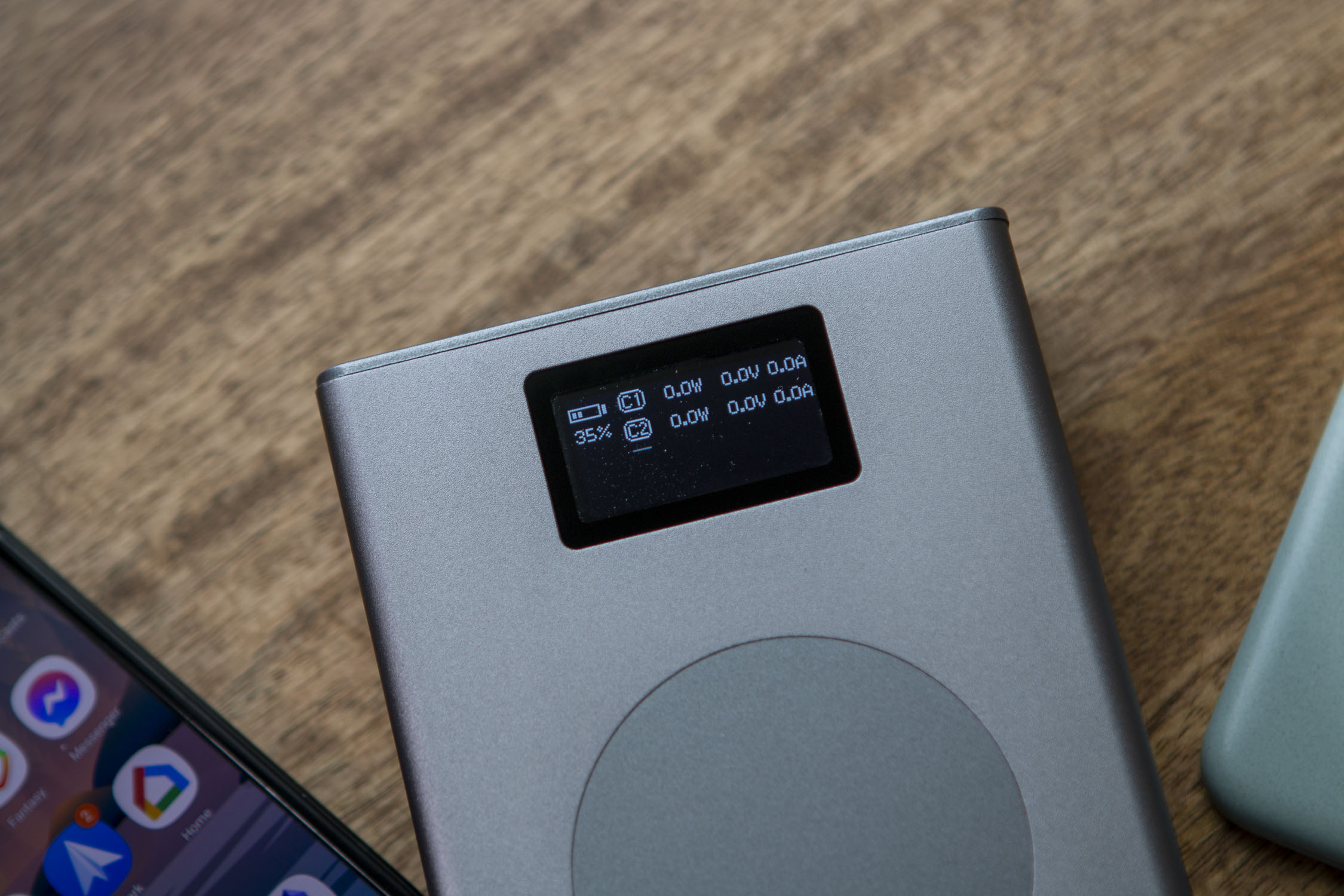 When you first take the Flash Pro Plus out of the box, you’ll instantly notice the weight and bulkiness. It’s definitely a downside, especially if you need to travel light, but there’s a good reason for it. The Flash Pro Plus features an enormous 25,000mAh capacity, courtesy of the four Li-Po Graphene Composite battery cells packed inside.

Looking at what the Flash Pro Plus can handle though, and you might just simply be blown away. With this portable battery bank, you can charge up to six total devices at the same time. On the top, there are three USB-C ports, along with a USB-A port. And on the front, there’s a dedicated area for those Apple Watch owners out there, along with a wireless charging pad for everyone. 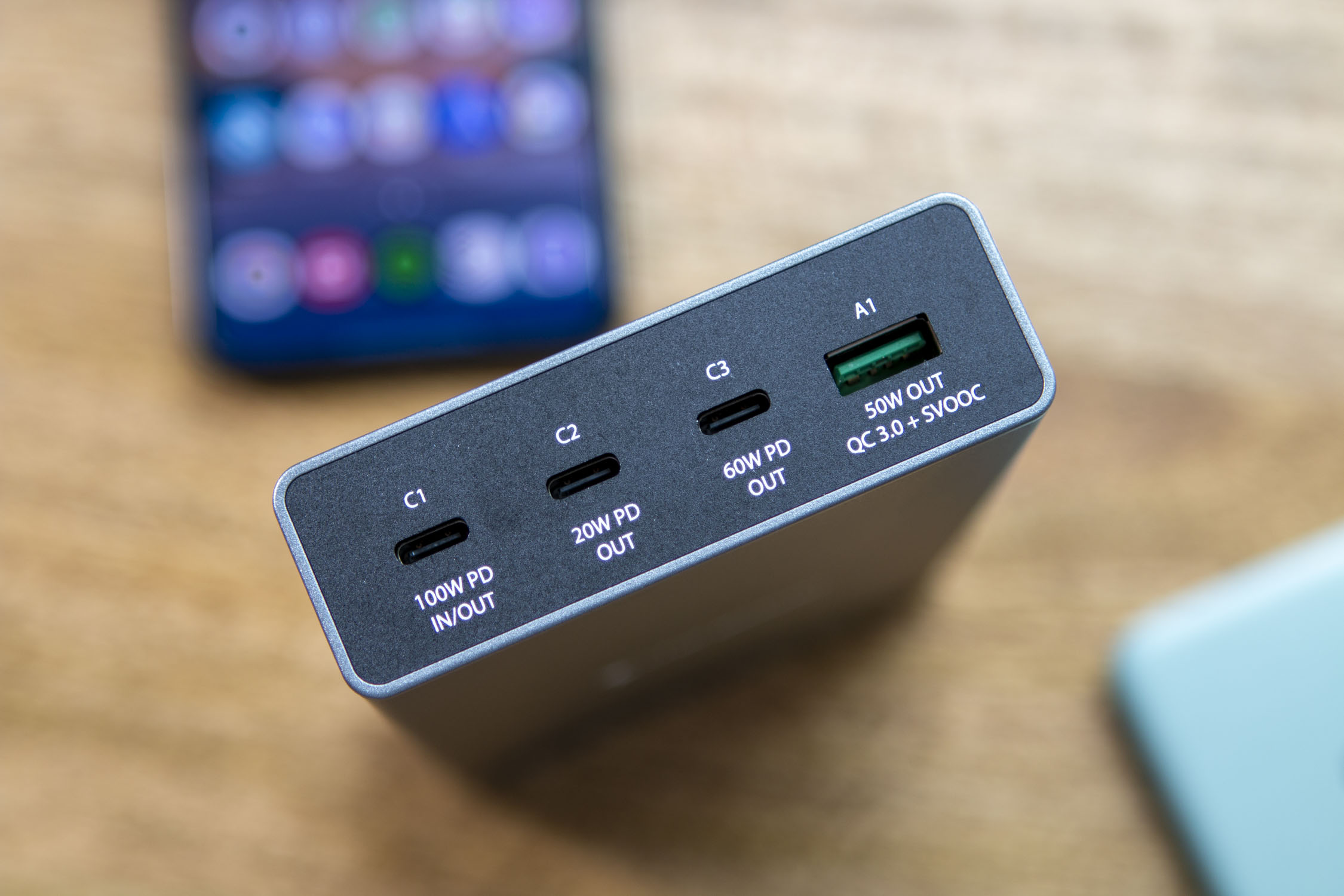 Here’s a breakdown of the features of those USB ports:

To have quick and easy access to all of this power in a single device, is absolutely incredible. This means you can charge your laptop, smartphone, smartwatch, and any other accessories or devices all from a single portable power bank. But arguably, this isn’t even the best part of the Flash Pro Plus. 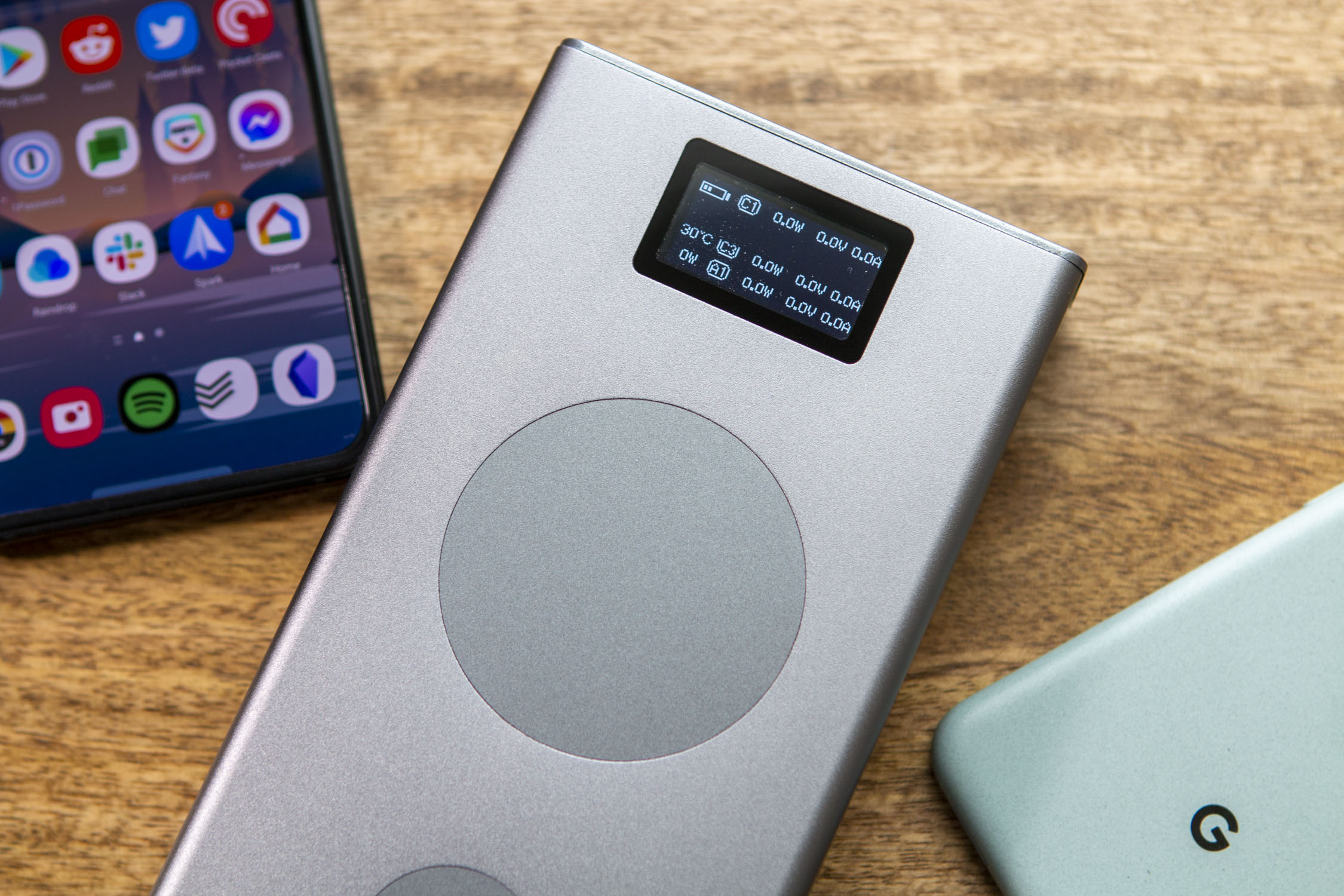 On the front of the charger, you’ll notice a little LED display cutout. Press the power button on the side, or plug something into it, and the display comes to life. But instead of just giving you an over-sized view of how much (or little) juice you have left, the Flash Pro Plus provides so much more.

From the display, you can view the speeds at which your devices are actually charging along with how hot the power bank is. And if you’re just charging the Flash Pro Plus itself, you can see just how much juice is being used to get your power bank back up to 100%. 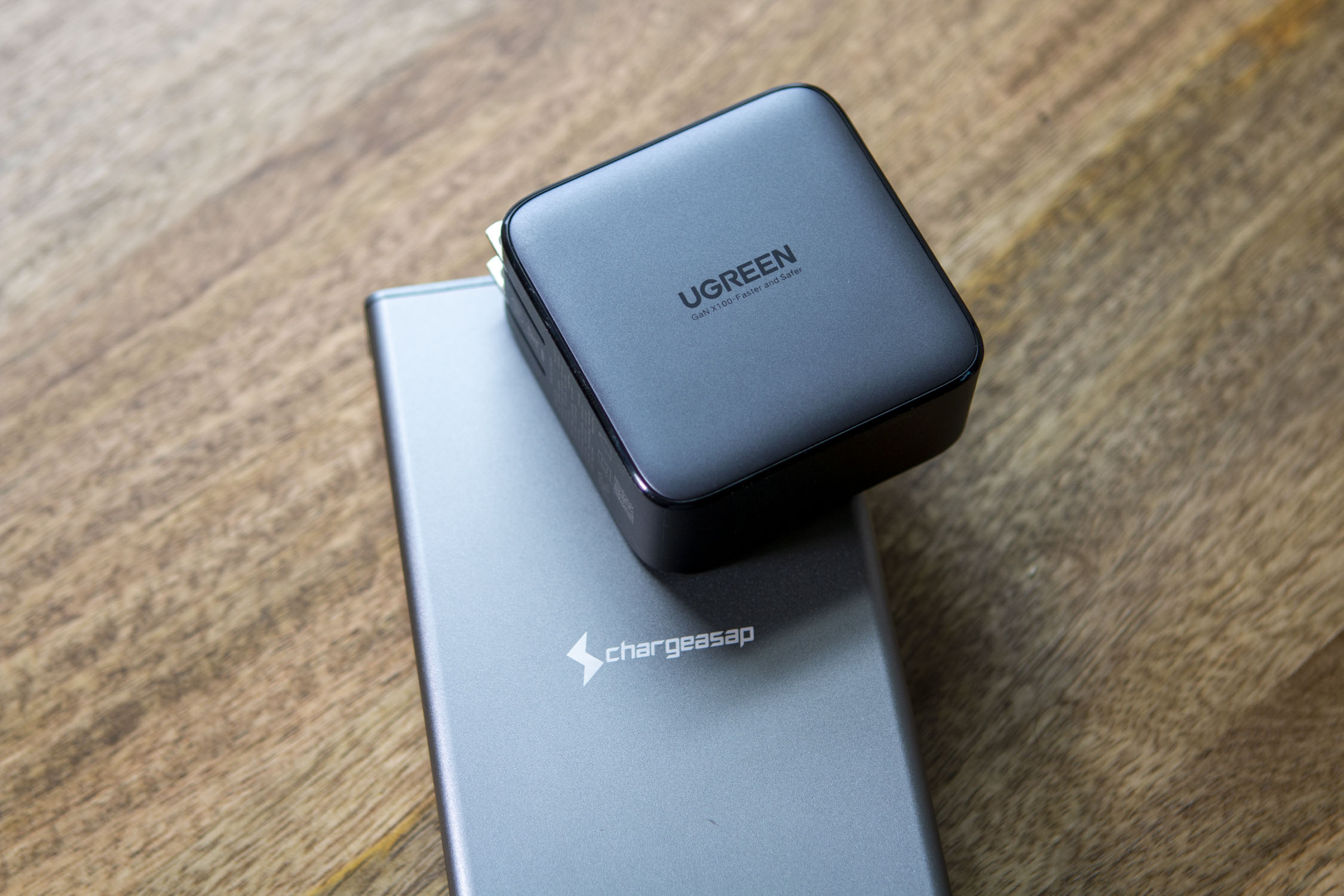 Speaking of which, you’ll be able to use the 100W PD USB-C port with a 100W wall charger like the UGREEN 100W GaN Fast Charger and get back up to 100% in no time. Chargeasap claims you can go from 0-80% in about 40 minutes, before reaching 100% in about an hour and 10 minutes. This lines up quite nicely in our testing, but again, you’ll need at least a 100W wall charger to make it happen.

Having this little LED display is extremely useful, and removes the need to pick up a multimeter if you wanted to make sure a phone or other device is charging at the correct rate. Chargeasap has also gone to great lengths to include safety measure that prevent your devices and the Flash Pro Plus from getting too hot, or over-charging. That’s partly why you can see the temperature right from the LED display.

The power bank to rule them all 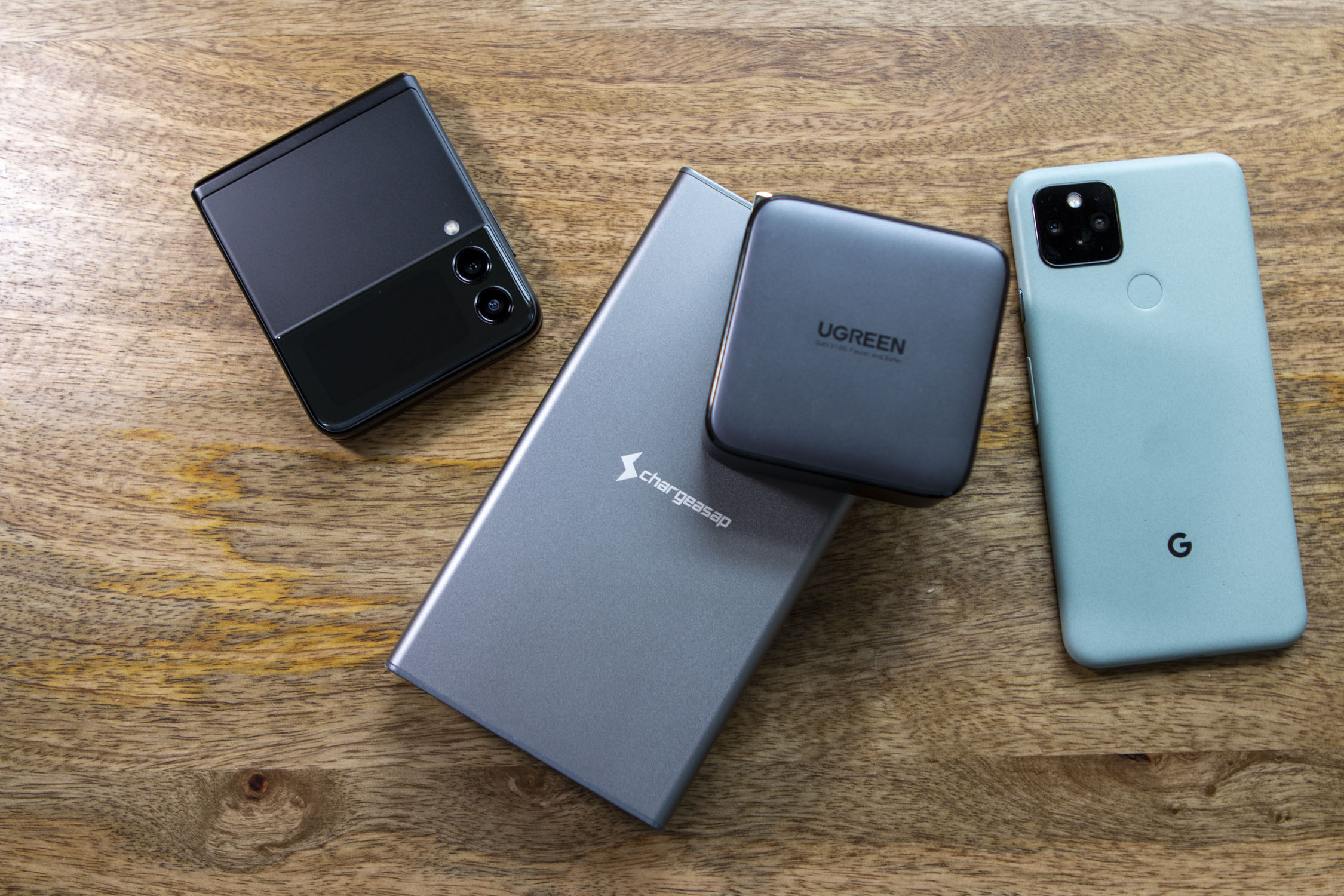 Chargeasap actually has two different models of this power bank. There’s the Flash Pro Plus that includes the Apple Watch charging area, but there’s also just the standard Flash Pro for those Android users out there. You’ll still enjoy the wireless charging pad on the top, along with the same 25,000mAh capacity and charging ports. But you just won’t have the extra charger on the top.

How to order the Chargeasap Flash Pro 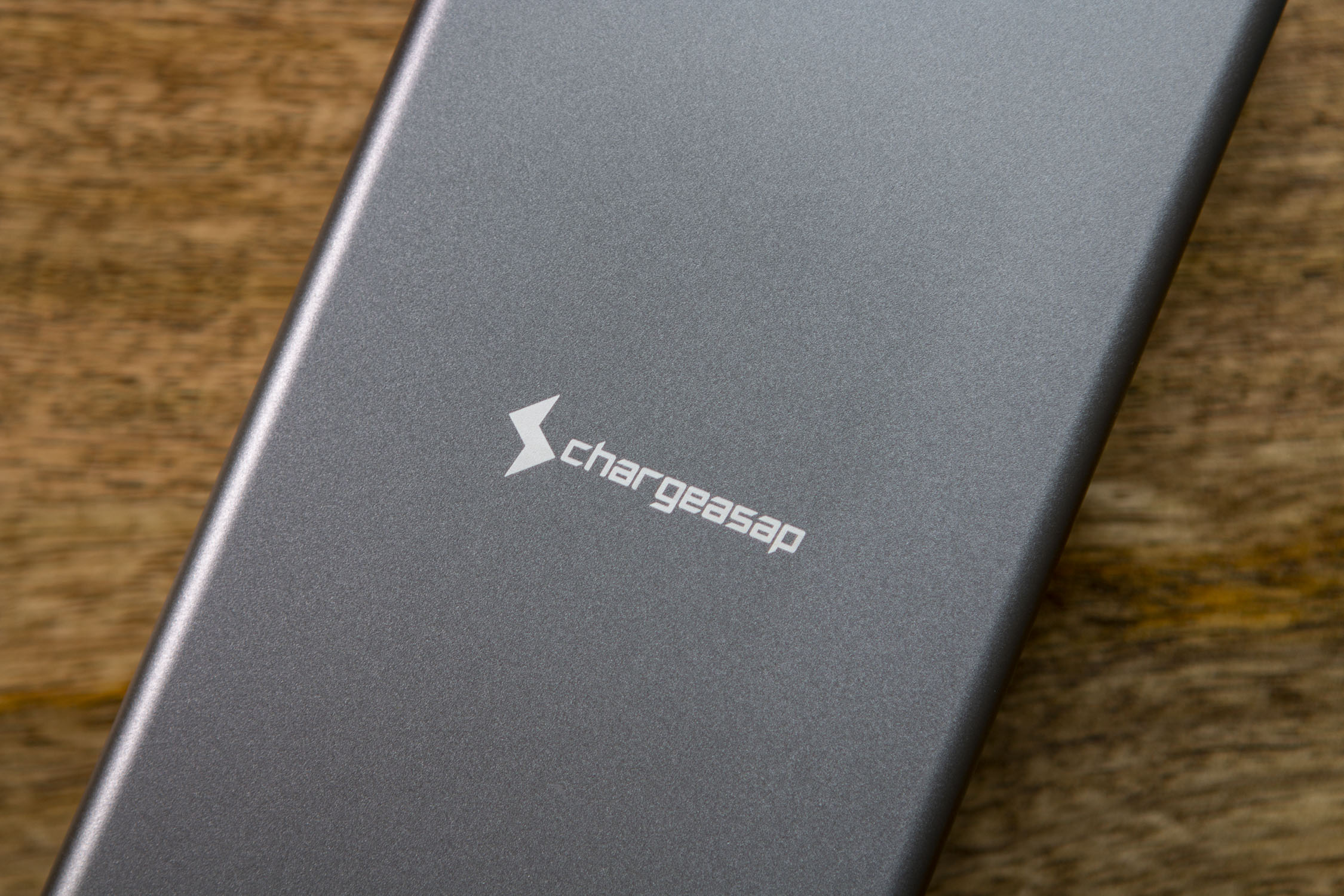 If you’re interested in grabbing one of these for yourself, you can join the Indiegogo campaign. The campaign ends in three days, but Chargeasap has absolutely destroyed its goal by raising more than $427,000. Even with the campaign coming to a close soon, you can still jump in on some of the Early Bird deals. Here’s a breakdown of what’s currently still available:

You might be wondering where the Flash Pro Plus resides on the Indiegogo Campaign. But that’s because Chargeasap will send out a “Backerkit” survey after the campaign has concluded. From there, you will be able to upgrade from the normal Flash Pro to the Plus version.

As we stated before, the Indiegogo campaign ends in just three days, so if you want a power bank to rule them all, hit the button below and grab yours before it’s too late. 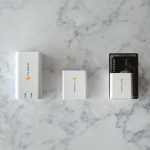