In just a few days, Samsung will be unveiling the Galaxy Z Fold 3, meaning that now’s the time to revisit the Galaxy Z Fold 2 and see how the foldable phone held up over the past year. Before proceeding, it’s important to note that, unlike Mr. Mobile, I did not use the Fold 2 as my daily driver every day. But I did use it on a daily basis around the house for different things like playing games, writing a few articles, and just browsing the web. Ya know, like a couch tablet.

One thing that I did do was throw my SIM card back into it a few weeks ago and have been using it every day since then. This has included trips to Kings Dominion, heading to a few baseball games, and everything else that my Summer has consisted of (not really all that much). Here are a few thoughts that I have as we gear up to see what Samsung’s third foldable iteration has to offer. 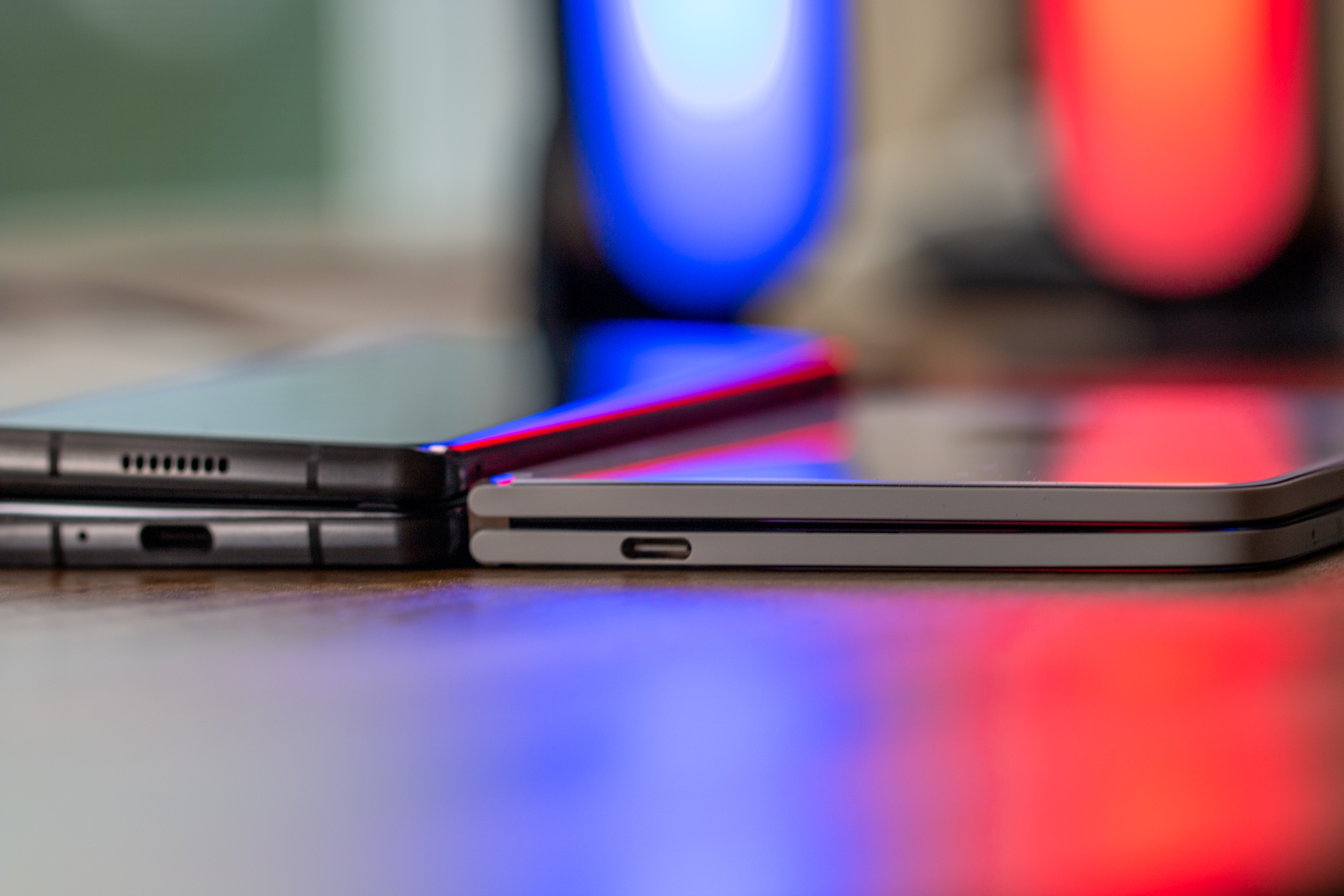 Over the past year, I’ve used quite a few different phones, but none of them even come close to tipping the scales like the Z Fold 2. When using the phone closed, it feels like a literal brick in the hand, and the hand fatigue that comes with it is really not fun. The fatigue aspect goes away after a few days as my hands just needed to adjust to the chonky boi coming from slim and sleek phones like the OnePlus 9 Pro.

I still feel the same about the weight distribution when the phone is unfolded, though. It’s much more manageable, even when using with one hand with the screen open, compared to when it’s closed. And I found myself doing this much more frequently, as I subconsciously would only use the Cover Display to browse Twitter, check to see what notifications just came through, or to turn off my smart light.

Where is third-party launcher support 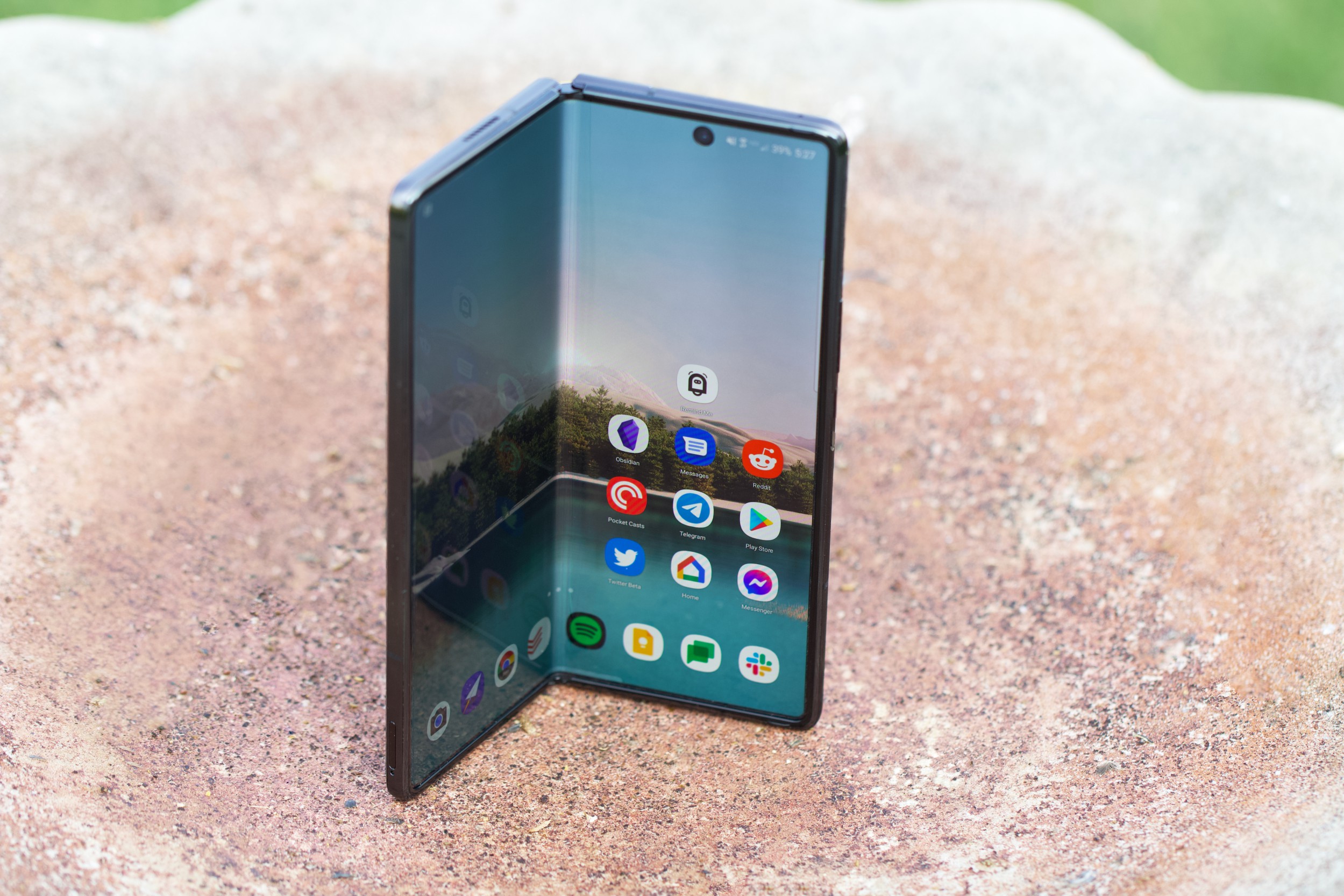 This has been an underlying concern from the beginning, but now that it’s been a year, I want third-party launchers. Yes, One UI has come a long way and if you use something like Theme Park (from Good Lock) then you get even more control over how the phone looks. But let’s be real. It’s not the same as firing up Nova Launcher or Lawnchair. I’ve tried the different Tasker and Bixby Routines workarounds, but they are finicky at best, and end up with my phone reloading a launcher out of nowhere.

I want the ability to use custom icon packs or throw a KWGT widget on my home screen and not have the scaling get all out of whack. And I DON’T want to have the home screen’s matched up on the main screen and cover display. I’m not a developer, by any means, but I really hope to see Google’s foldable development improvements in Android 12 make things easier for developers. 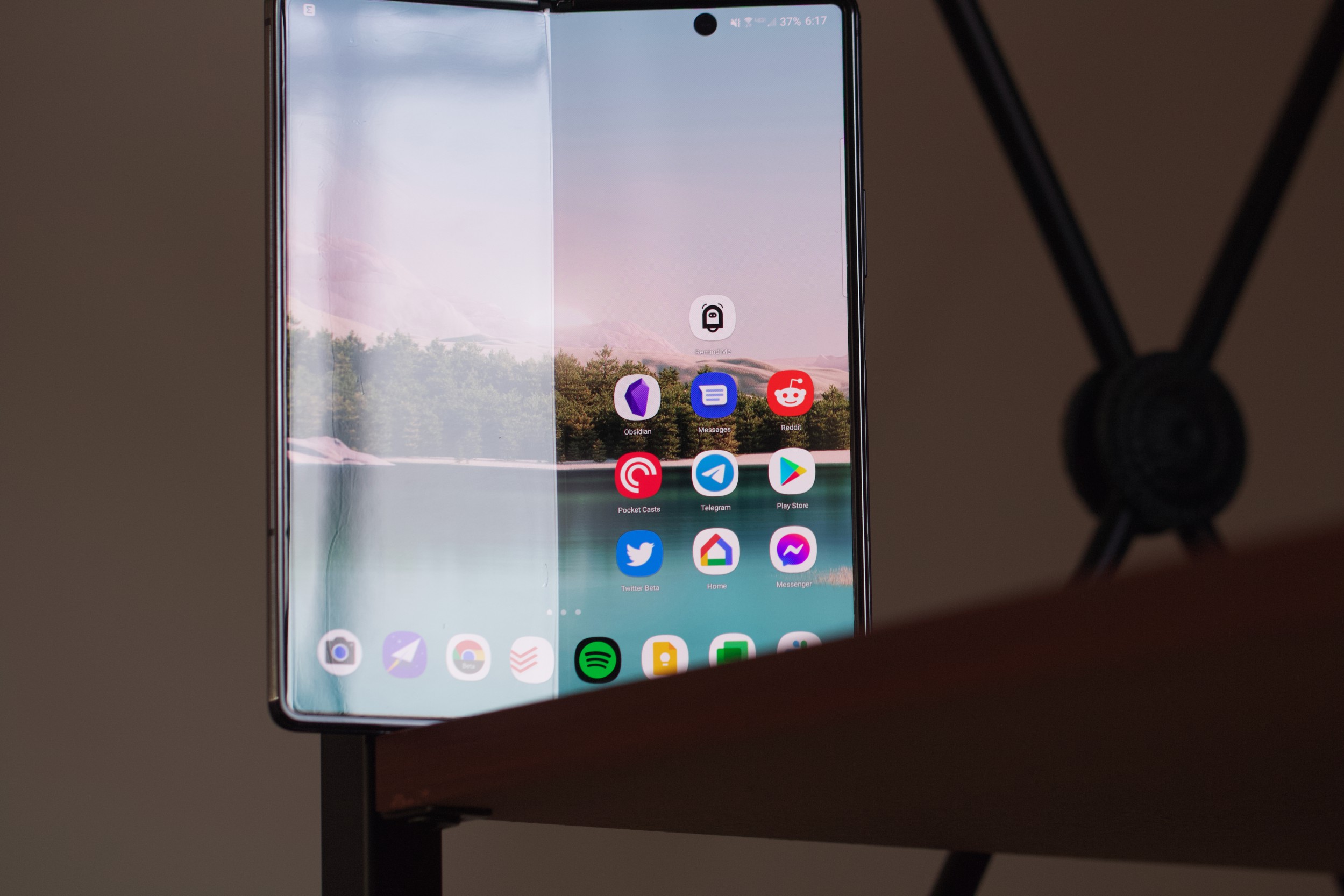 When I wrote my original review for the Galaxy Z Fold 2, I revealed that there were complications with the inner display as random bubbles appeared under the stock screen protector. Thankfully, those were the only problems that I’ve experienced since owning the phone. After the stressful process of removing the old screen protector and installing a new one from Amazon, everything’s been hunky-dory.

It’s still a fingerprint magnet, but that’s fine, and I still do yearn for S Pen support. But that’s likely to be coming to the Z Fold 3. I also seem to have been one of the lucky ones, as there has not been a single crack or anything of the kind to appear on my Fold 2. It just goes to show that even someone like me who doesn’t “baby” their phones can use and rely on a foldable phone.

Should you buy the Z Fold 2? 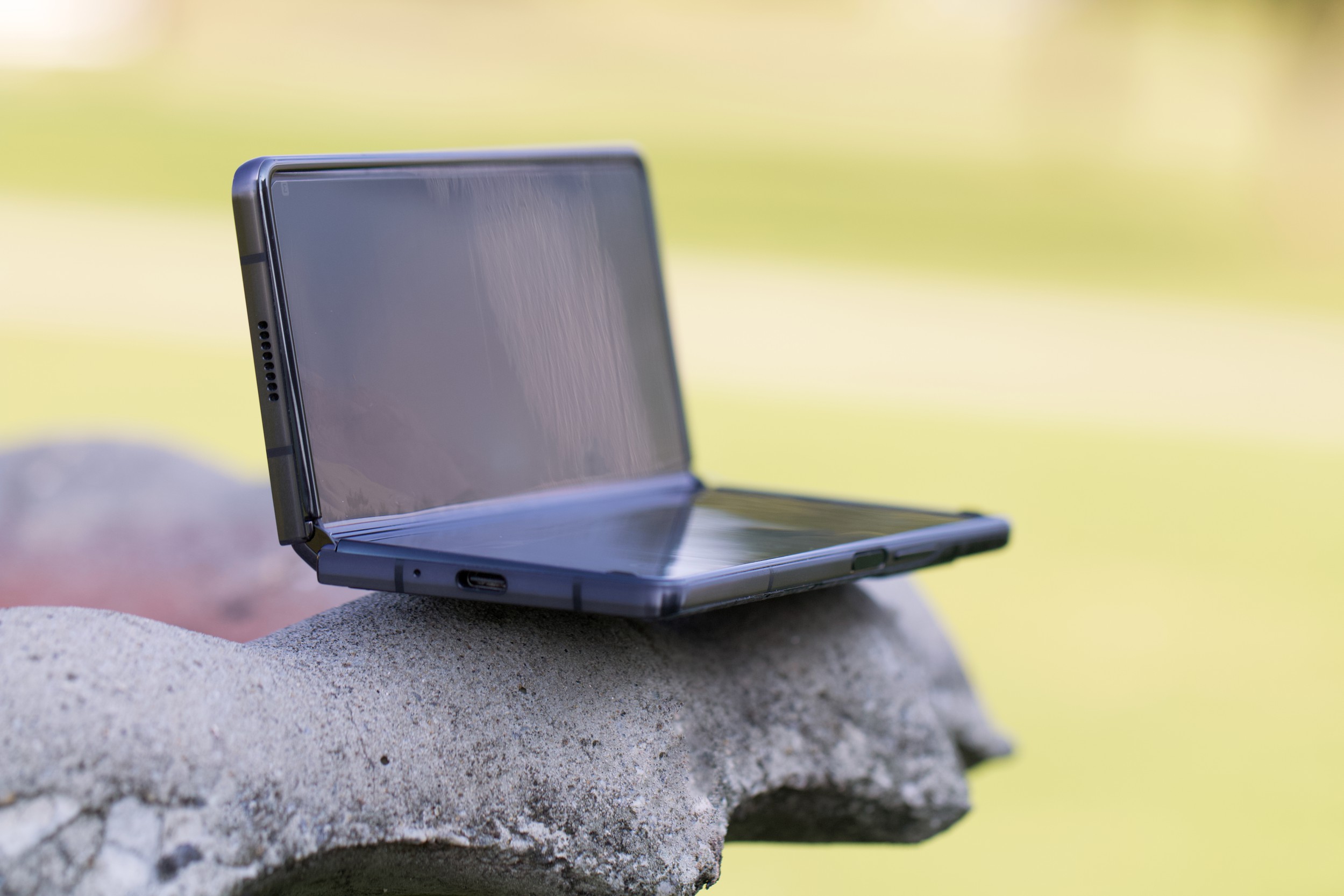 Now is a really tempting time to be considering the Galaxy Z Fold 2. If you look at Swappa, you can get one for about half the retail cost, coming in around $925. Heading over to Amazon, the Z Fold 2 is going for $1,200 if you want to get one through the Amazon Renewed Store. Some may not find that super enticing, but going this route has its benefits, as you have a 90-day warranty to get a refund or replacement.

With the Galaxy Z Fold 3 right around the corner (literally), if you’re considering the Z Fold 2, I would recommend waiting until after this week’s Unpacked event. We don’t know what Samsung will have in store, and we still don’t know what final pricing is going to look like in all regions. But if you know that you don’t want to spend the $1,800 to $2,000 on a phone, then I would definitely recommend picking up the Fold 2. Just know what you’re getting into with the heft, so-so cameras and potentially frustrating app support.

Will I be upgrading to the Galaxy Z Fold 3? 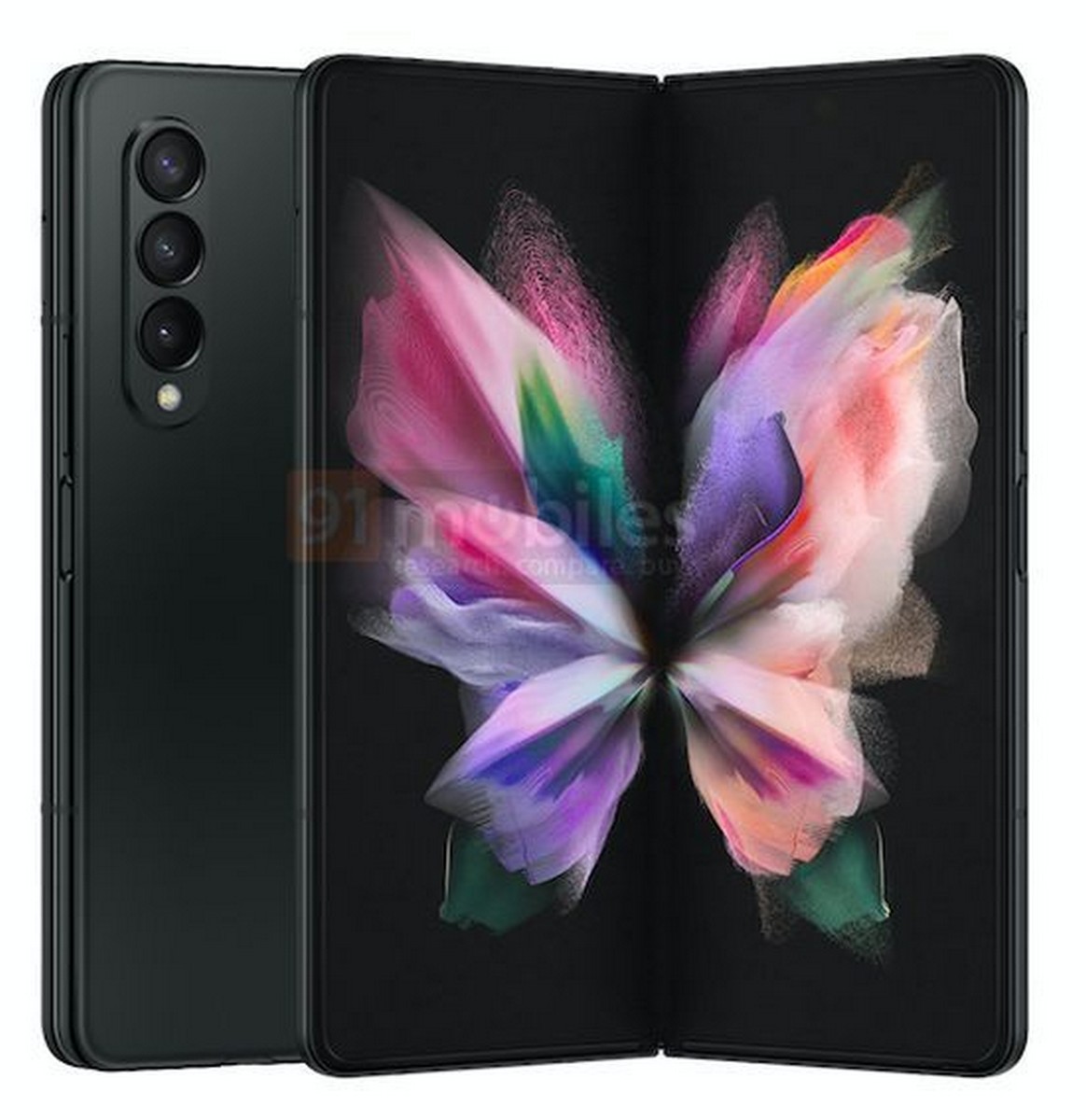 This is the million-dollar question, right? With the leaks pointing to the introduction of S Pen support with the Fold 3, along with updated specs and an official IP rating, it’s going to be extremely tough to say no to an upgrade. There’s literally nothing wrong with my Fold 2, and it will likely still serve a purpose after the Z Fold 3 is announced, but I’m here for the S Pen support.

Since we’re unlikely to see any type of magnetic attachment, that means that Samsung will be offering a few cases to use with it. And even though the next iteration is likely to be a bit lighter, using a case just to make sure my S Pen doesn’t get lost will be tough. But by adding S Pen support, proves that Samsung has improved the display quality even further. I won’t have to worry about my fingernails getting too long and accidentally leaving any type of indentation on the screen.

Plus, adding an S Pen will further drive home the point that the Galaxy Fold series of phones are the perfect couch devices. Big enough to handle everything you would want to do without reaching for a Chromebook or laptop, but small enough to avoid any being too cumbersome.