The Panasonic Toughbook 55 is a bit of a curveball in the laptop world. It’s a super rugged, modular device developed for businesses, emergency crew, police, military, and those who need more out of a laptop than simply being lightweight or a tool for browsing Facebook. And even though it’s not designed for the average person, it’s just so cool. And best of all, it proves modularity can be done right and works in the modern age. Yes, with so many failed modular products in the mobile space like the Essential phone and Moto X series, and some that never even took off like Project Ara, Panasonic makes it work surprisingly well. 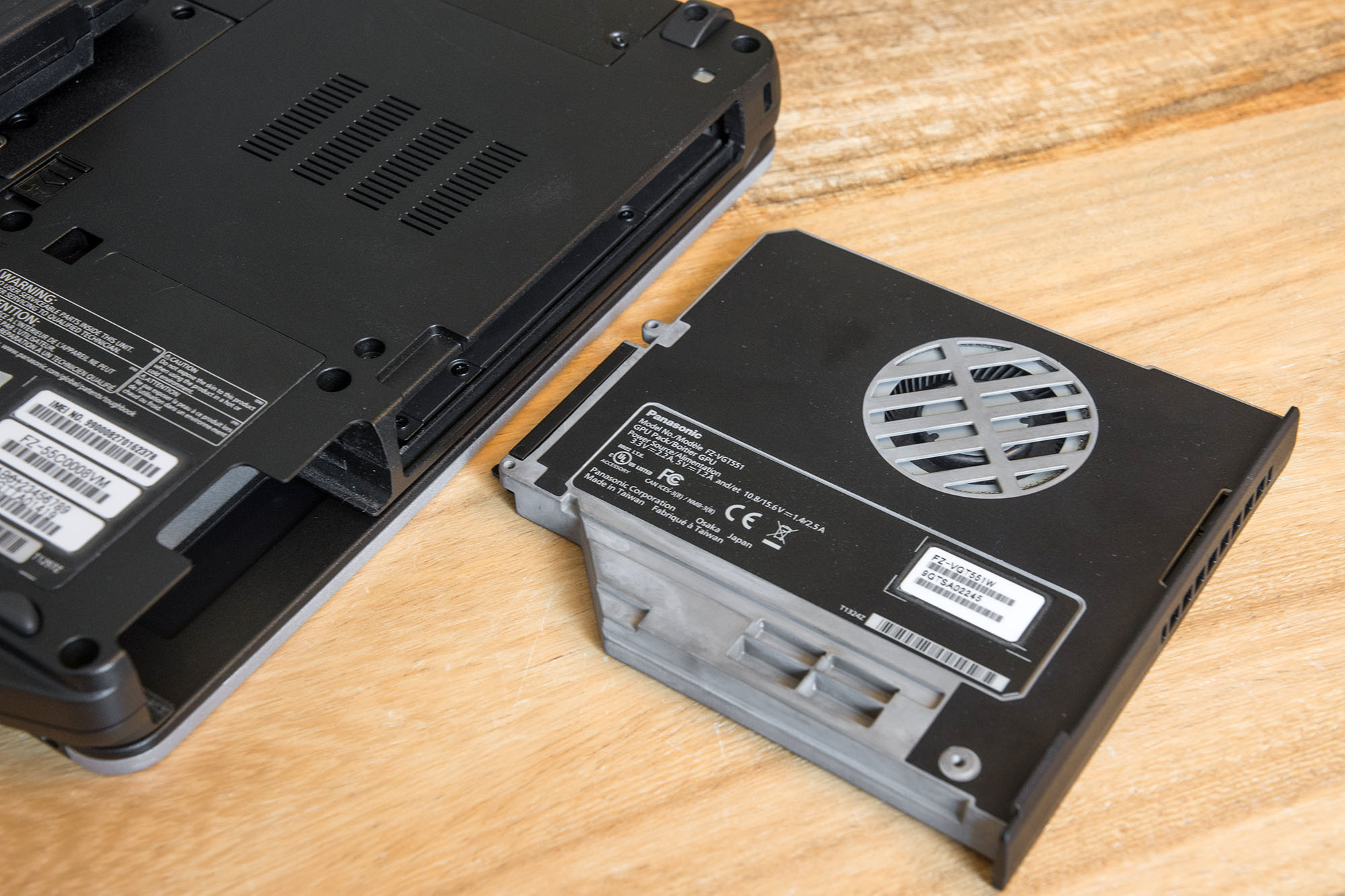 The upgraded IPS display is a real treat. it’s only 1080p, so it’s not very high resolution (or particularly good looking), but it does have a matte anti-reflective coating and both touch and pen support. The touch support is super sensitive and smooth, better than many laptops with glass displays. The pen stores away in the side and, while being plastic and button-less, is surprisingly sensitive and useful. It also ramps up to a maximum of 1000 nits, which is crazy bright and guarantees visibility anywhere you go which adjusts automatically thanks to its auto-brightness sensor. Unfortunately, my unit has substantial backlight bleed along the bottom edge which detracts from the whole experience. 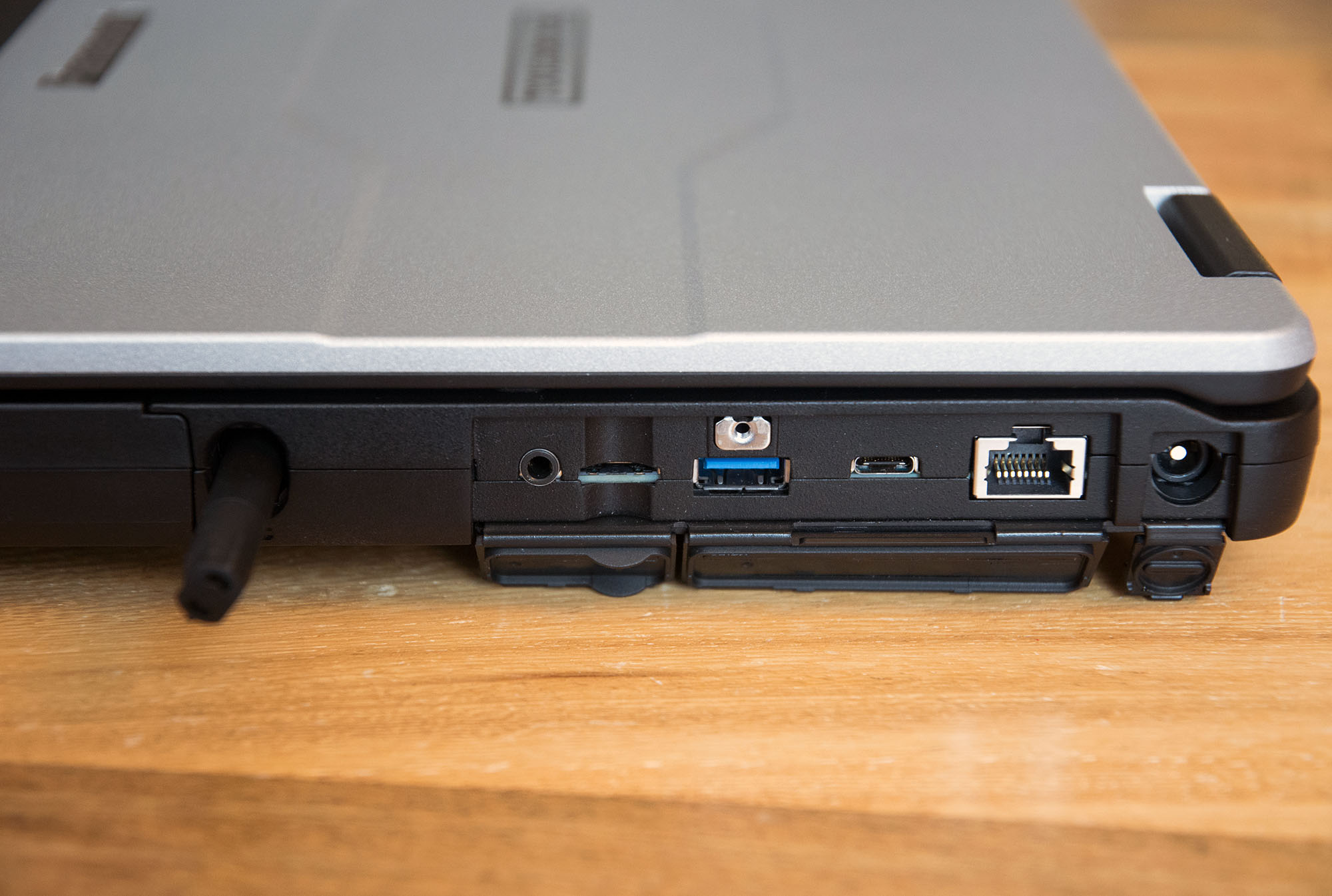 On a barebones system you’ll find two USB-A 3.1 Gen 1 ports, a USB-C 3.1 Gen 1 port, an HDMI 2.0 port, a gigabit Ethernet port, a microSD slot, a headphone jack, and a barrel charging port. Of course all this is configurable, and with various modules (called xPAKs), you can add a multitude of ports like a second gigabit Ethernet, VGA, and even serial. There’s also no optical drive, but a big slot for one. You can throw in a DVD drive, Blu Ray drive, or if you don’t want either, a Radeon Pro WX 4150 GPU. This slot is tool-less with a little release lever, though the GPU is not hot-swappable.

One of the two side expansion slots houses a battery, but the other can be used for a variety of hot-swappable modular upgrades. You can toss in another battery, a security card reader, a fingerprint reader, more storage with RAID1 support, and more. It’s pretty amazing how many different xPAKs Panasonic offers to make the perfect configuration and it can be changed with the pull of a switch to release the module. 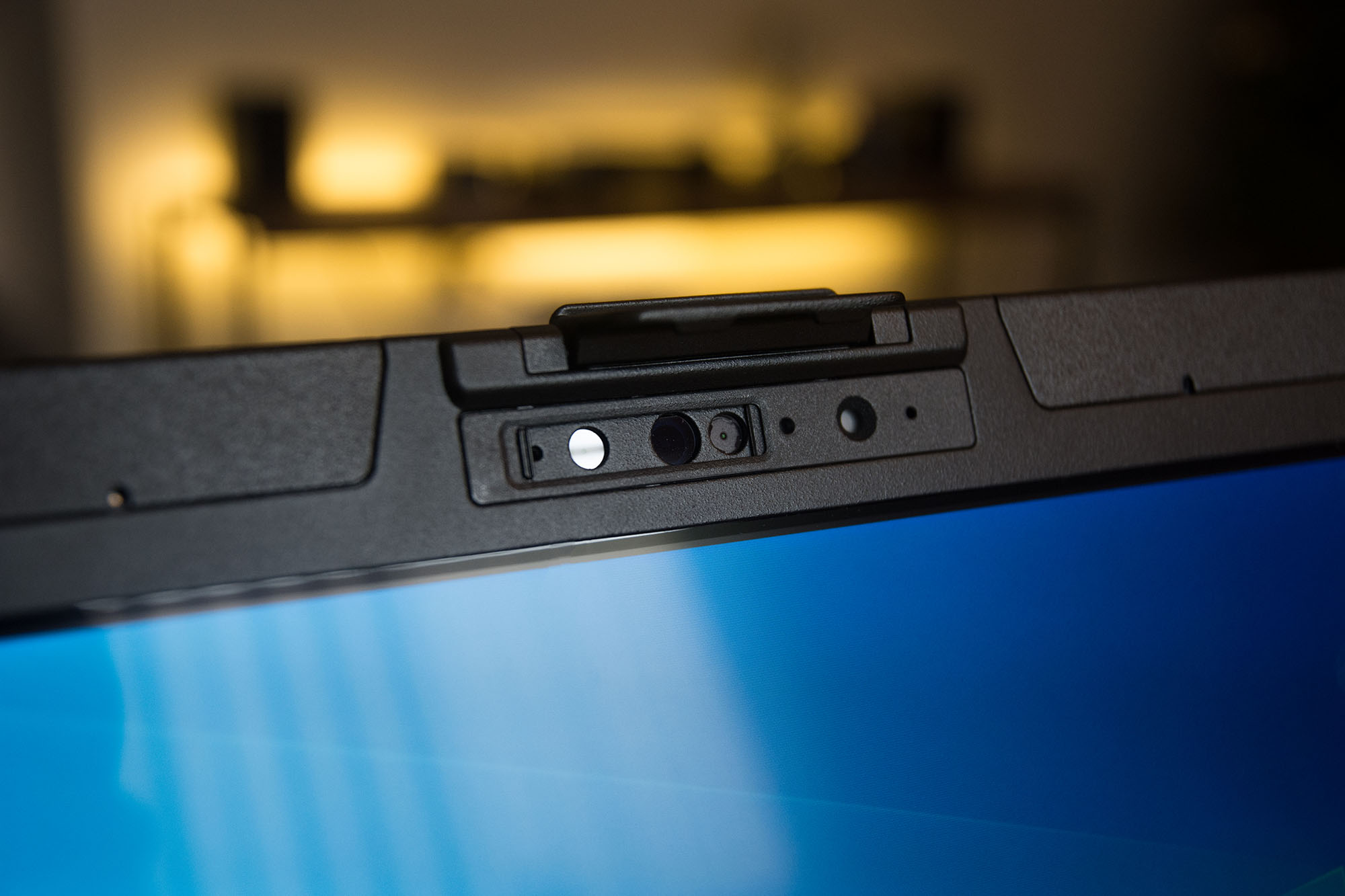 The speakers are capable of producing 92 decibels, which is extremely loud for a laptop. They don’t sound great; they’re extremely tinny and high pitched. There’s no bass at all. This isn’t anything too new to most laptops but they’re not going to replace a good speaker or headphones. However they’re fantastic for work when they need to be heard. This is paired with four microphones for the best possible voice to text recognition. And to add to the already crazy amount of features, it comes with a full Windows Hello IR camera setup! This makes logging in quick and seamless, though it can be a bit inconsistent to start on cold boot. If you don’t want the camera staring at you, slide the integrated cover over it. 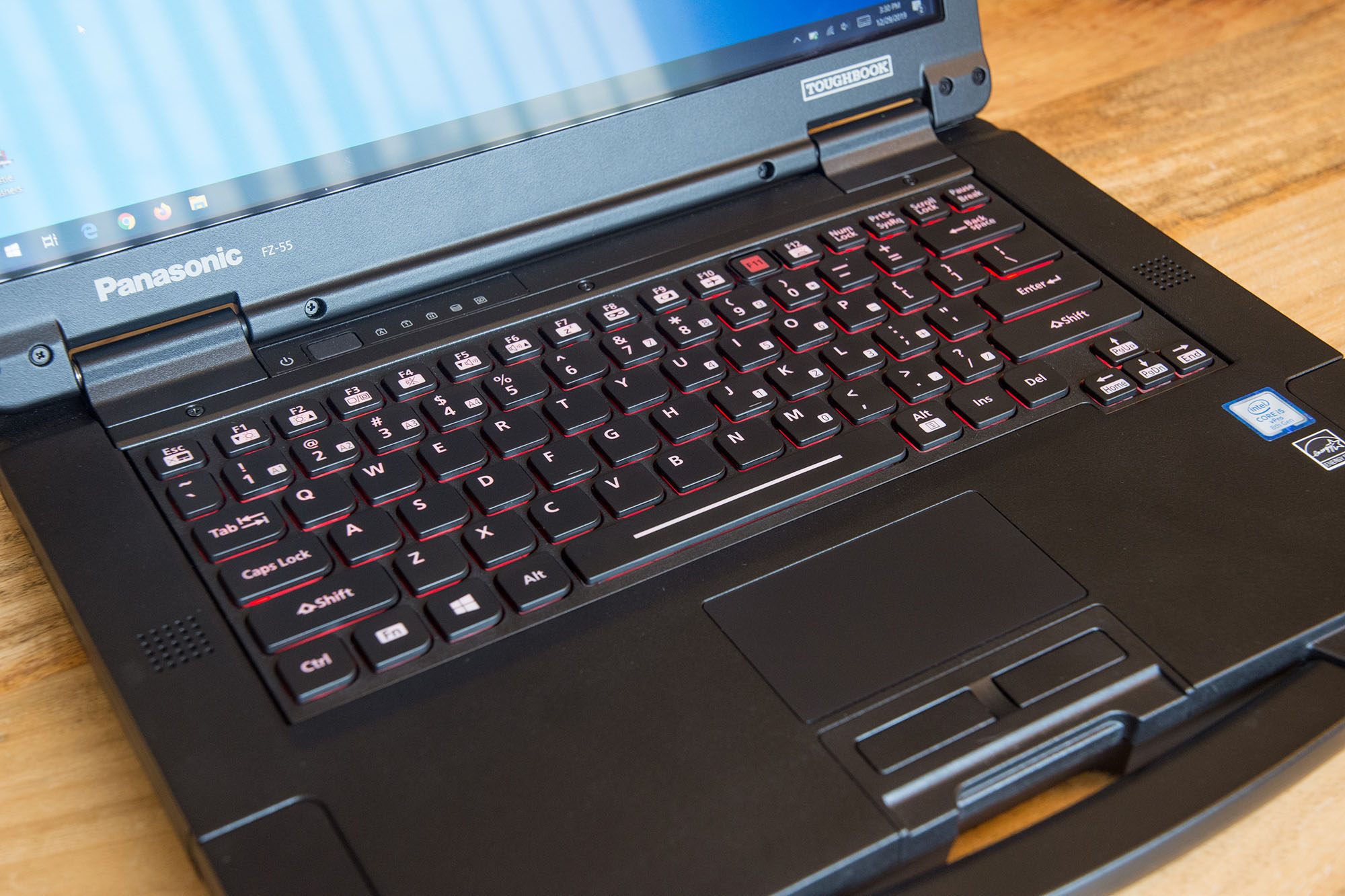 As someone who does a lot of writing, the keyboard and trackpad are both really important aspects. And you wouldn’t expect a rugged work laptop to excel here. In fact, many older rugged laptops had the squishiest keyboards and tiniest, cheapest trackpads possible because it didn’t really matter.

The Toughbook 55 doesn’t revolutionize rugged laptops in the keyboard department, but they’ve done a good job creating a rugged keyboard with a pleasant feel. The keys are large and well-spaced and have a nice long travel. This travel is a bit on the stiff and squishy side, with minimal tactile click, but it’s surprisingly nice to use. This review is entirely written on the laptop and it was a breeze. You quickly adjust to the need to tap the keys a bit harder and it becomes second nature.

There are a few quirks to the keyboard. One is that there is no modern function row with the F keys being accessed by holding Fn. It’s the old style where adjusting brightness and volume are done by holding Fn and hitting the F keys. This makes sense since many businesses still use rudimentary GUIs that require F button presses.

There are some configurations, like Fn lock and a red button surrounded by a plastic ridge so you can’t accidentally press it. This is an emergency button that can be enabled by a company, like a police department, but does nothing by default. The delete key is also to the left of the arrow keys which is odd, but the arrow keys themselves are large and easy to use.

A neat and unexpected addition is a keyboard backlight, with full RGB support. I’m not sure why Panasonic decided to add this, but I love it. You obviously don’t get any effects but you select whatever color you want. The keyboard is also removable with a few screws so you can swap it if it gets damaged, great for rugged use out in the field.

The trackpad is quite small for such a large laptop, far smaller than most. However, it is a Windows precision touchpad with full native support for Windows gestures. These can be customized to perfection, and the trackpad is super responsive and accurate. In fact, besides the size, it’s a dream to use. Multi-touch gestures are a breeze and the feel is nice. Unfortunately, the trackpad doesn’t click down and you have to use the two buttons below it. They feel old school but they’re surprisingly useful. 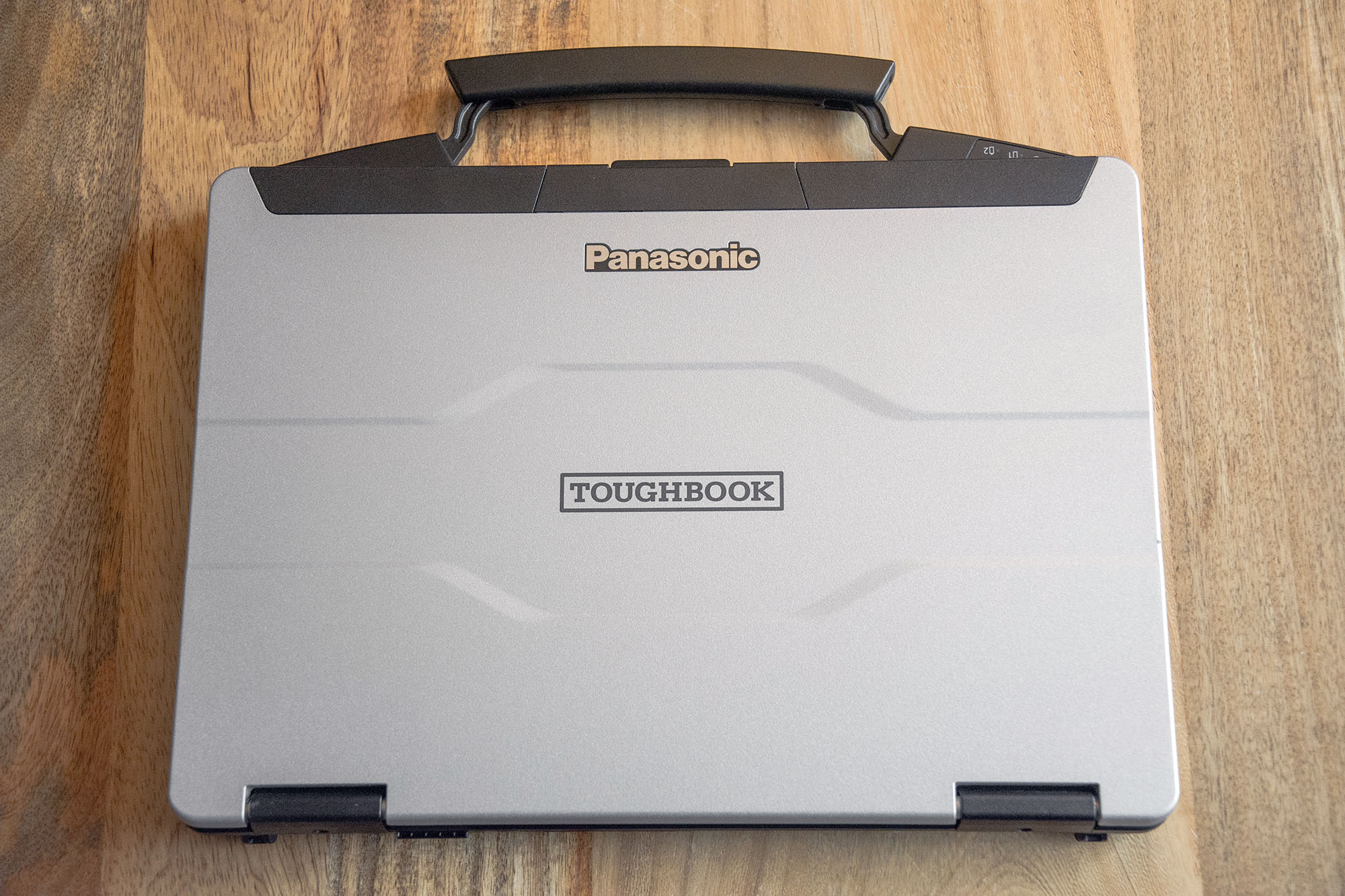 The Panasonic Toughbook 55 is made to survive lots of use and abuse, and as such, it is built like a tank. With a chassis made from magnesium alloy, the company rates this beast for a three-foot drop. You don’t want to try that with an ultrabook.

The display hinge is smooth and solid, staying in position even while being moved around. There’s also a latch for the display that you need to push before opening, keeping it closed when carrying. There’s also an extendable carry handle on the front that feels sturdy. It wiggles a bit when retracted but never causes problems.

When it comes to chassis flex, there literally is none. Push as hard as you want on the keyboard and it won’t bend. The screen is also super sturdy and won’t flex. Like I said, a total tank.

Running on the laptop you’ll find a completely clean version of Windows 10 Pro. Unlike most laptops that run the (extremely similar) Windows 10 Home, the Pro version nets you some extra security features as well as Remote Desktop. Most people won’t need it but it’s important in the business world.

There are a few apps that come pre-installed that let you configure some of the Toughbook’s features. The main config software allows you to change the touchscreen behavior (you can turn off finger touch and leave pen input on or turn both off), enable always-on charging from the USB ports, and modify Fn key behavior. There are also apps for setting up the keyboard backlight, the day/night modes, and more. And thankfully there’s a full-featured manual too, so you can figure out how to use certain features without needing to call support or find a paper manual.

Otherwise it’s a very light, clean install of Windows with no bloatware or nasty manufacturer apps you might find on more mainstream laptops. 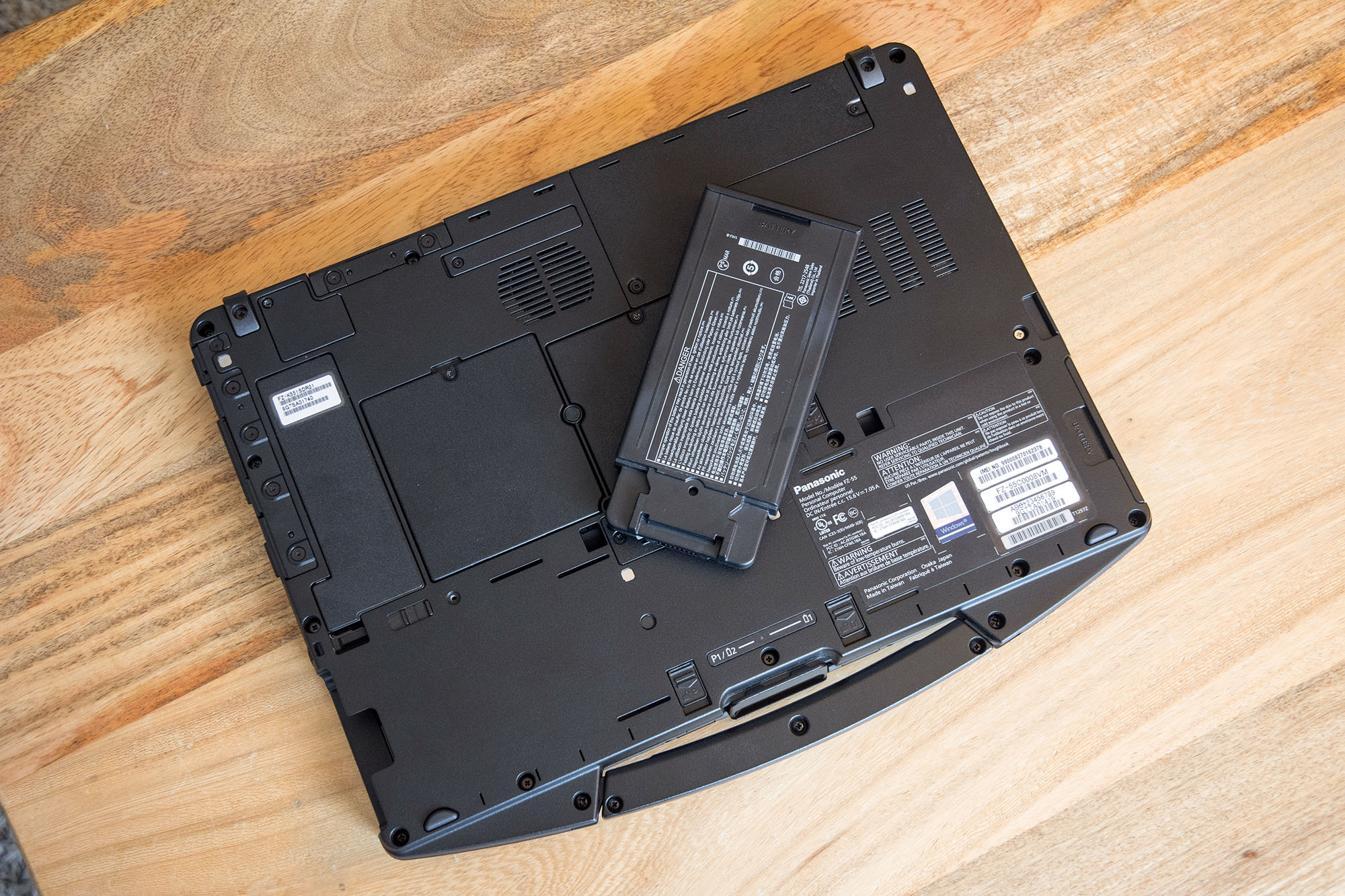 Battery life depends on how you set the laptop up. The two slots on the side can take various accessories, but of course one of them has to be a battery. With one battery, Panasonic rates the battery life at 20 hours. If you don’t have another accessory in the second slot, and you don’t mind the extra weight, you can throw in another battery and double that to 40 hours.

Most laptops these days are rated at eight to twelve hours, and you’re lucky to even get near the rating. If you’re running Chrome with a few tabs open, or any other program that eats resources, that figure often drops to half the rating. Sometimes it’s tough to get through a day on most laptops. This is simply not a concern with the Toughbook 55. With a single battery, any day will be an all-day battery life kind of day. Even with Chrome, Photoshop, and other apps open, you’ll still be getting over 10 hours of battery life with ease.

Throw in a second battery and the fun begins. Sure the weight gets a little crazy, but 40 hours of battery life is simply insane. It’s such a trip seeing “1 day and X hours remaining” when it comes to battery life. And if you’re careful (AKA don’t use Chrome), you can actually get close to that number! But even if you don’t, that’s a few days of use.

And best of all, the batteries are hot-swappable. So if you somehow need even more, you can swap a battery out while the laptop is on. 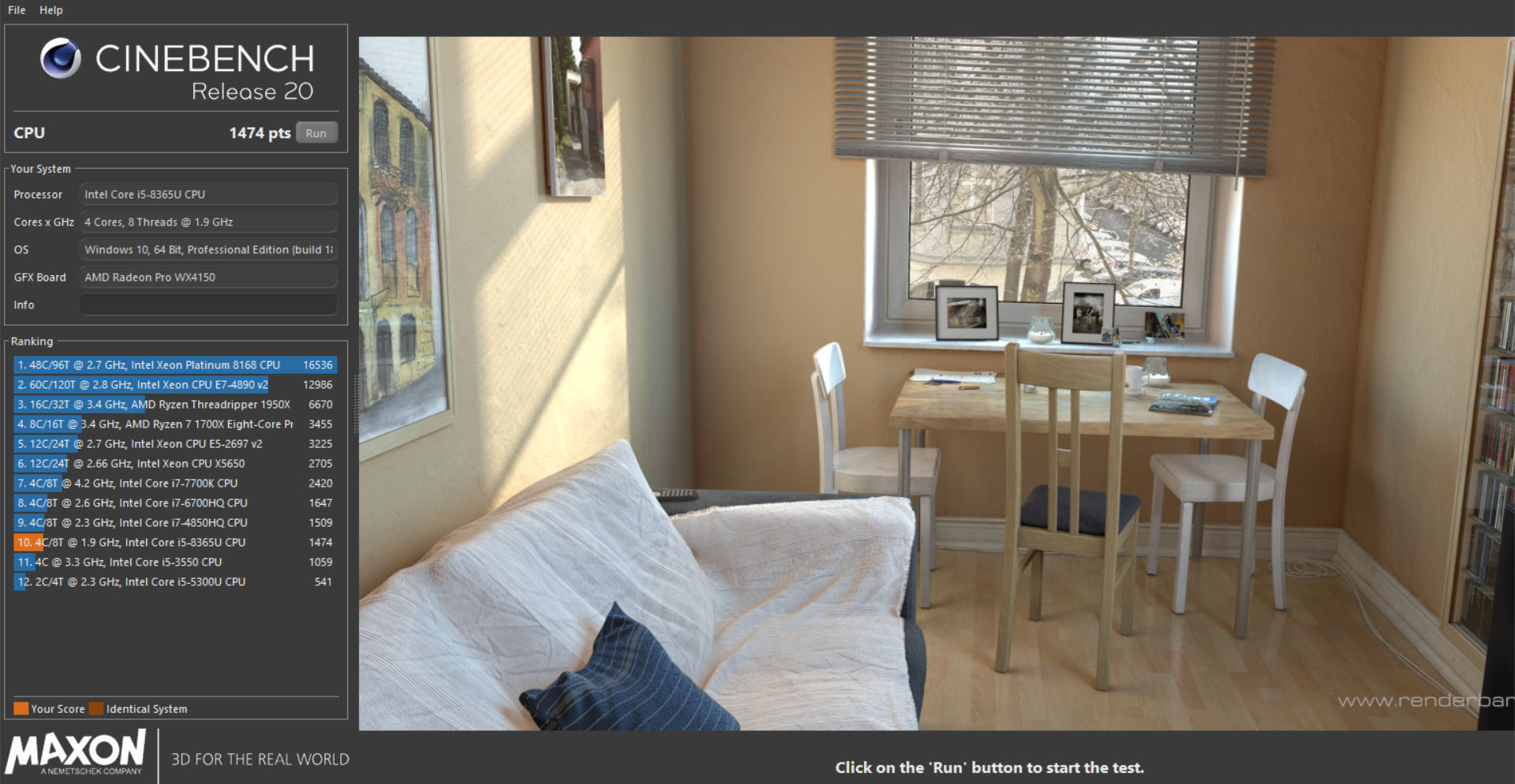 Cinebench scores show the i5-8365U performing well with a score of 1474, as expected. The difference in power between the i5 and i7 isn’t huge, so the i5 is more than adequate here. 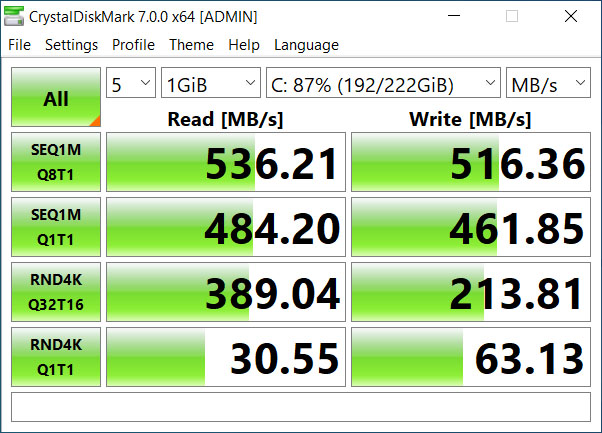 CrystalDiskMark shows about what we’d expect for an M.2 SSD. It’s bottlenecked by SATA III, and an NVMe drive would perform much better, but it’s still plenty quick. 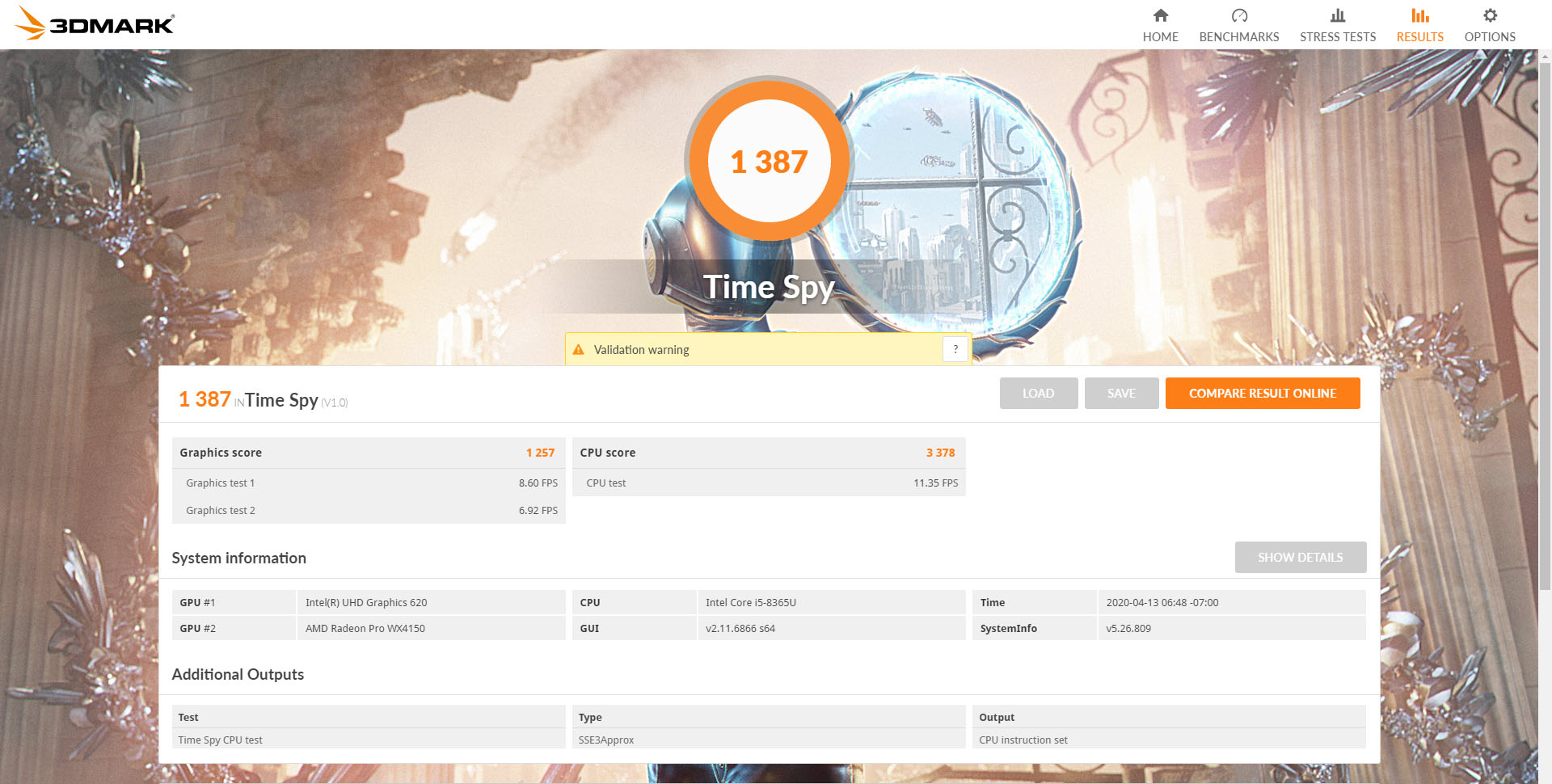 3DMark results show that the Radeon Pro WX 4150 GPU is actually pretty powerful. Where the Intel UHD 620 integrated graphics would score around 360 in 3DMark, the AMD GPU managed a 1257 in the GPU category.

The GPU is a professional workstation card, not a gaming card, so don’t expect miracles for playing your favorite games. 1080p performance is pretty average so new games will be tough, but older games will run just fine. 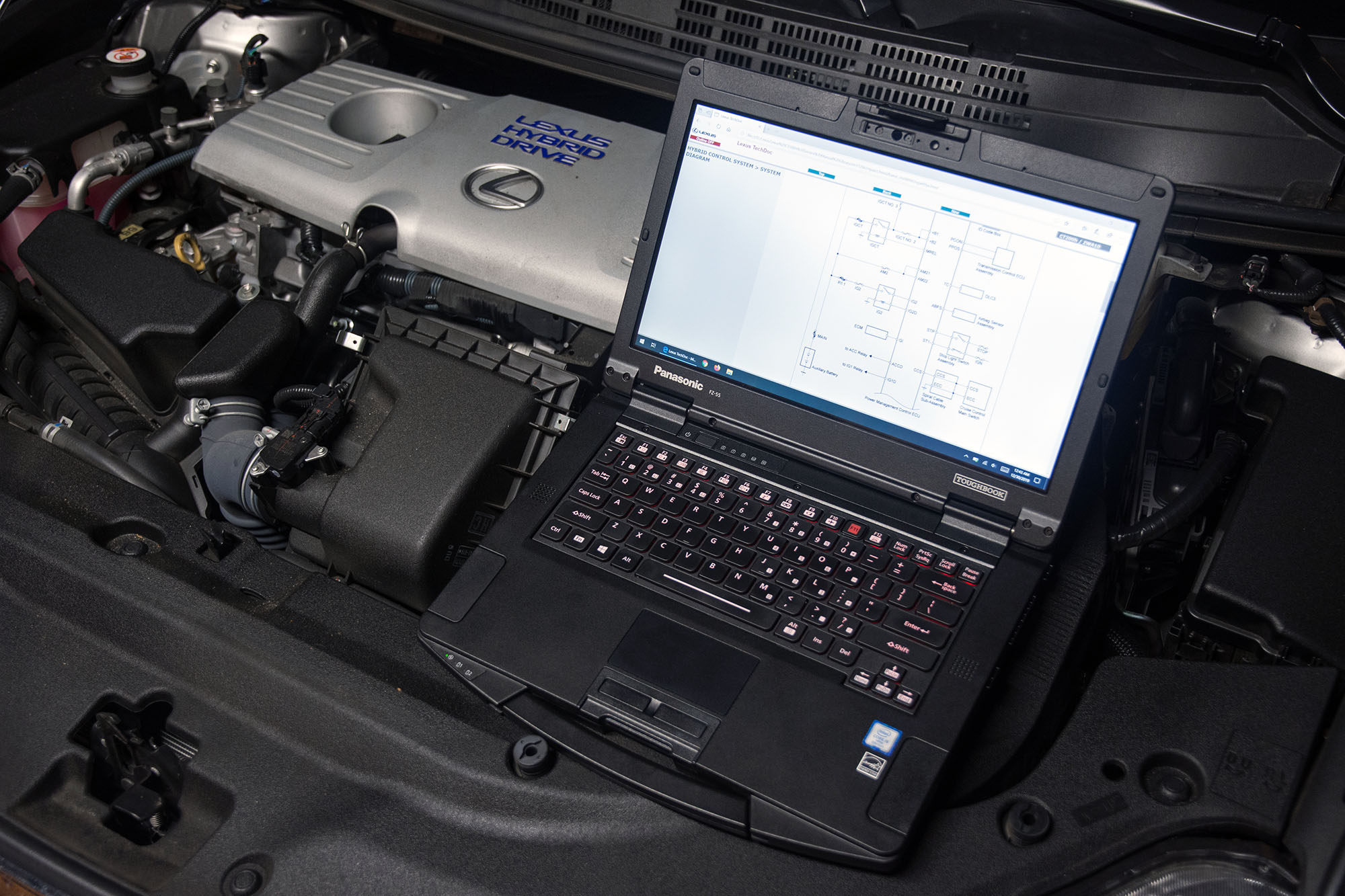 Much of this review was written from the perspective of a consumer. And shockingly, I really love to use this laptop. So much of what Panasonic did to cater to its customers’ rugged needs translates to a great consumer experience, like the crazy battery life and a plethora of features with more available through modular add-ons. It’s such a great execution, even if it comes at a price.

If you’re a consumer, you may not consider one of these for daily use. Maybe you will, and you won’t be disappointed. Maybe you’re a home mechanic and like to look up repair guides in the garage but don’t want to ruin a delicate MacBook with dirty hands. However, this is aimed at businesses and that’s where it excels. A business can customize it exactly to their needs and upgrade it down the line, and that’s perfect when you need a device that can take a beating. It has a three-year warranty with US support. It’s even backwards compatible with all older Toughbook 54 docks and chargers, so an upgrade to your business fleet is painless.

At around $2300 MSRP for a base model and $2800 for one equipped like this, it’s not cheap. But whether you’re a business owner or consumer, take a look at the Toughbook 55. It might suit your needs perfectly.