A smartphone is typically the first thing most of us think of when we consider Android-powered devices, but over the past few years, Google’s operating system has become one of the most popular smart TV platforms as well. Due to Android TV’s flexibility, it can be installed on puck-sized boxes or simply as the main operating system for a new TV.

The Hisense H9F series of smart TVs do just that, merging their latest LED panels with an extremely versatile platform. The end product is great, but there’s still some room for improvement.

The H9F Series from Hisense comes in 65” and 55” sizes. Besides the difference in size, both models offer the same specifications and user experience. Compared to last year’s H8F Series, the H9F is a huge step up with improvements to its full-array local dimming, contrast ratio, peak brightness, HDR and a reduction in panel reflectiveness.

While the larger Hisense 65 H9F made its debut at $999, the TV’s price has dropped to $799 and the 55-inch model can be purchased for $550, making them among the most affordable 4K TV’s in their respective size categories. But are they any good? Let’s find out. 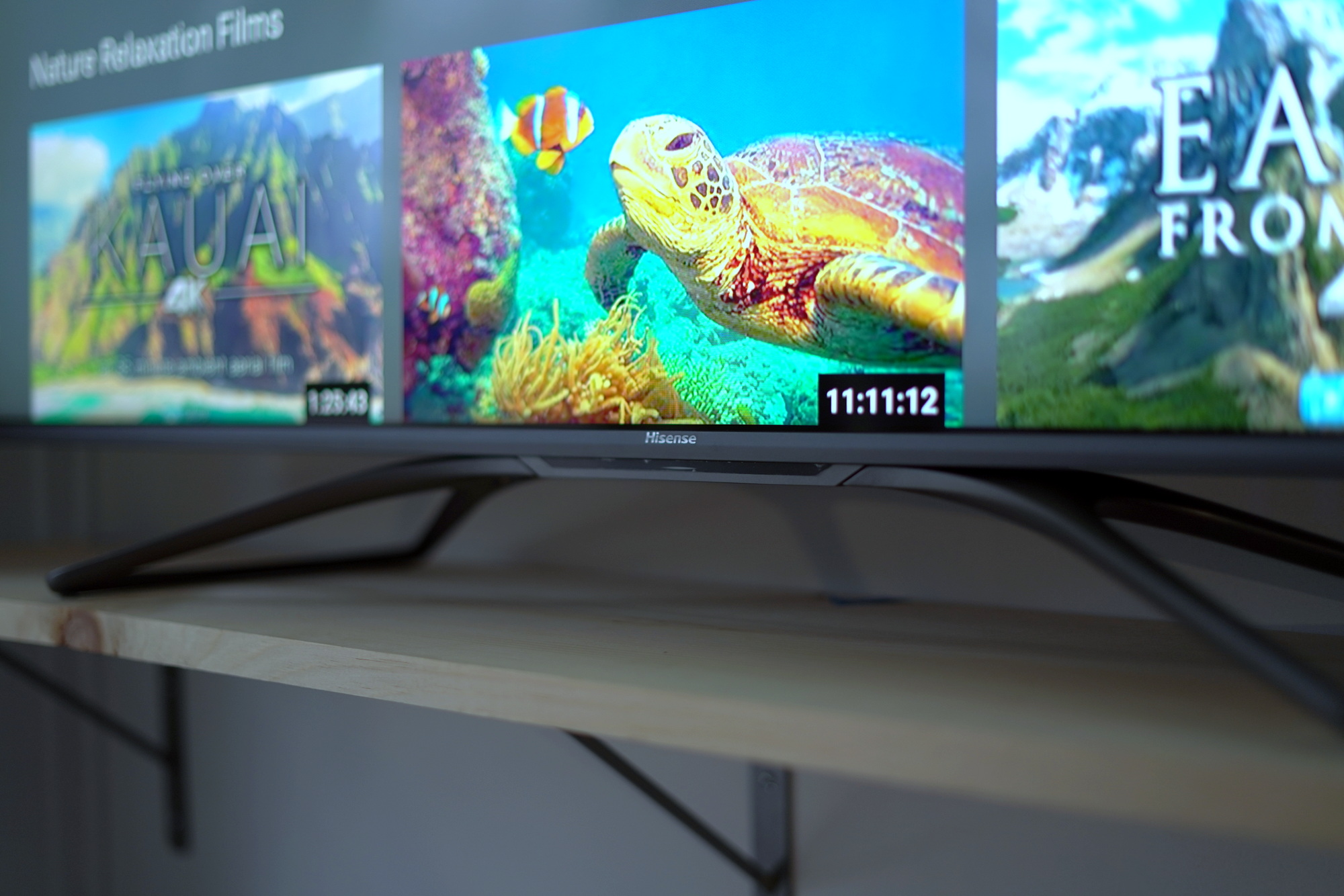 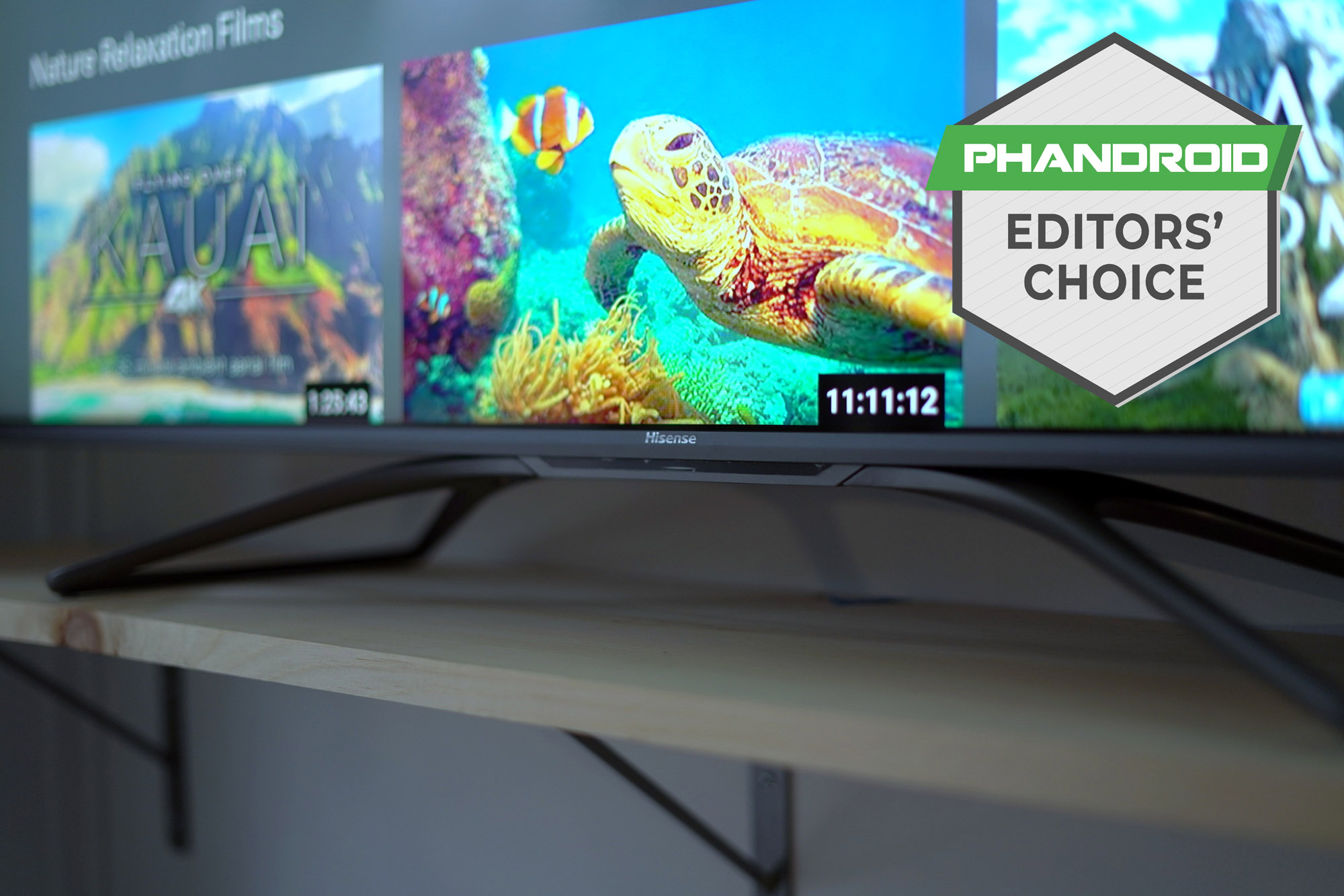 When you remove the TV from the box, you’ll immediately notice the near bezel-less design on the top and sides, featuring a sleek chamfered edge. The build materials include a combination of metal and plastic, giving the TV an overall sleek and modern look which is accentuated by the uniquely designed aluminum stand with loop-around legs. It offers decent stability, but there’s always the option to mount it to the wall if you’re not a fan of the look.

The only part of the TV that looks and feels cheap is the back plastic panel. Fortunately, it’s not something you’ll be looking at or touch often once you get the TV all set up. 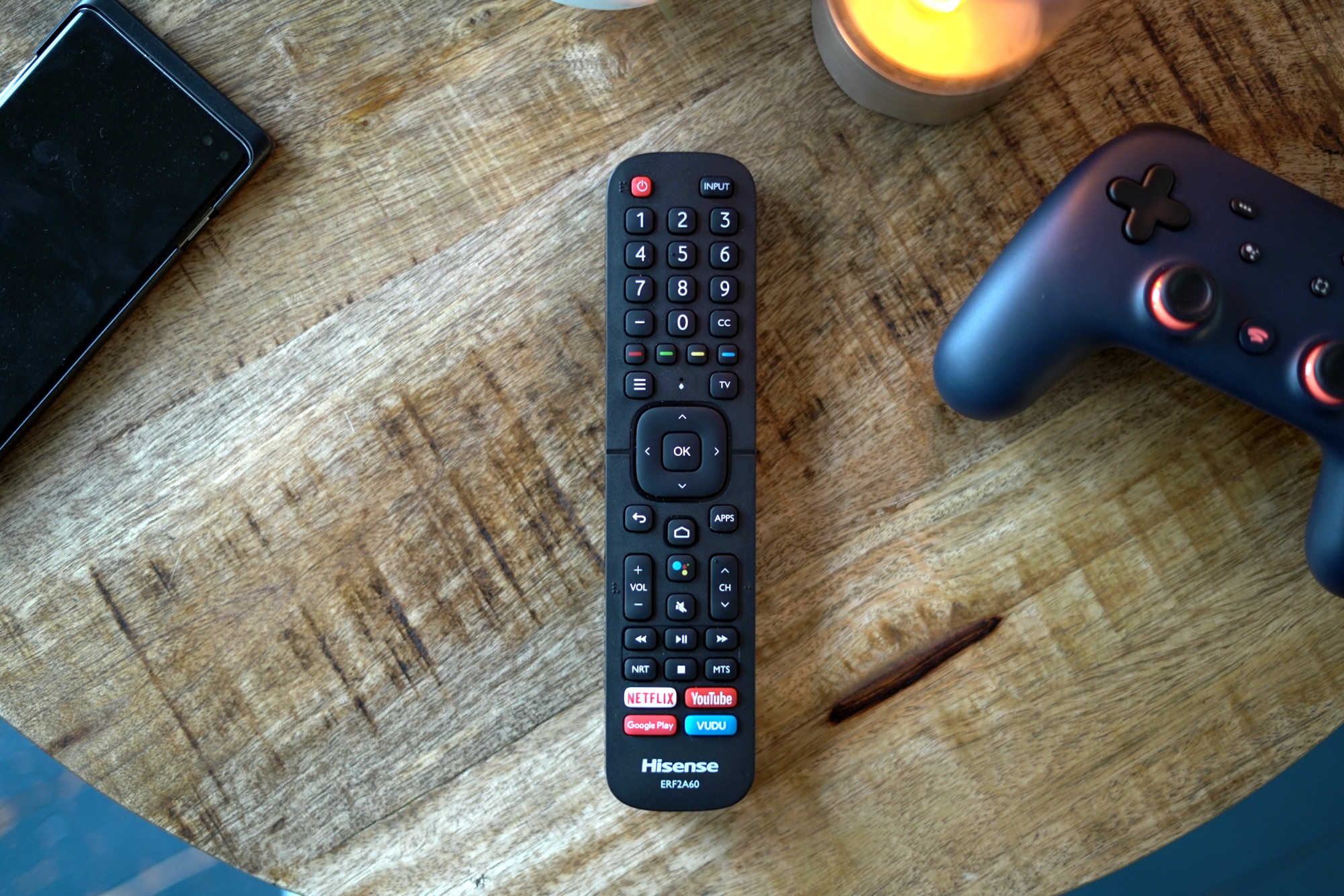 Unfortunately, Hisense has limited the number of physical buttons on the TV to just one. The button can be used for on/off and input controls, but you will be forced to use the remote to change channels or control the volume.

Coming from a Roku-powered TV, the remote that Hisense has included feels clunky and outdated. Jam-packed with nearly three dozen buttons, it looks like the remote control your cable provider tortured you with for the past decade. It’s perfectly functional with dedicated buttons for controlling Android TV or jumping directly into some of its most popular apps, but it simply doesn’t project the same fit and finish at the TV itself. 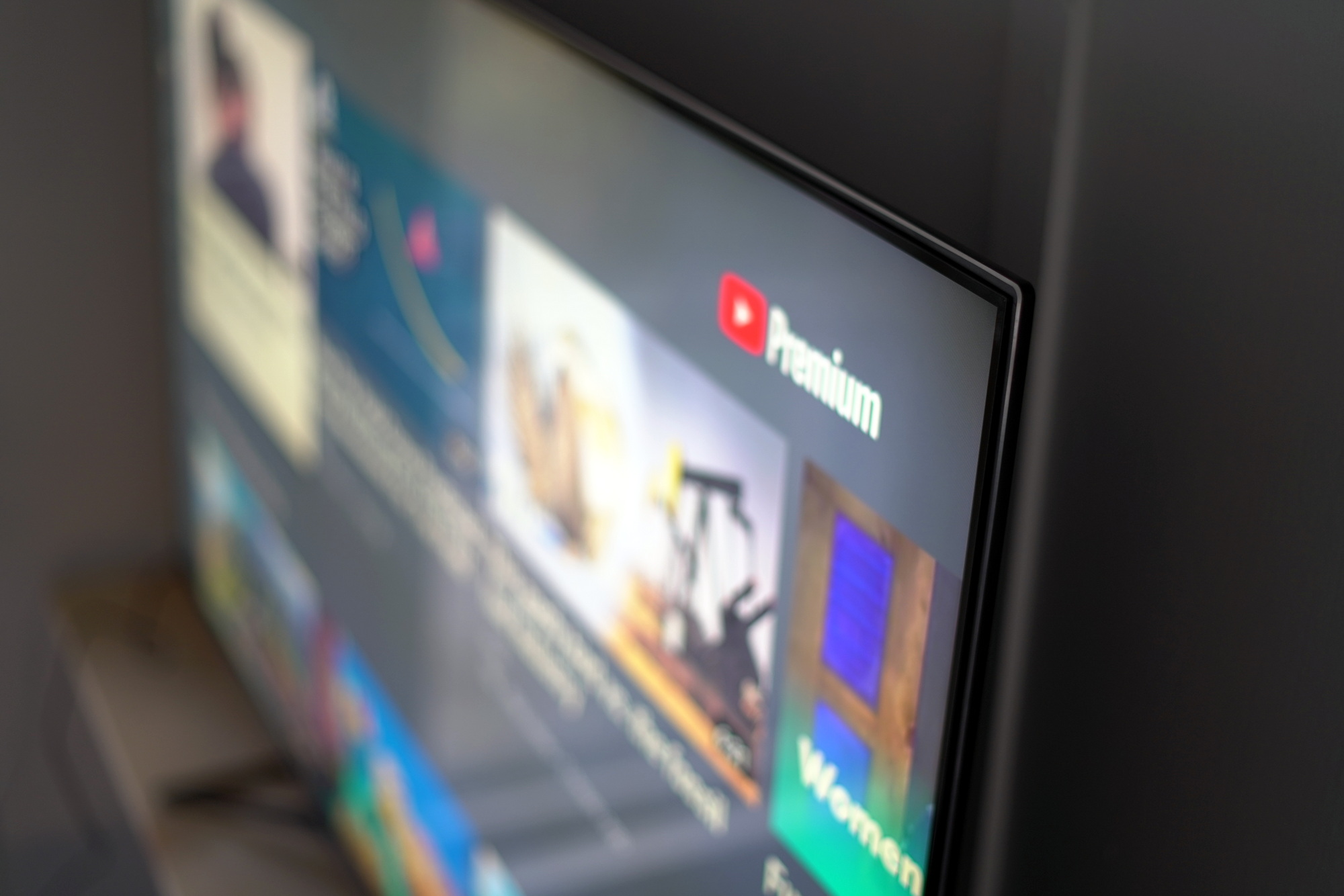 The LED panel itself features a Hisense’s Quantum Dot technology with full-array local dimming which delivers over 1,000 nits of brightness on SDR content, but that brightness pushes up to 1,200 nits of peak brightness when displaying HDR 10 content which looks absolutely spectacular. The contrast ratio is better than TCL’s 6 Series TVs, but still not as good as Vizio’s M Series Quantum TVs which made their debut in 2019 as well.

The black levels it produces are very dark, even in a well-lit room, but the panel truly shines once ambient lighting is turned down. The full-array local dimming is typically good but can be slow to adjust in fast-paced scenes. I also experienced vignetting around the display’s corners when a bright white menu on screen. It’s not something you’ll notice while watching content, but you will definitely see it from time to time in apps or game loading screens.

When it comes to viewing angles, picture quality retains its fidelity up to 25-30 degrees. After that, colors begin to wash out and black levels shift. This is quite normal for VA (vertical alignment) type panels, something that doesn’t affect OLED panels if you’re looking for better viewing angles.

If you’re a gamer, you’ll likely be impressed by the 3.4ms response time. This results in less blur for fast-moving objects or scenes, making it ideal for action movies or gaming. Hisense was also able to reduce input lag to just 16Ms at 60HZ at all resolution when in game mode compared to over 100ms when the feature isn’t turned on.

While the TV offers great visuals, the audio experience isn’t that impressive. The Hisense 55 H9F comes with 2 15w speakers which can get up to 87 decibels. Unfortunately, there’s very little bass in the mix, though the sound profile is flat and pretty clean with low distortion, even at high volume.

For a complete cinematic experience, we highly recommend picking up a soundbar or surround sound system. 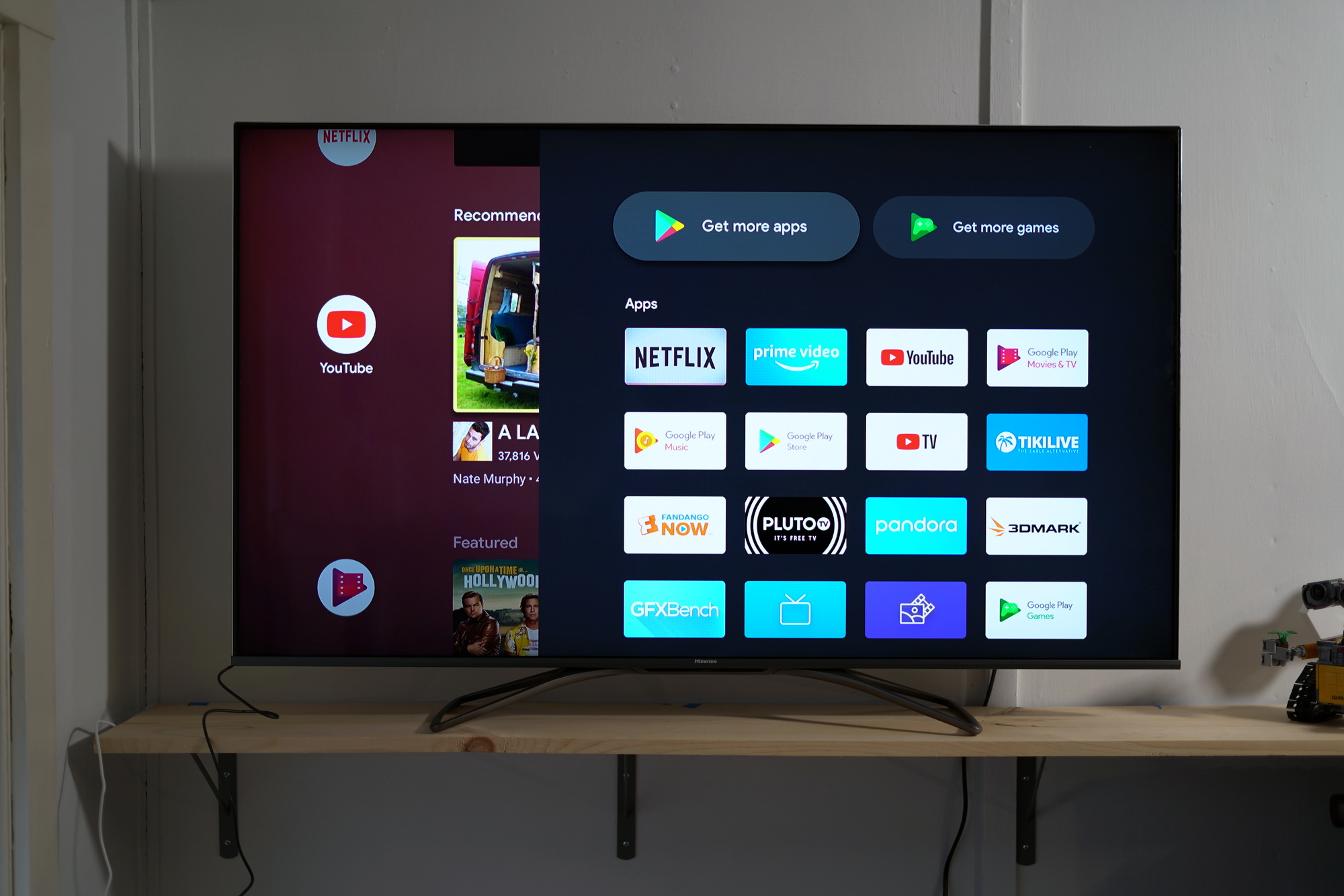 Android TV essentially offers the same experience, regardless of which TV you’re using. Personally, I find the home screen layout extremely intuitive with suggestions from Netflix, YouTube and other streaming services based on my viewing habits.

There are only a handful of pre-installed apps when you turn the TV on for the first time, but jumping into the Play Store will reveal hundreds of options from traditional broadcasters like NBC, CBS, and ESPN in addition to lesser-known services like Xumo which aggregates hundreds of online broadcast streams.

The Hisense 55 H9F could also double as a casual gaming machine thanks to Android TV’s library of games. The experience isn’t phenomenal as the built-in processor is less powerful than the chips used in smartphones from 2015. But connect a Bluetooth controller to the TV and you could sit back and play Dead Trigger 2, Ice Rage or even GTA: Liberty City Stories.

One of the newish features built into Android TV is Google Assistant. Like on your smartphone, you can ask for the weather forecast, get answers to random facts or ask it to tell you a joke. But since it’s integrated into the platform, you can also ask it to play a specific video on YouTube or the next episode of the Netflix series you’ve been binge-watching.

Unfortunately, the under-performing processor also takes its toll on the fluidity of Android TV’s interface and the Google Assistant from time to time. Scrolling through the menus in apps or Android TV’s main UI can feel a bit sluggish at times and using the Google Assistant can take a long time to respond, especially if you activate it right after you turn the TV on.

For many, buying a new smart TV is a harder decision than spending $1,000 on a smartphone. The good news is that the Hisense H9F series is extremely affordable, offering 55-inch and 65-inch models at $550 and $800, respectively. When compared to the competition, that’s an incredible steal!

The Hisense H9F TVs certainly aren’t perfect. The audio experience is underwhelming and the performance of Android TV is a bit lackluster with the processor Hisense chose to go with, but the TV panel itself is exceptional, making the two Hisense H9F models the current rulers over the budget 4K TV Kingdom.

The only question you should really be asking yourself is if you can fit a 65-inch TV in your living room or if you’ll need to go with the 55-inch model.

SEE IT ON AMAZON

Phandroid uses affiliate links to help support the creation of this content.