Lenovo has been one of the most dominant players in the 2-in-1 space with its Yoga line for years, with the Yoga C940 as the latest iteration. While I’ve had coworkers that used them and I had a chance to spend a few minutes with some of the previous models here and there, this was my first chance to use a Lenovo laptop to do some real work.

Without spoiling the review, after having worked with it for a few weeks, I can certainly see why they have been so popular. Lenovo has really refined this design and while there are still some areas for improvement, the overall experience is compelling for those who want a laptop but would prefer a tablet experience for certain tasks. But that’s oversimplifying things, so let’s take a closer look at the Lenovo C940 and you can decide if the 2-in-1 lifestyle is a solid fit for you. 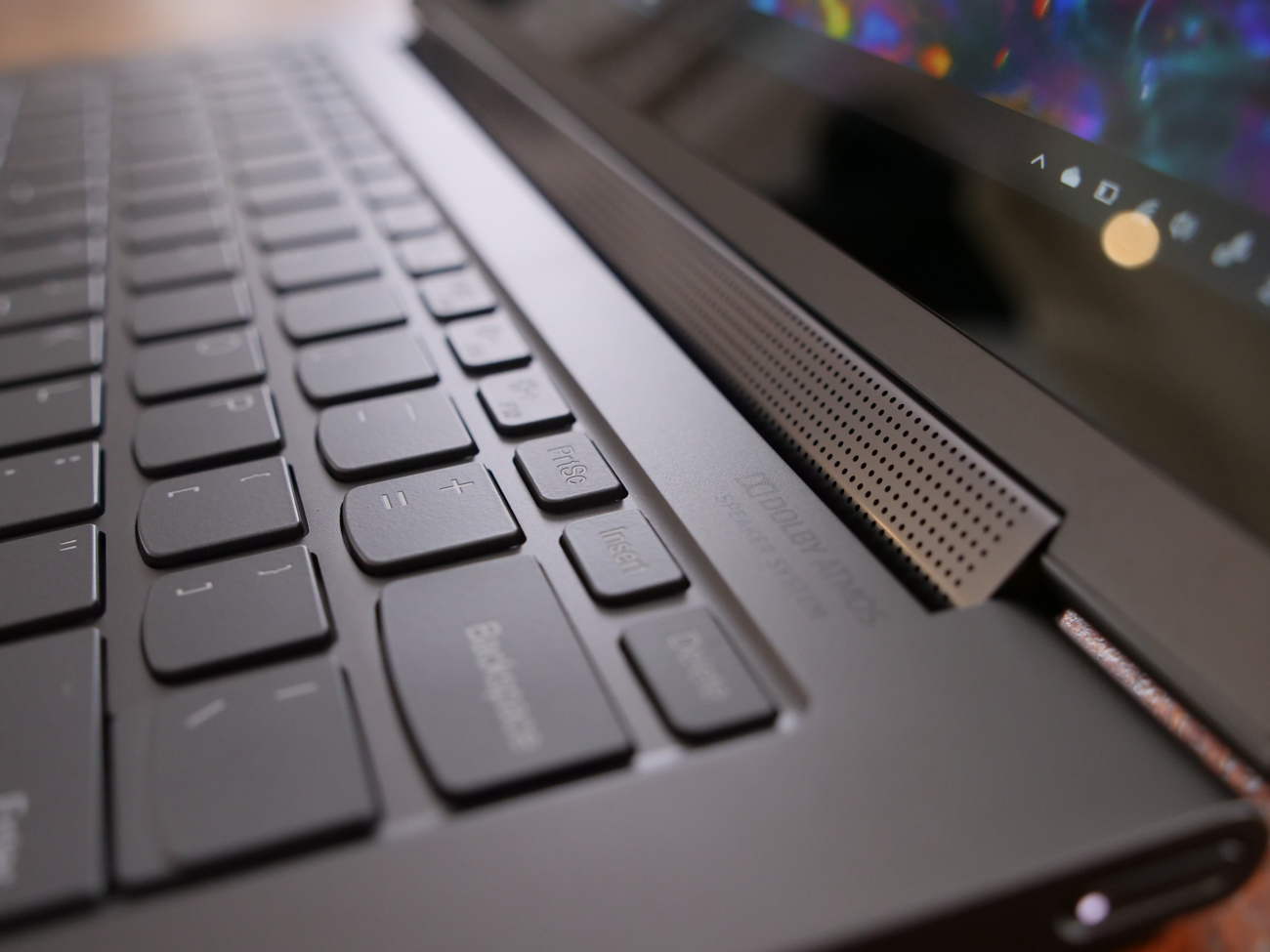 I was impressed with the Lenovo Yoga C940 14-inch right out of the box. Put simply, it’s a good looking laptop. I like the slightly tapered design starting from the hinge with its exposed speaker grille and thinning out at the front. The asymmetry of the top and bottom half of the laptop at the back gives it a more interesting look than the standard laptop design we’ve all come to expect. At just under 3 pounds (2.98 to be exact) the solid aluminum build isn’t one of the lightest available, but it’s comparable to its main competition in this class from Dell and HP and feels rugged without adding too much weight to your bag.

Around the outside of the laptop, the right side is almost featureless with the exception of the power button. I don’t mind this placement as it’s about an eighth of an inch from the back of the laptop, so still easy to locate without looking for it.

The back of the laptop has the prominent speaker grille in the hinge and the stylus. Having just tried the Samsung Galaxy Chromebook at CES, I have a slight preference for the pop-out release offered in that stylus, but Lenovo did provide a substantial enough indent that even if you have virtually no fingernail it’s easy to get the stylus removed on your first try.

The left side of the Lenovo Yoga C940 one USB-A and two USB-C ports, along with a headphone/mic jack. I like the inclusion of a USB-A port since our bold all USB-C future still isn’t quite perfect. I would love another USB-C port on the right side just for the convenience of being able to charge on either side, but given the battery life on this laptop, it isn’t a serious concern.

Opening the laptop you have a webcam at the top of the screen with a small switch to place a privacy cover over the camera when not in use. The webcam does lack Windows Hello facial recognition support, but for a biometric login option, there is a fingerprint scanner at the bottom right corner of the keyboard. The touchpad is reasonably expansive and was responsive in my use. 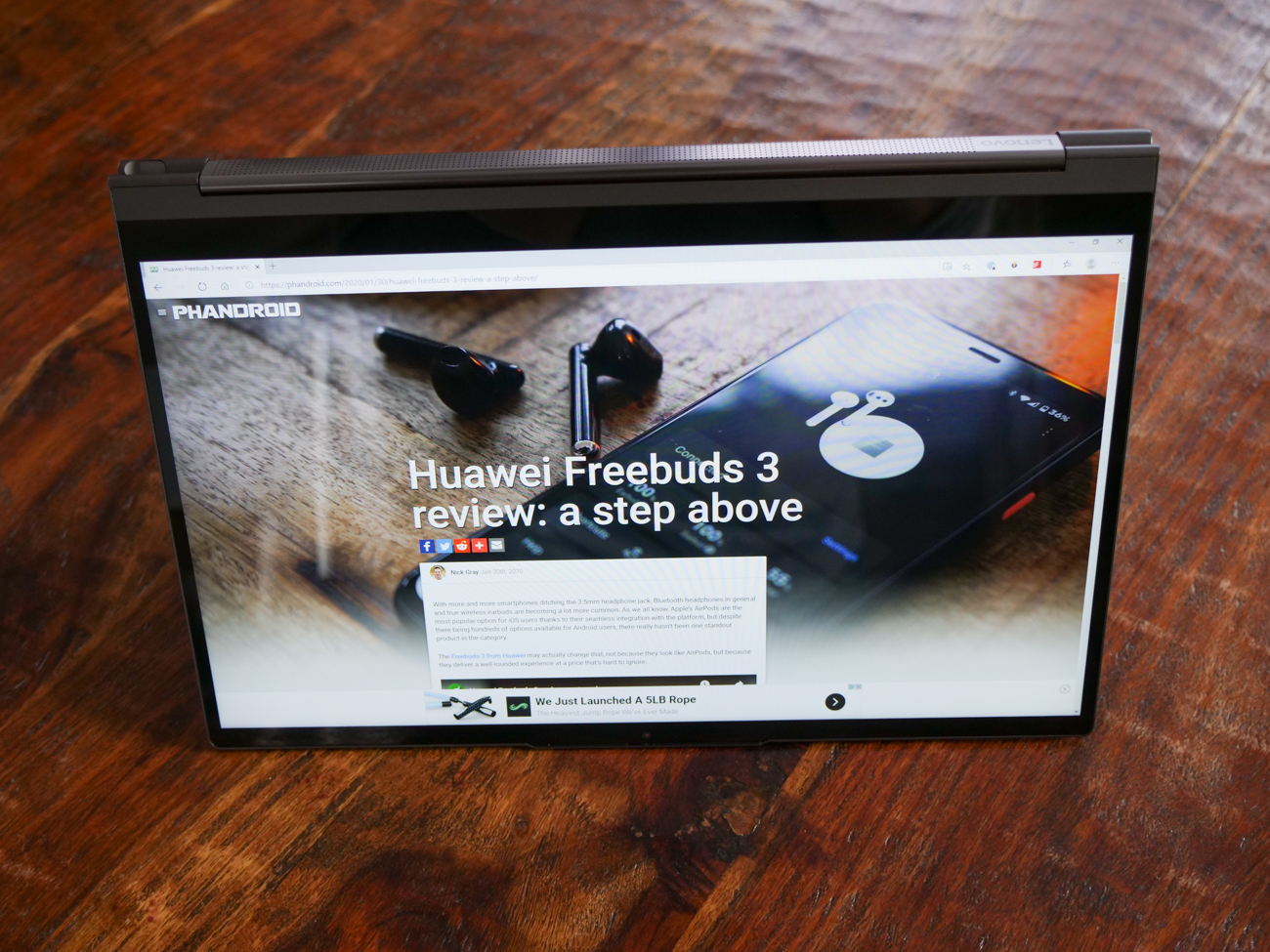 The Lenovo Yoga C940 has a 14-inch display and there are two different options for resolution. The model I tested comes with a full HD 1080p touch screen with up to 400 nits of brightness, but the high-end option is a 4K touch-screen rated at 500 nits.

I’m certain the 4K looks gorgeous, but I was not at all disappointed by the display in the 1080p model. The strongest pitch for the 4K model would be those that plan to use the C940 heavily in its tablet mode as the 14-inch in 1080p at that proximity doesn’t look as crisp. But if you more of an 80/20 laptop to tablet split the extra battery life from the 1080p screen is probably a trade worth making.

The laptop defaults to a 150% zoom, which feels cramped to me, but a quick switch to 100% and my claustrophobia was cured. The brightness was ample enough to deal with my local coffee shop on a sunny day, which is almost entirely windows, so it should be able to handle almost any environment.

While the C940 doesn’t offer HDR or wide color gamut, I found colors to be vibrant and unless you are a major consumer or producer of HDR content I don’t see this as a problem. 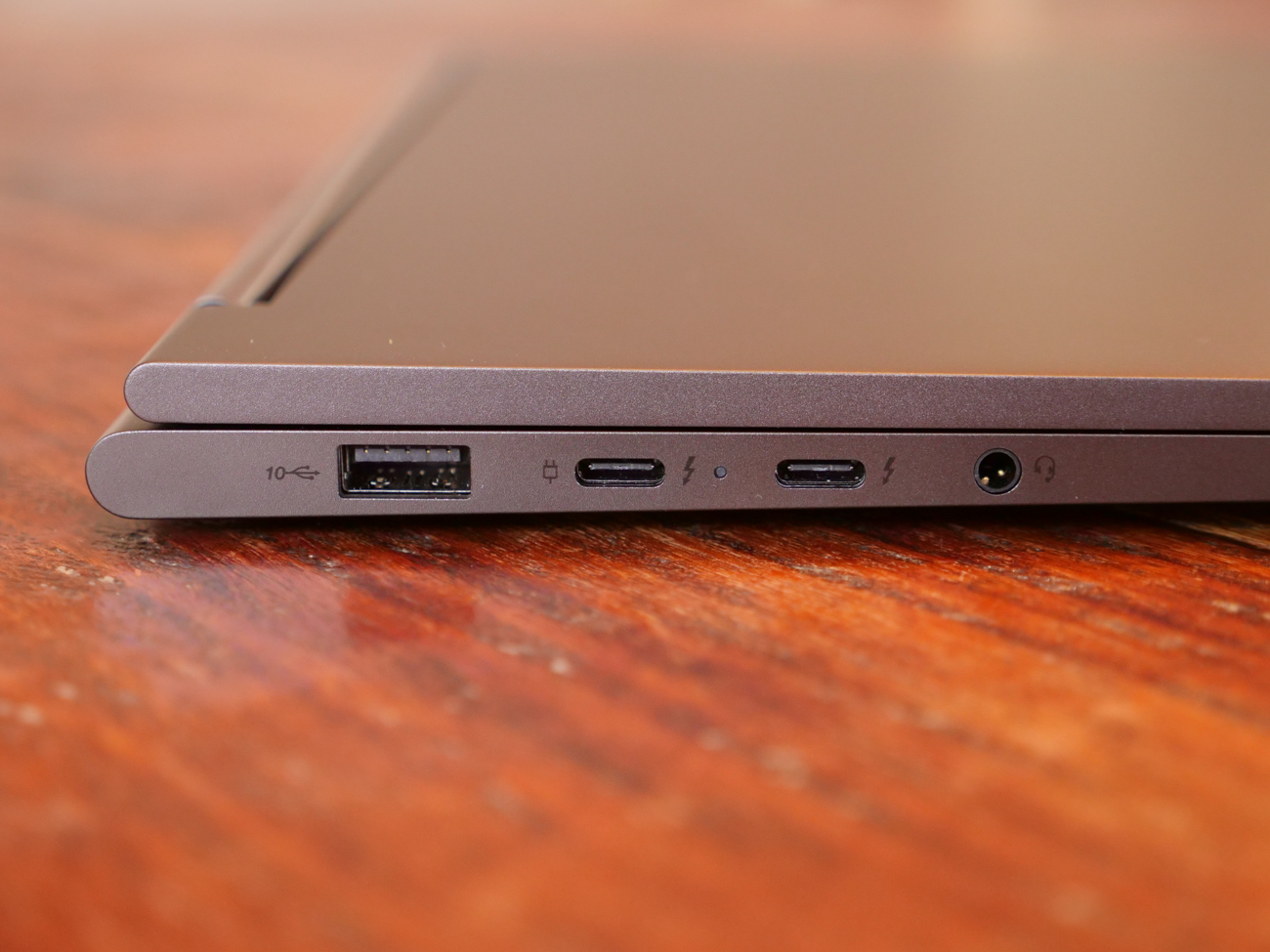 I can’t obviously speak to the base model, but my mid-tier option has handled all of my standard daily tasks with ease. Obviously, word processing and spreadsheets aren’t a problem at all, but my often abusive number of Chrome tabs (although halfway through my review I switched to the new Chromium version of Edge, a bit more on that later) and photo editing are a bit more taxing but never caused by noticeable stutters or slowdowns.

Obviously I wouldn’t advise buying this thing for heavy gaming or if you are a professional video editor. For that, the 15.6-inch version of the Yoga C940 which adds an NVIDIA GeForce GTX 1650 would be a better option. But for my use of writing, extensive web work, photos and the occasional video in Premiere, the Yoga C940 14-inch is easily up to the task.

I’ve looked at some of the benchmarking for the Lenovo Yoga C940 just to confirm that I’m not hallucinating or delusional in my experience with it and it goes toe to toe with the Dell XPS 13 2-in-1 from October and even edges out the Surface Pro 7. 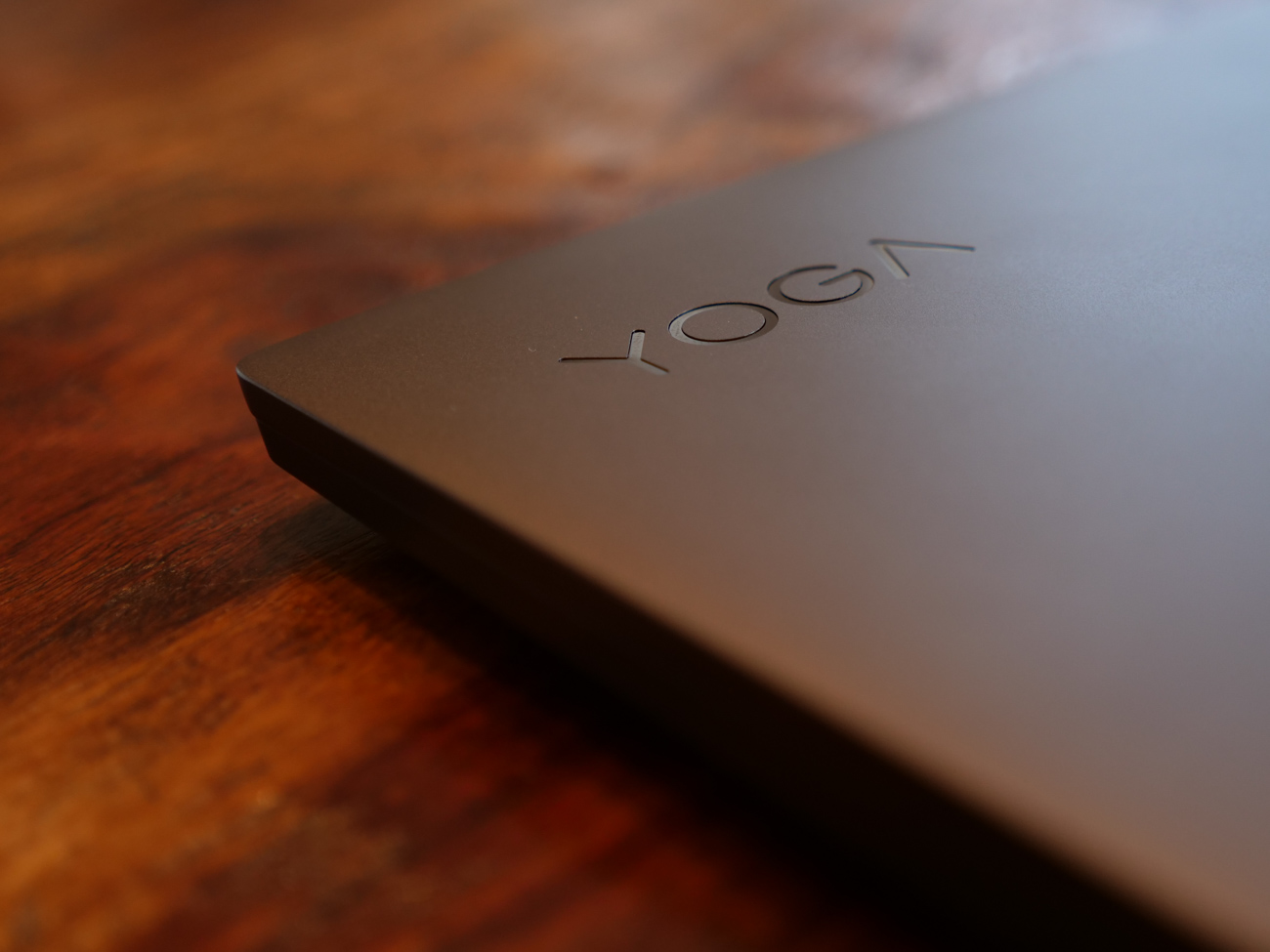 While I don’t think I can picture hitting the 15-hour mark that Lenovo cites for the Yoga C940, I have no complaints about the battery life on my model. I did not do any formal battery testing, but I was getting approximately 7-8 hours on a charge initially with my standard assortment of office tasks, browsing, and media editing work.

When I switched to that from Chrome to Chromium Edge I saw a bump up to around 9-10 hours, consistently. Again I wasn’t doing formal tests so I cannot assert that my usage was identical on these days, but there weren’t any significant changes to my work and the results were consistent across multiple days.

If you don’t have any photo or video editing and are a little bit more judicious with opening a flood of tabs in your browser I’m sure the Yoga C940 could get you to 12-13 hours without a problem. 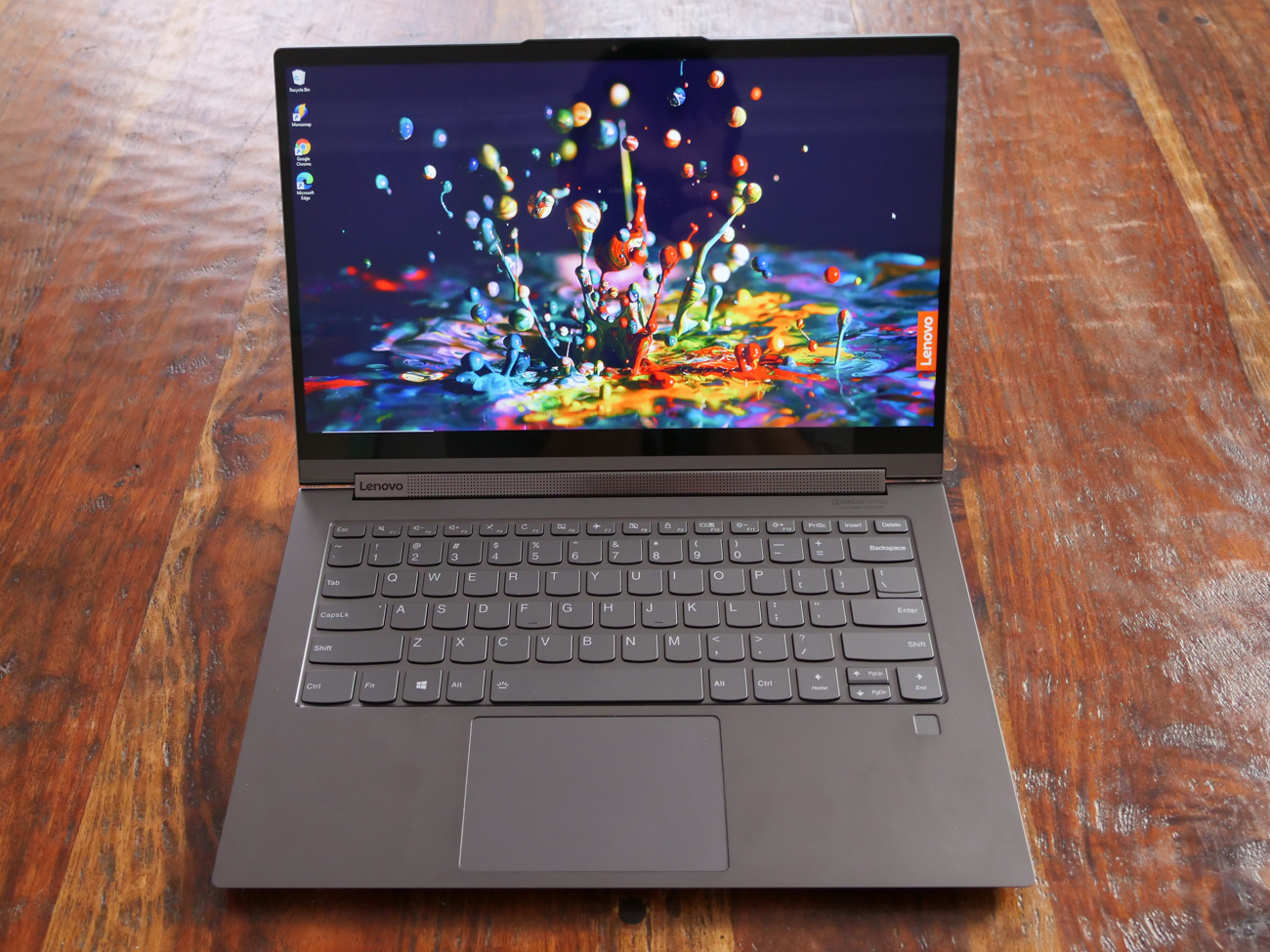 Until very recently, I was a 2017 MacBook Pro 15 user, so the fact that the keyboard on the C940 has worked throughout the entire time I’ve been testing it is already amazing to me.

However, beyond its reliability, it is a legitimately nice keyboard to type on. The keys have a nice solid clickiness to them without being obtrusively loud (again MBP 15 I’m looking at you). It definitely doesn’t suffer from the mushy laptop keyboard syndrome that afflicts a lot of Chromebooks.

The key travel felt solid too, comfortable to type on over the entire workday. I had no trouble maintaining my standard typing speed, it was about 3-5 WPM off normal, which is to be expected with any new keyboard and I have no doubt in another week or so I’d be up to speed. 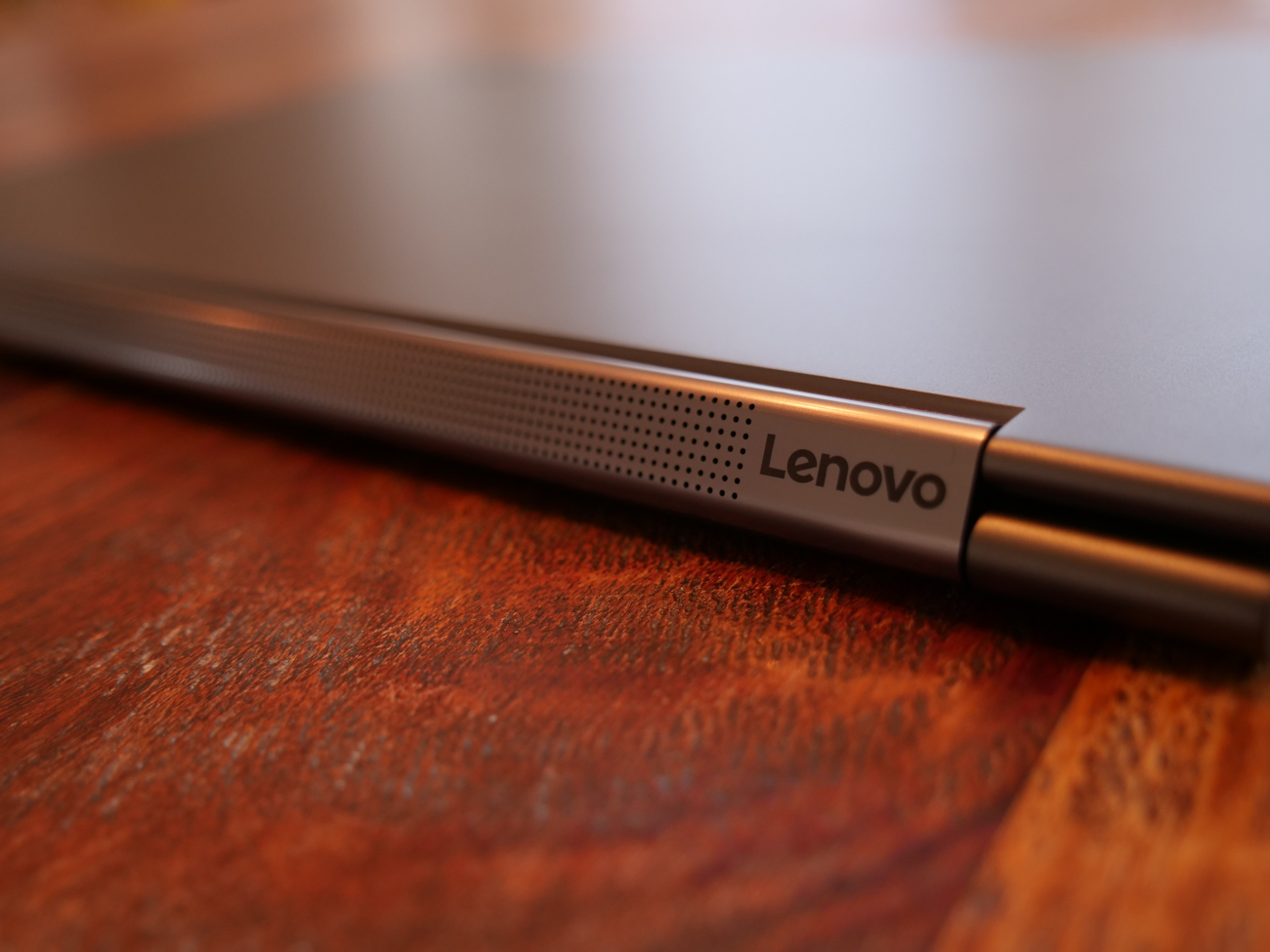 I’m going to touch on the speakers very quickly, as I both appreciate the soundbar in the hinge design and they are noticeably better than most. The design ensures that they are always firing at you whether you have it in tablet, tent, or laptop mode.

There are two 2W Dolby Atmos speakers inside the hinge and then a second pair in the bottom of the laptop. They stay very crisp and clear up to about 92% volume. Past that point, you start to get slight vibration, but honestly, it’s loud enough that if you needed it louder you should be using headphones anyway.

I didn’t use it much, but the Lenovo C940 offers dual far-field mic technology with support for Cortana or Alexa. I had no trouble with this working when sitting at the laptop and Lenovo indicated it would work at up to 13-feet and I was able to duplicate that and slightly beyond. Although, as I gave my laptop commands from across the room, I wasn’t exactly certain why I would ever be doing that on a normal day. 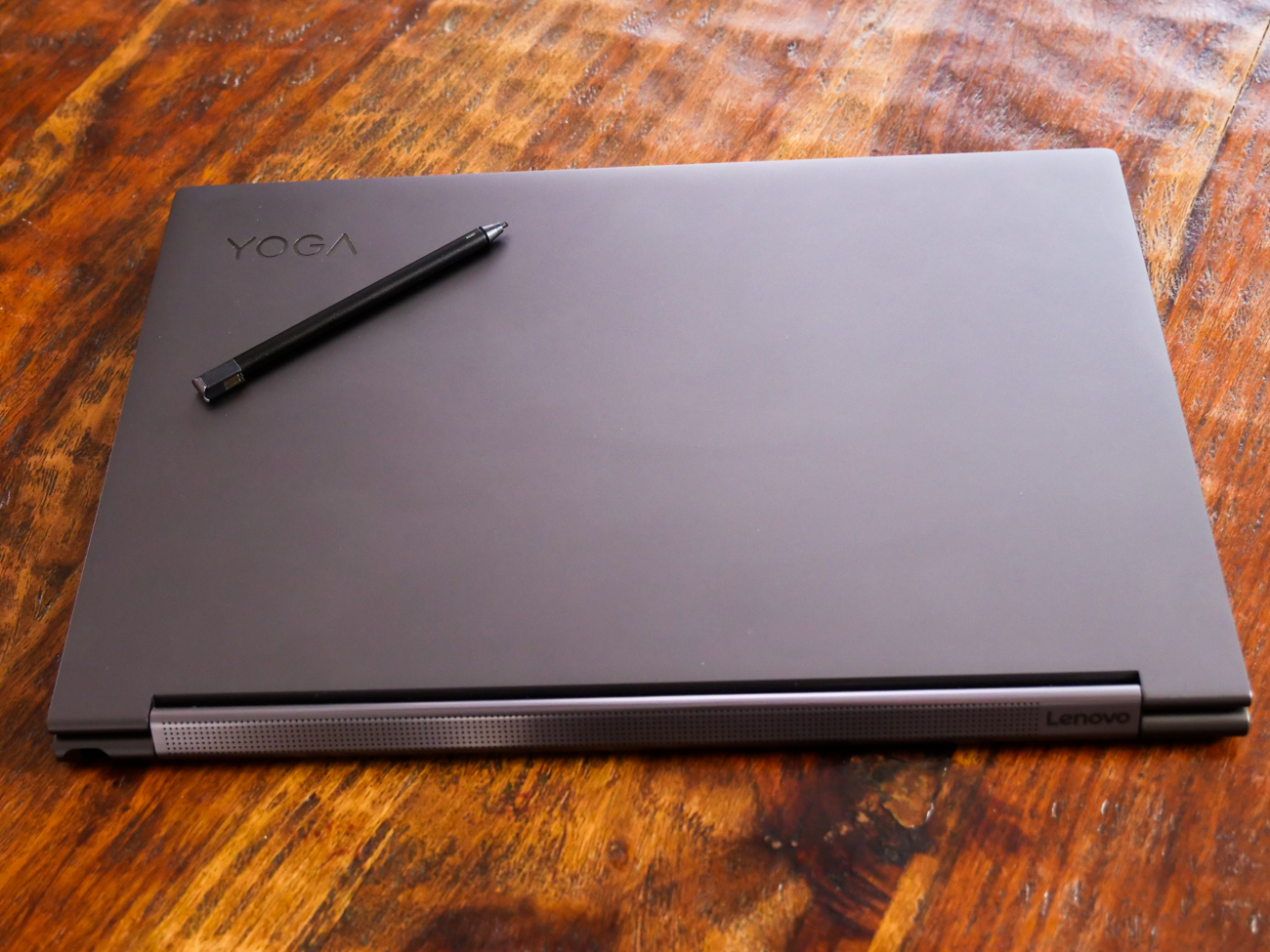 Now I’m not a regular tablet user anymore and I haven’t owned a 2-in-1 since the Surface Pro 3, so I am just not accustomed to using a stylus with my laptop at the moment.

I spent some time the Yoga C940’s stylus, doing some basic testing in OneNote and found it to be responsive and the pressure sensitivity worked effectively. It offers 4096 levels of pressure sensitivity to be precise, meaning the nightmarish scrawl you see in OneNote at the top of this article is just actually what my handwriting looks like and not any fault of the stylus.

You can get 130 minutes of active use on a charge. While I would like to believe that would be enough for almost anyone writing or drawing session, 15 seconds in its silo it gets back up to 80% or 5 minutes to push it back to 100%.

The fact that it is integrated into the laptop is definitely appreciated since when I had my Surface Pro 3, I would both lose my pen for long stretches and simply forget it regularly.

I’m working on a more thorough review of Microsoft’s Your Phone integration with Android (Your Phone Companion in the Play Store), but I’ll go over some of the basics if you aren’t familiar with it.

There are five main functions that you can take advantage of with Your Phone.

From the build quality, feature set and performance, the Lenovo Yoga C940 is a high-end piece of hardware, offering fantastic value at its price point.

I would recommend bumping up to the model to future proof yourself with the extra RAM and storage space.

SEE IT ON AMAZON

As I said at the outset, I was impressed with the Lenovo Yoga C940 from the moment I took it out of the box and it did not disappoint from there. While I’m not going to suggest it holds up to a true tablet, it’s a fantastic do-everything option for those looking for a laptop with a bit more flexibility than just having a touchscreen.

If you have incredibly high-end performance needs or want the absolutely lightest laptop possible, this isn’t going to be the answer for you. But if like most people you fall somewhere in between those extremes the Yoga C940 strikes a solid balance.

Lenovo has largely defined the 2-in-1 space over the last decade and the Yoga C940 is another solid example of why that’s the case. From the clever hinge design to the excellent speakers and solid construction the device feels and sounds great whether you are using it as a laptop, a tablet, or watching content in tent mode. If you are looking for one device to do it all for you, but want to be sure you are sacrificing anything on the laptop side of things, the Lenovo Yoga C940 is a great option.

Note: Phandroid uses affiliate links to help support the creation of this content.