The Creative Outlier Air was a set of true wireless earphones that had a shocking 10 hour battery life on a single charge. No, this doesn’t include case charging, as that gives you 30 hours total. Where the Apple AirPods were king with 5 hours and the Samsung Galaxy Buds one upped them with 6, Creative managed to stuff 10 into these.

Well the company didn’t rest on their laurels, because the updated Outlier Gold take it to a whole new level. They’re gold. And they claim 14 hours of playtime on a single charge. Unbelievable. Everything else is about the same between the two, so even though this is a review of the Outlier Gold, the Outlier Air will be identical in most regards. You know, besides that sweet dark gray color. 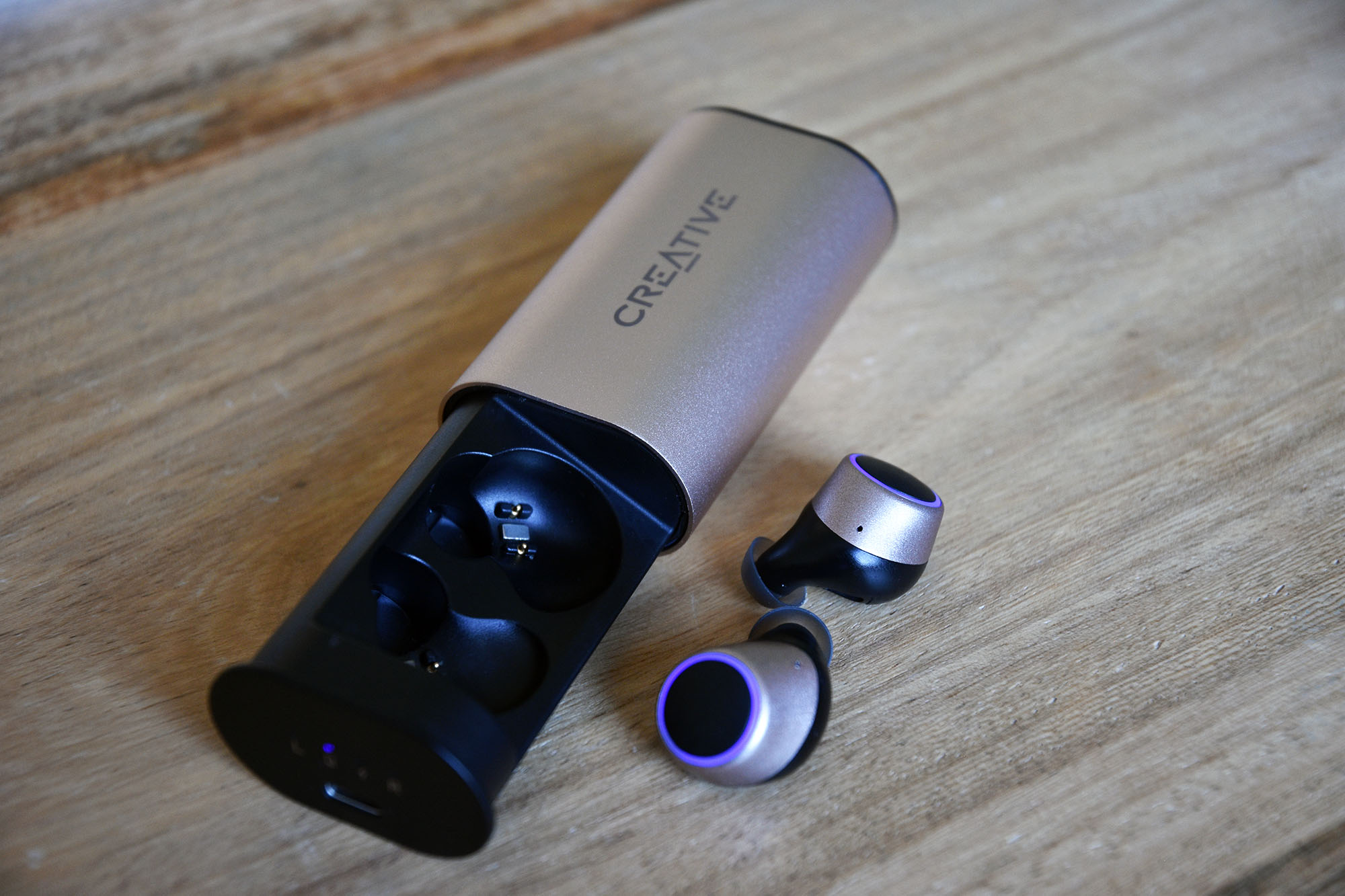 The Creative Outlier Gold come in a rectangular aluminum case. The case is a bit big compared to Apple AirPods or Samsung Galaxy Buds, but the battery life makes up for it. It definitely looks great, if you like the gold anodized finish. I do, but some may like the Outlier Air’s gray finish more. To get the earphones out, you push one side and slide a “tray” out of the case. Inside you’ll find the the earbuds nicely set in the case and magnetized in place. As soon as you open the case, the big rings on the earbuds start glowing. These rings are awesome, but they do have dead spots.

On the side of the case you’ll find four indicator LEDs. Two are for the state of charge of the earbuds, one is for the case, and one is to indicate charging. It’s not particularly elegant, but it’s functional. Under the LEDs is a USB-C port, which I’m always happy to see.

One issue I have is that the earbuds are not ergonomically positioned in the case. What I mean is that, if you remove one with two fingers, you can’t directly put it into your ear comfortably. You have to slightly rotate it in your grip to put it into your ear. Others like the Master & Dynamic MW07 are taken out of the case in the perfect position to be inserted into the ear. This is a very minor gripe but worth mentioning. 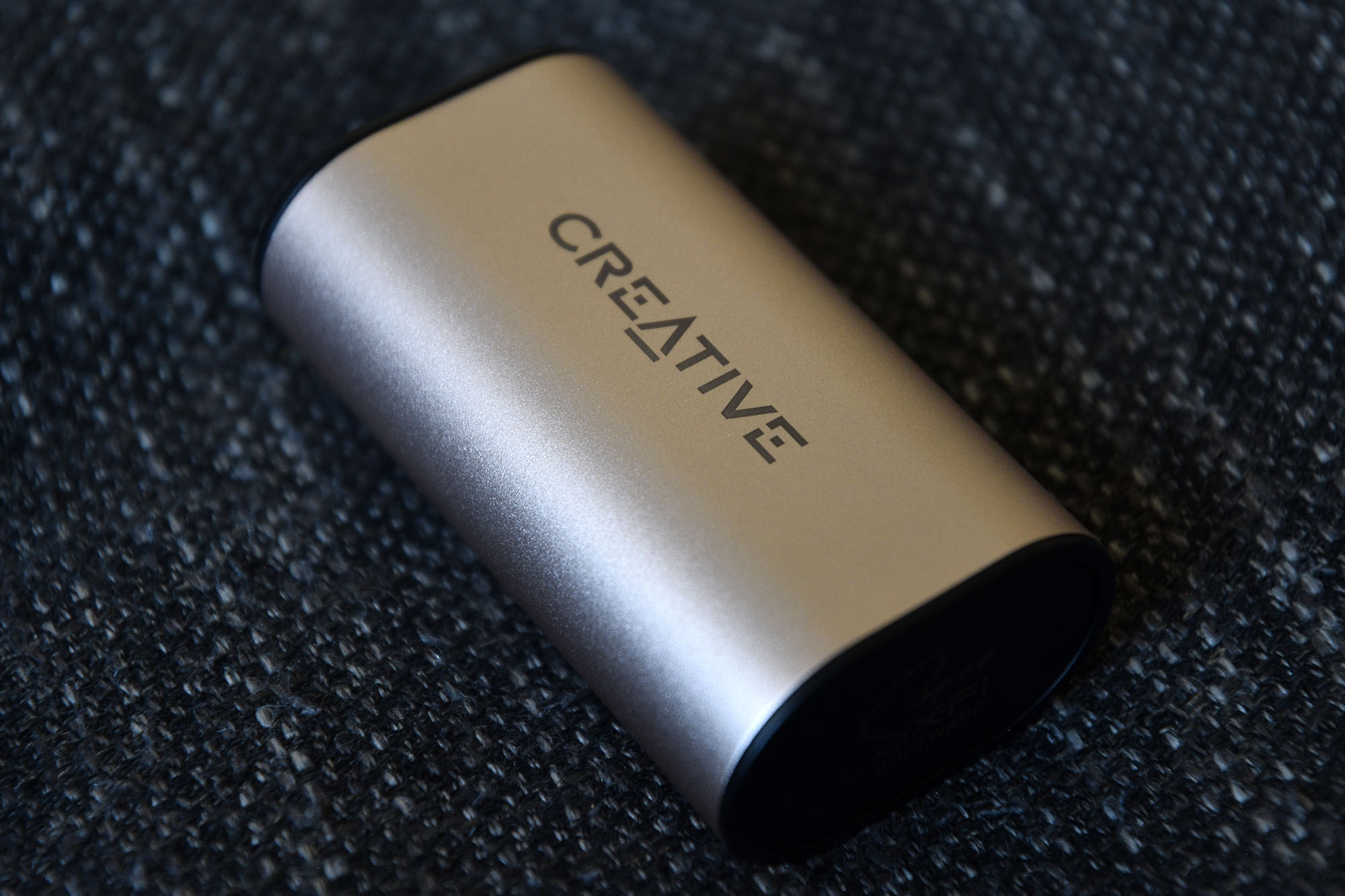 The earbuds themselves are made out of very solid, smooth plastic. That’s surrounded by an aluminum ring in the same gold color as the case. The button in the center has a nice, mildly rubberized finish. One major issue I have with the button is that it’s exceedingly difficult to press, especially once the earbuds are in your ear. Pressing the buttons while they’re in your ear causes discomfort. These earphones would have greatly benefitted from touch sensitive panels here.

This is a shame because the control system is actually really good. Where other earbuds don’t offer you full control, or force you to choose between volume or tracks, the Outliers have it all. Double clicking controls tracks. Holding the buttons controls volume. If the buttons were more comfortable, they would rock. Alas I found myself resorting to using my phone for controls.

When it comes to cheaper true wireless earphones, one of the biggest disadvantages is sound. Driver size and quality is sacrificed to cut costs and increase battery life. Not only that, but Bluetooth isn’t exactly high quality to begin with, so high quality codecs are a must but not always present.

The Outlier Gold feature 5.6mm graphene drivers, a neat and fairly new technology, that actually sound pretty good. The mids and highs are solid, with no significant loss of detail and no harshness to the highest tones. The bass is boosted a bit, but falls short. It’s boomy but not punchy. While warm and pleasant, it can get a little overbearing in some genres, especially poorly mixed ones like heavy metal. The lack of punch also doesn’t give that satisfying feeling in drum and bass and other low-end focused genres.

The sound isn’t exactly exciting, other than the powerful bass, ending up sounding a hair flat compared to more expensive offerings. But in the price range, they sound excellent and definitely better than most. And best of all, they sound surprisingly open and wide.

These drivers are paired with both the Qualcomm aptX and AAC codecs, which means most people wouldn’t be able to hear a quality drop over a wired setup. We’re always happy to see high quality codecs make it into budget earphones. This results in earphones that sound better than a lot of the competition, even the Galaxy Buds.

One issue they face is hiss. They hiss when there’s no sound coming through, but that hiss does go away after a few seconds. It comes back as soon as music starts playing again. It’s a bit louder than that of the $300 MW07s, but the hiss on the MW07s is constant rather than going away.

They also have a feature called Super XFI, which is a software feature that is seen on Creative’s other products. It attempts to make the sound more natural and make it sound like it’s coming from speakers rather than tiny earphones. Basically, it makes the sound more spacious. It’s a bit more limited here because it can only be used through Creative’s app on local content. It sadly won’t work with YouTube or Spotify. 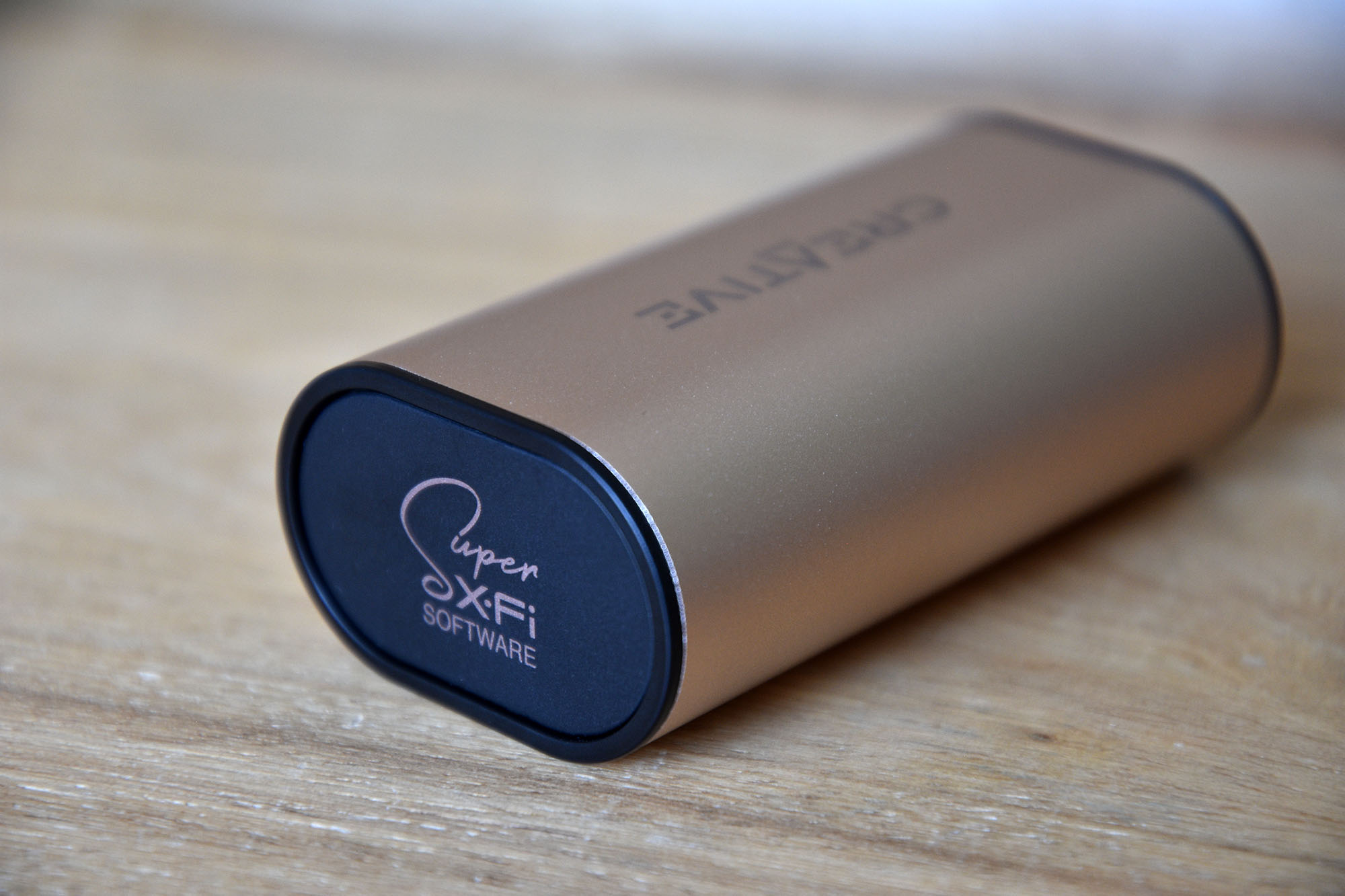 I have to admit, once my ear profile was properly set up via the app, it is a neat feature. First impressions aren’t good, but once your ears and mind adjust, it sounds really nice and turning it off makes you shocked at just how confined and flat your music sounds. SXFI is not the killer feature, and it greatly depends on the genre of music, but it’s a fun feature to play with and definitely enjoyable for local content listening. I just wish it worked with more apps.

Comfort is an interesting subject because not only is it subjective, but there are different types of “comfortable” earphones out there. For me, many earphones are not very comfortable and tend to fall out of my ears. I even use different size tips in each ear sometimes. On the other hand, many earphones also cause pressure build up in my ears which is very uncomfortable. Seeing the deep fit and thin, flimsy tips gave me a cause for concern.

But my worries were in vain, because the Outlier Gold fit great. They go deep into your ear and create a really good seal. This means that noise isolation is above average and bass is strong, but it also does create more discomfort over time than something like the Galaxy Buds, which create a very light seal. Nonetheless, significant pressure is not an issue.

I can wear them for a few hours just fine, but I do need a break after a while due to how deep the tip goes. Nonetheless, comfort is surprisingly good and the earphones are stable as can be. Exercising, running, or even head banging won’t cause them to fall out. All without fins! 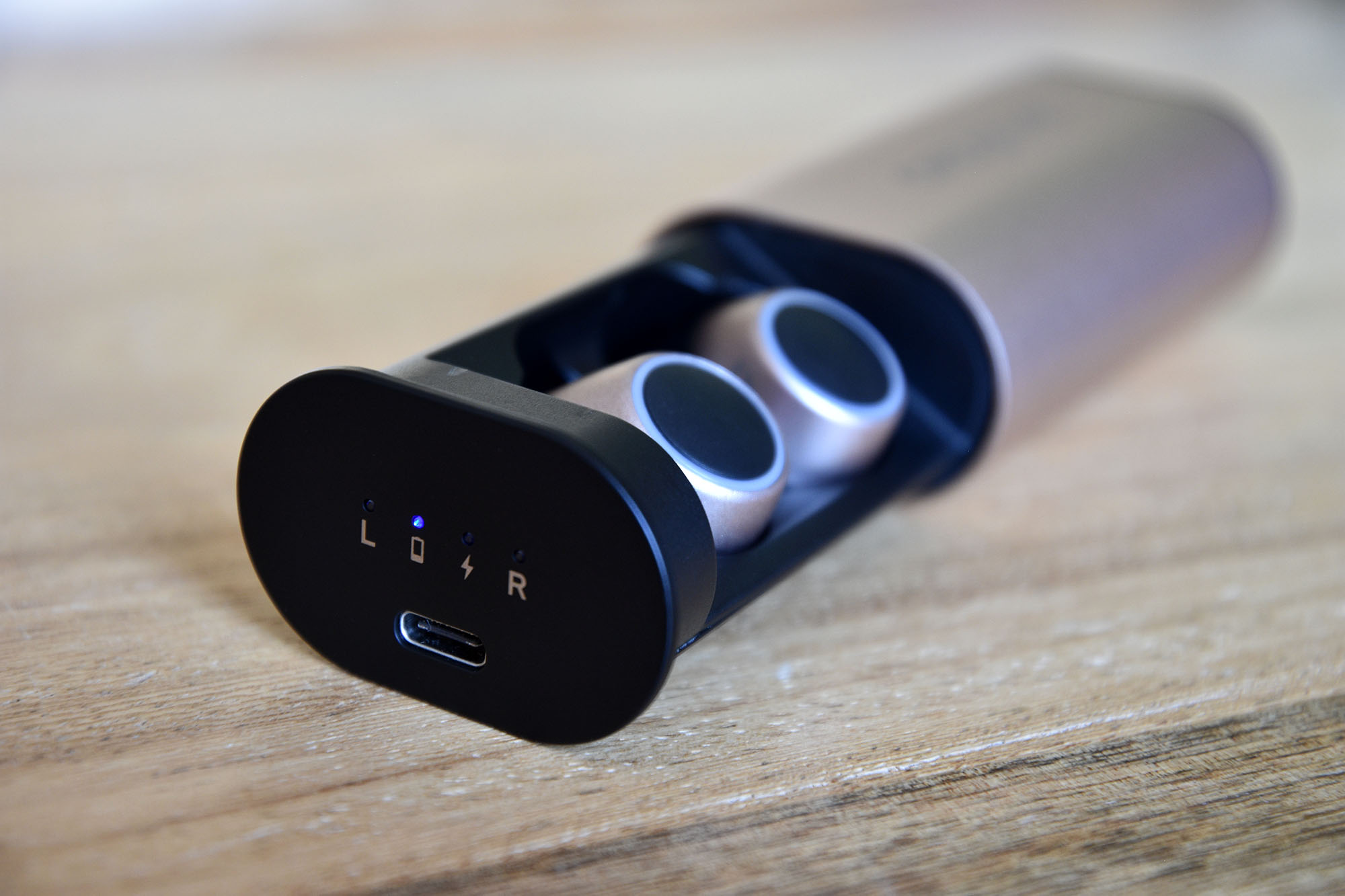 Battery life is a sore spot for true wireless earphones. There’s just not that much room to pack in beefy batteries. This is why we see a majority of earphones hitting 3-4 hours before dying. The Apple AirPods were once the gold standard at 5 hours, and the Samsung Galaxy Buds get 6, but anything more than that is very rare.

Creative got the ball rolling with the Outlier Air, which got a massive 10 hours of battery life per charge. This is without any recharging from the case! The Outlier Gold take this to the next level with 14 hours of charge, more than half a day and most of my waking hours. With the case giving almost two more recharges, totaling 39 hours.

Frankly, wearing earbuds for 14 hours straight is insane to me. This number guarantees that, no matter what you do, you’ll have enough juice for the task. The case holding an extra 25 hours is great too, because even with heavy use you won’t have to charge these often. This is in stark contrast so something like the Galaxy Buds, which trade 2/3 of the total battery life for size.

Connection quality is surprisingly good, as it can be a bit of a downside on true wireless earbuds. A Bluetooth 5.0 connection surely helps here, but antenna design matters most. I had few dropouts and connection issues and it was solid overall.

The way Creative has things set up is that you can set either earphone as the “master” with the other earbud becoming the secondary. This is fantastic in that you can select which one you’d like to use on its own, though this isn’t exactly quick to reconfigure on the fly. Most people will set it once and rock a single earbud in the same ear most of the time anyway.

This is a major downside of the Outlier Gold: There are no features (besides the SXFI audio). There’s no ambient mode, there isn’t even a battery icon in the status bar. That last part is unimportant, since you really don’t need to know how charged the earbuds are when they last this long.

Nonetheless, seeing this total lack of features is just a little disappointing. It can be seen as a positive, as many of these earbud apps aren’t all that good (looking at you, Sennheiser). But one feature in particular is sorely missed, and that’s ambient mode.

You won’t need it at the gym, for which the Outlier earbuds are somewhat made for, but walking through the city or hearing people on the fly without removing an earbud really brings the true wireless earphone experience to the next level. The lack of ambient mode is really the biggest flaw. 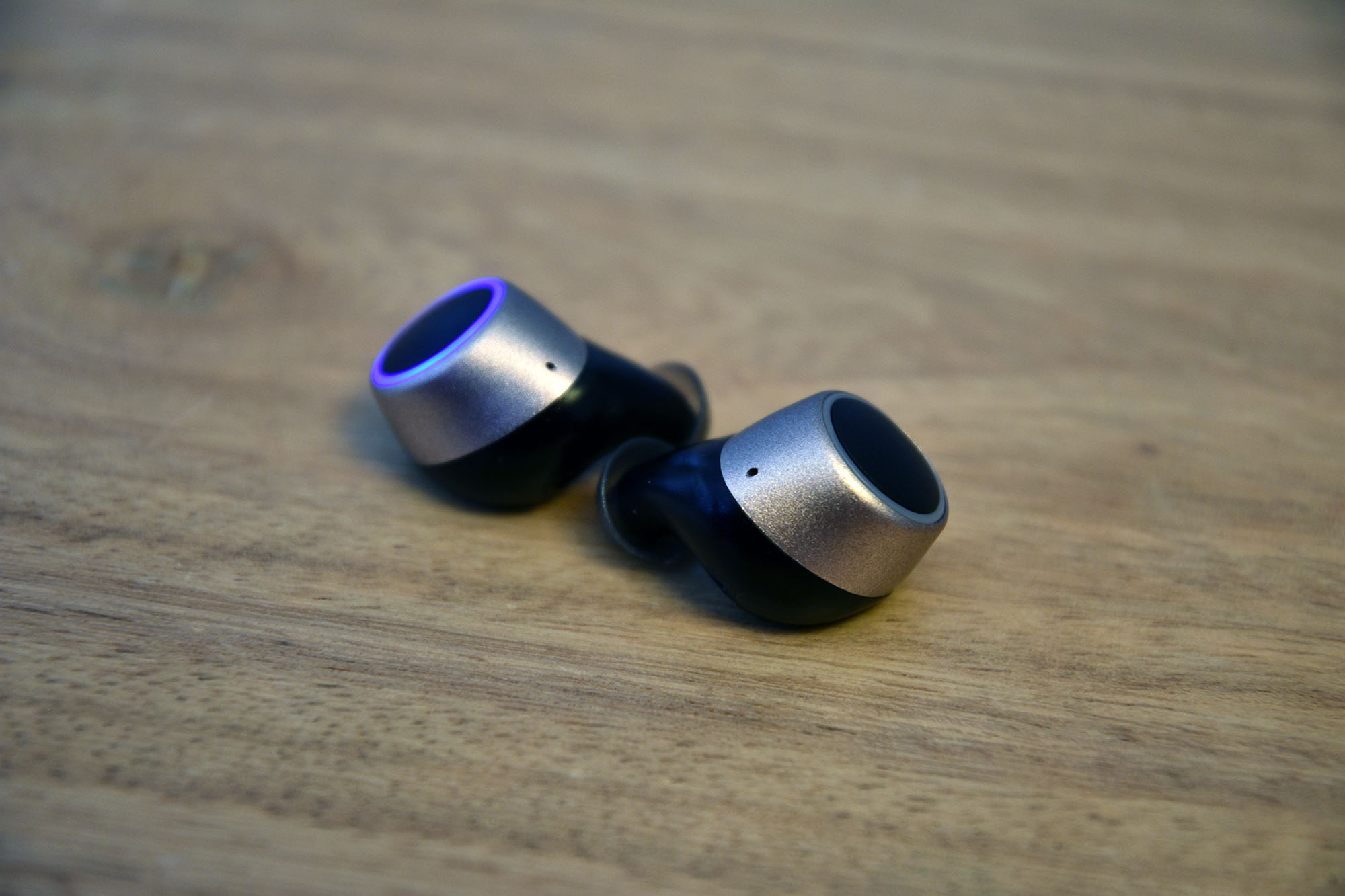 Creative has made a very basic set of true wireless earphones with one goal: Last as long as possible. And they achieved that with an astonishing 14 hours of battery life per charge. I struggled to kill them. But sacrifices weren’t made in audio or build quality, as they both sound good and feel good.

There may not be an ambient mode, and there are a few flaws that keep the Outlier Golds from being perfect. But for under $100, these are some of the best true wireless earphones on the market. The competition doesn’t last nearly as long and even sounds worse much of the time. If you can live without an ambient mode, these earphones should serve you well and sound good doing it. And if you want to save $20, the $79.99 Outlier Air drop the SXFI and the battery life to 10 hours without any other major changes.