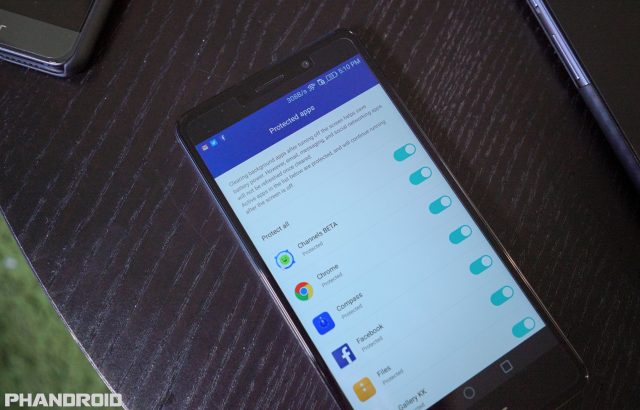 If you’re one of the many people who own a Huawei or Honor branded device — such as the recently released Honor 6X — there’s a good chance it’s currently running Android Marshmallow/EMUI 4.1. The exception to this being the Huawei Mate 9, which is one of the first to run EMUI 5.0 out of the box, but for everyone else, here’s a friendly PSA that your device’s performance is currently being severely handicapped and what you can do it about it.

By default, EMUI 4.1 has a little software feature that kills any and all background apps every time you sleep the display. On the surface this may sound like a good idea but killing off background apps on your device actually does far more harm to the user experience than good. Not only does this further perpetuate the myth that Android is incapable of managing RAM on its own (requiring the help of 3rd party software to function properly), but that this will somehow yield better performance and battery life as a result.

There are the 3 main areas where the user experience is actually hindered — not improved — by EMUI 4.1’s aggressive RAM management:

Don’t worry, you can stop the app killing madness by taking advantage of a EMUI feature called “Protected apps.” This allows you to white list specific apps so that they don’t fall victim to EMUI’s bloody thirsty rampage as soon as the lights go out (i.e., turn off the display). It’s not easy to find and you’ll need to do a little digging, but here’s where you’ll find it:

Although all of your currently installed apps will now be protected, you’ll need to make sure to come back and protect new apps you installed from the Google Play Store. Each. And every. Time. It’s kind of annoying that the “Protect all” settings don’t stick, but this will all be fixed in EMUI 5.0.

Once you’re done, your phone will immediately feel more responsive. This is most noticeable on low to mid range devices where the processor isn’t that speedy and can take a few seconds to open heavy apps or games. Now, whenever you get around to waking your phone, you’ll be able to pick up exactly where you left off inside of apps and games, without missing a beat. For me, it greatly increased my enjoyment using the Honor 6X.

While you’re at it, stop being paranoid about “power intensive apps” 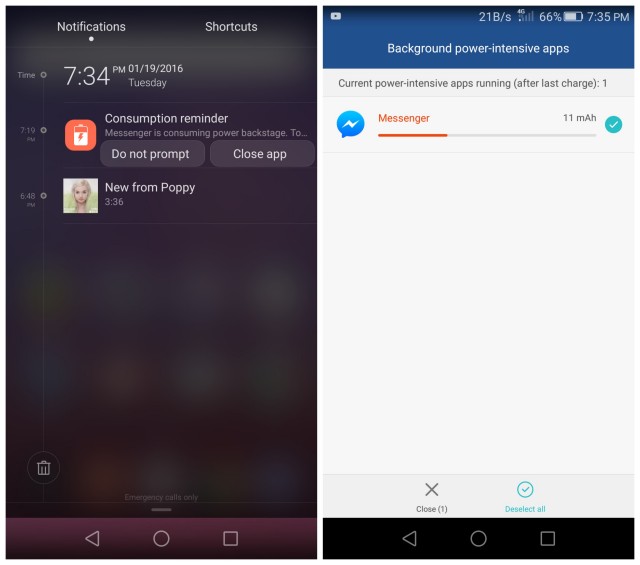 Now that we’ve protected apps from being auto-killed in the background, our work still isn’t over. The other part of the equation is EMUI’s app killing propaganda machine, also known as the Power Intensive Prompt. It’s annoying at best and downright misleading at worst.

The EMUI’s Power Intensive Prompt means well enough by attempting to notify you when it believes an app may have gone rogue and is using “too much power.” The problem is 99% of the time this isn’t even true and almost always has to do with apps you use frequently. The solution? Turn these horrible warnings off and stop being paranoid about all your apps. Here’s how:

The best way to tell if an app is using more battery than it probably should? Just take a look at your battery stats: Settings > Advanced settings > Battery manager > Consumption level. Under the Software drop down, you’ll be presented with a list of all the apps installed on your device (many of them core system apps) along with the percentage of battery they’ve been using. 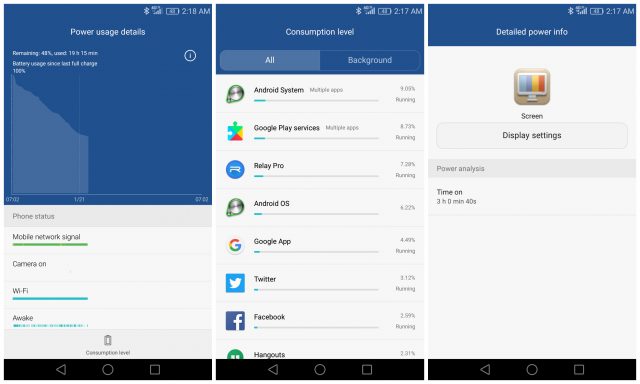 Contrary to what this list tells you, apps open in the background aren’t actually “running” the same way leaving your car running continues consuming gas. They’re actually paused, frozen for whenever you decide to return to them. What you want to keep an eye out for are days when your battery life isn’t quite what it normally is. That’s when you dive into Consumption level to see if there’s a rogue app using too much battery.

For instance, if you see a photo editing app you haven’t used that day topping the consumption list, you may want to consider uninstalling it or just performing a simple reboot to see if that fixes things. On flip side, if it’s an app you frequently use (Facebook or Instagram) don’t be alarmed if you see it at the top of this list — this is normal.

Looking ahead, an updated version of Huawei’s custom software — EMUI 5.0 (Android 7.0 Nougat) — no longer requires you protect all your apps to keep them safe in the background. Seems Huawei finally got the memo and starting in EMUI 5.0, the background app killing feature is finally turned off by default. It’s still there, so you’ll still have the option to enable it for some/all apps should you choose.

So when will your device see EMUI 5.0? Huawei has confirmed that update will be headed soon to the Huawei Mate 8, Huawei P9, Huawei P9 Plus, Huawei P9 Lite, Huawei Nova, and the Huawei Nova Plus before the end of March. As for the Honor 6X, Honor confirmed a rollout during Q2 of this year, so be on the lookout.