Devialet is a French audio company that made a name for itself in the audiophile community for its unique amplifiers. But its real claim to fame is the Phantom: a twenty five pound, egg-shaped speaker that blows the mind of almost everyone who hears it.

This original Phantom uses an aluminum core to create up to 1.2 tons of pressure to emulate a large cabinet size in a small package. With side firing woofers that move like crazy and some serious and interesting tech going on inside, as well as up to 4,500 watts pumping through the high end Gold model, dropping $1,800 up to $3,000 per speaker suddenly makes sense once you hear it.

We reviewed the mid-range Phantom Silver, and we absolutely loved it. There’s nothing like it on the market. But now Devialet has renamed the Phantom to the Phantom Premier and introduced a baby brother to the speaker called the Phantom Reactor. At one quarter the total volume and under two fifths of the weight, it’s one tiny speaker. But it’s Devialet, so you know it won’t disappoint.

The Phantom Reactor closely follows the design of the original Phantom, though it’s much smaller and substantially sleeker. That perfectly round look is replaced with flatter sides, and it’s a solid improvement over the egg-like shape of the previous model. At the very least, it looks more normal. It’s still striking, and while some may disagree, really nice looking.

On the front you’ll find an aluminum full-range driver situated under the flower grill. The ring around it isn’t a driver like on the Phantom; instead of a separate mid-range driver and tweeter, Devialet went for a single full-range driver. On the sides, enveloped by two stainless panels, are the aluminum bass drivers. These are the star of the show, moving like crazy when playing music. 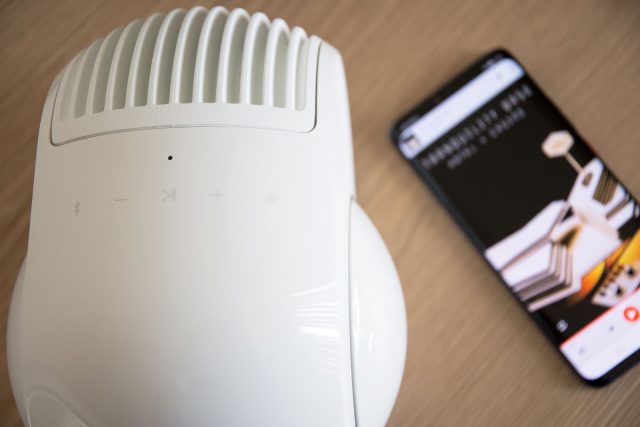 On top you’ll find something new on Devialet speakers: a touch control panel. The Phantom had no controls whatsoever, so this is a welcome change. You can play/pause, change volume, enable Bluetooth, and link to a phone running the Devialet app. 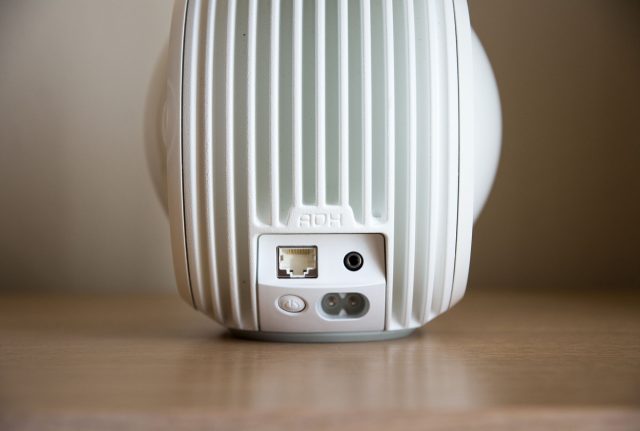 On the back under the heatsink are the ports and a single button. You’ll find an Ethernet port (for a better streaming connection), a combo 3.5mm analog/optical jack, and a power in port. The power button allows you to force the speaker to sleep, but it’s really stiff and squishy. It’s uncharacteristically low quality for Devialet. The good news is that the massive yellow power cable of the full size speaker is gone, replaced with a slim white cable.

Overall the design is awesome, and very heavy. At 10 pounds it’s surprisingly heavy for its size. But all of the materials are solid and, with a $269 Cocoon case, you can even travel with it.

If you’re not willing to drop the $1,350 on the Reactor 900, you can pick up the more budget-friendly Reactor 600 for $1,090. You’ll sacrifice 300W and a bit of sound pressure level, but you’re still getting the same design and same drivers. 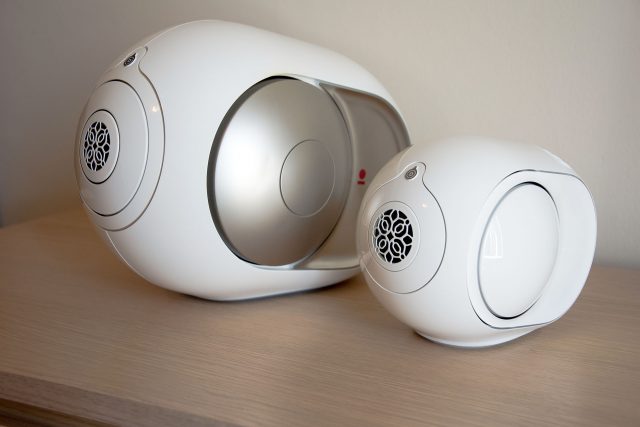 Before we talk about actual audio quality, let’s talk about what Devialet has done to make this speaker stand out. Much like its big brother, it uses an ADH (analog digital hybrid) amplifier. It also creates sound below the human hearing threshold, though not much so. Humans can hear down to 20Hz, and this speaker can produce 18Hz audio. This typically causes the impact and “chills” you feel. And instead of a large cabinet, the Reactor uses a sealed chamber inside to produce large amounts of pressure, simulating cabinet size and creating the “unreasonable sound” Devialet claims out of such a small package.

And the sound is unreasonable! This thing gets wildly loud and creates crazy amounts of bass for its size. The two woofers on the sides move like mad and create a surprising amount of air movement around them. It’s truly a spectacle. The bass is definitely the focus of the Reactor, because nothing in this size can create such a physical impact. Sure a Google Home is bassy, but it’s all superfluous low end. This is the kind of bass that you can feel in your chest.

The highs are incredibly clear and detailed as well, bringing out parts of music you may have not previously heard. It’s not a fancy titanium tweeter, but it’s very competent. And even at full volume (and full volume is very loud), there’s absolutely no distortion. Max volume can easily fill a large room with sound that’s hard to talk over. All this despite not supporting a fancy Bluetooth codec like aptX HD. Where the lack thereof would be very noticeable in headphones, the Reactor doesn’t seem to suffer as much.

The only issue I have with the sound is that it doesn’t feel “full.” It almost sounds like some of the mid-range is subdued. The highs are clear and bright, the bass is sharp and powerful, but in between there isn’t enough. It ends up sounding a bit focused on the highs, contrasting the Phantom Silver’s warm sound signature. It definitely lacks in this department, even compared to cheaper speakers. However, the sound is never harsh or grating. The highs are smooth and easy on the ears even at wild volumes.

I pitted the $1,350 Reactor 900 against the $1,800 Master & Dynamic MA770 and the $2,390 Devialet Phantom Silver (pumping out a whopping 3000W). This is the cheapest of the bunch, but it’s good to see how it stacks up against others in a high price bracket. It is worth mentioning that both are a lot bigger than the Reactor, with the MA770 towering over the Devialet duo.

The Phantom Silver and MA770 both have a much more “full” sound, with every part of the frequency range well represented. This is the case at all volume levels, the MA770 is delightfully warm and full at all times. The MA770 and Reactor are shockingly similar considering the price and size difference, with the MA770 not being all that much louder. Of course the Master & Dynamic speaker has the far superior highs thanks to that titanium tweeter, and even with a measly 100W of power, pumps out a lot more bass at full volume. But the Reactor holds its ground, and even does boomy, distorted bass (like in Billie Eilish’s “ilomilo”) better and more sharply. The Phantom Silver bests both, but it’s definitely in a league of its own.

But I’d argue that the best part about this speaker isn’t the full volume experience. It’s actually the low volume experience that is truly special. With every other speaker on the market, including the beloved MA770, you don’t get much bass until you turn it up. You really have to get a woofer going to create impact. This isn’t the case with the Devialet lineup. No matter the volume, you’re going to get a decent amount of impact. Even at 40%, a reasonable listening volume you can talk over, the sound is sharp and bassy. This makes the Reactor an extraordinary speaker for low volume listening, and it makes it very special in this regard. While the MA770 sounds better full blast, the Reactor definitely sounds better at one third.

All of this testing was done over the typical Bluetooth connection. The speaker does support 24 bit audio over UPnP (Universal Plug and Play), so you can download an app called BubbleUPnP for streaming and you can actually eke out even more sound from this thing. And if you want even better sound, pair two of these together using the app and make yourself a true stereo setup… at double the price. But honestly, you really don’t need it.

My favorite part about the Devialet experience is its handling of the Bluetooth connection. That is, it will not auto connect to your phone as it comes near. A lot of speakers (at least ones that are mainly plugged into a wired source) suffer from this, forcing you to unpair the speaker or get connected to it every time you enter your home. Audioengine bookshelf speakers have this issue, and you simply don’t want to be connected to a Bluetooth device at all times. With the Phantom Reactor (and the bigger Phantom), there is no auto reconnect. You have to head into Bluetooth settings and tap it to reconnect, and that’s just so convenient and forward thinking. 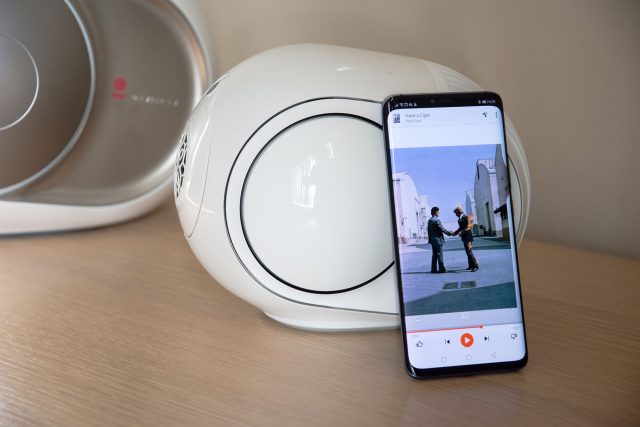 You can use the speaker as a dedicated Bluetooth speaker just by hitting the Bluetooth button at the top, but you’d be doing yourself a disservice. Not only are you skipping out on the software updates available through the app, you’re also streaming music in an inferior way (though it is the easiest way).

The Devialet app is different from the Spark app for the Phantom. Where the Spark app allowed streaming local content via WiFi, as well as advanced controls like multi room setups, this Devialet app lacks WiFi streaming from your phone. However, the app is simple and well designed. You get some basic media controls, a big volume ring around them (and dragging anywhere around this ring adjusts volume rather than being limited to a thin line), and some streaming options at the bottom. You can enable Airplay (if you have Apple products), Spotify Connect, and UPnP streaming.

I do wish the app had more features, like an equalizer or more connections than just Spotify. But Devialet supports its products for a long time, so it’s likely we’ll see more features come in the future via updates. Stereo support is already there, and multi-room support is coming if you want to buy more than one of these things. 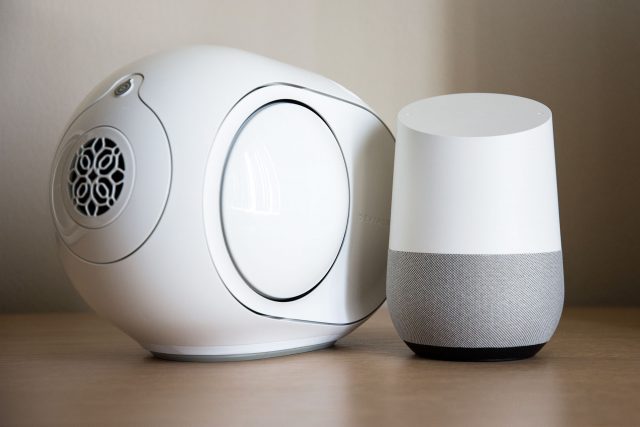 If you’re paying over a thousand dollars for a speaker, you can bet that accessories won’t be cheap. In classic Devialet fashion, the company has released a few accessories both with striking design and crazy pricetags.

The aforementioned Cocoon is a $269 carrying case with a waterproof shell and aluminum handles. It comes in Mercury Grey, Jupiter Orange, and Neptune Blue. Almost $300 is crazy for a carrying case, but with its small size and unique shape (and potentially delicate bass drivers), it’s a cool accessory.

The other accessory is called Legs and is just a 19-inch tall stand with three thin white legs. It’s definitely interesting looking and will cost you $169. 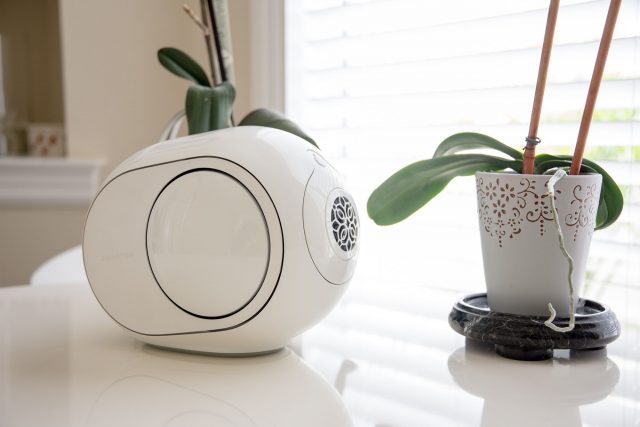 The Devialet Phantom Reactor takes everything good from its massive, expensive brother and brings it into a small form factor. Not only that, but it also does it at a much more affordable price. From the crazy volume to the wild bass, and even the woofer throw show it puts on, this is an incredible home speaker. It never overwhelms you with bass, it sounds amazing at lower volumes, and it’s relatively easy to use.

Place it anywhere in the house, and it won’t take up much more space than two Google Homes. But it’ll sound absolutely amazing and allow you to enjoy your music like it was meant to be enjoyed. This is Devialet’s take on the everyman’s speaker, something the average person can afford. And despite its flaws, they knocked it out of the park.