SteelSeries Stratus Duo controller review: jack of all trades, master of none 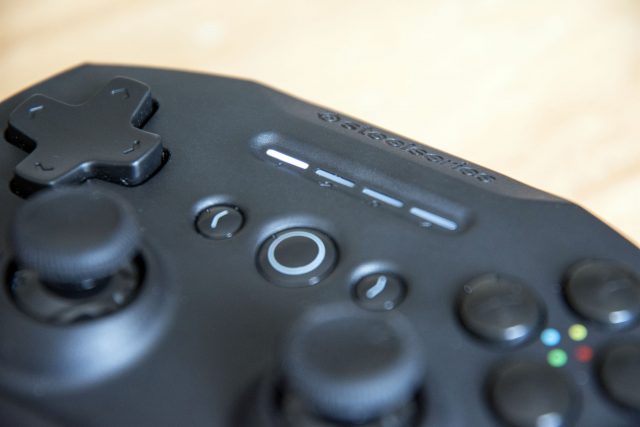 The SteelSeries Stratus Duo has a special trick up its sleeve: It can function both in Bluetooth mode and in 2.4GHz mode with an included USB adapter. Unfortunately, there’s no place to store this adapter while on the go so it’s a hassle to carry and easy to lose. Nonetheless, the added signal strength and reduced latency of 2.4GHz is worth it for those who PC game on the go.

The controller features the traditional PS4 stick layout, with the two sticks on the bottom and a D-pad on the top left, with the Xbox-style ABXY face buttons (even with the same colors marked in the center). Then there are the three center buttons above the stick, and four lights indicating what connected controller you are. 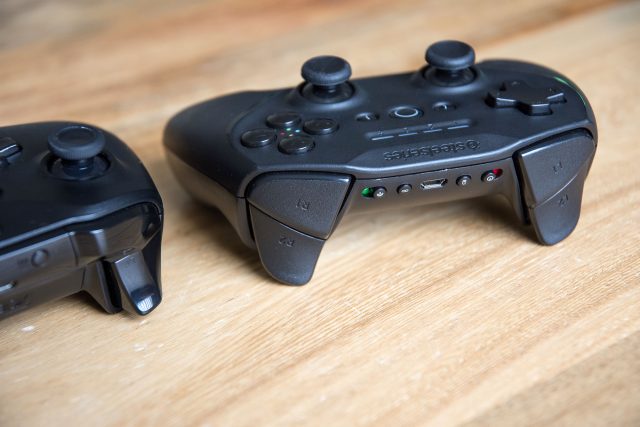 On the back are the bumpers and triggers. The triggers boast hall effect sensors, which are more accurate and more durable than regular trigger sensors according to SteelSeries. There is also a power switch, a switch for Bluetooth or 2.4GHza pair button, a battery life button (pressing this illuminates the four lights on the front to show remaining battery life), and a disappointing microUSB port. The lack of USB-C on accessories is becoming more and more unacceptable by the day, and having to carry around another cable just for your controller is a major bummer. 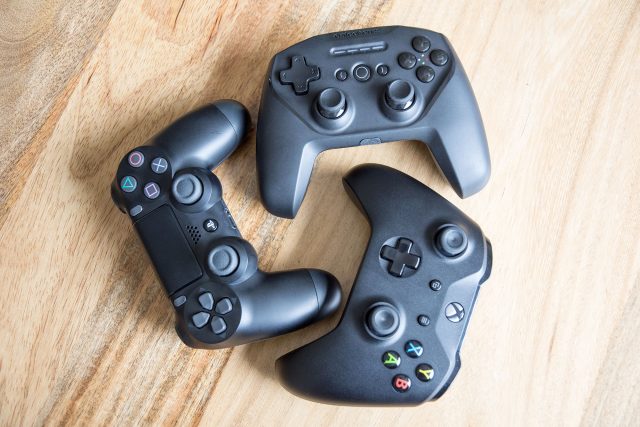 Third-party controllers are often vastly inferior to something like a Microsoft Xbox One controller. However, SteelSeries nailed most of the build quality and design aspects of the Stratus Duo.

The face buttons have a satisfying click and light actuation. They’re not mechanical switches or anything, but they’re good. The sticks feel pretty good and relatively smooth, and though the click down sounds hollow, it feels good. The D-pad is somewhat mushy and inaccurate but it isn’t Xbox 360 bad. Nonetheless, it’s a big step down from an Xbox One or DualShock 4. The three center buttons are sharp and clicky and feel pretty good.

The stars of the show are the bumpers and triggers. Both feel amazing! The bumpers are clicky but have some depth, and the triggers are silky smooth and have a really satisfying muffled thump when they bottom out. They’re very similar to the Xbox One controller, not quite as good but an impressive feat nonetheless.

Overall build quality is great, with no flex or creaks even after disassembly. SteelSeries did a great job building this controller.

The ergonomics of the controller is another thing SteelSeries did a surprisingly good job at. The grip is similar to the Xbox One or Nintendo Switch Pro controller, and it fits great in the hand. I have big hands so controllers like the DualShock 4 are not comfortable. While the Stratus Duo isn’t as comfortable as the god-tier Xbox One controller, it’s so close. The natural grip places all your fingers where they should be without cramping your hands. I wish the grip under the thumb was a bit taller but that might negatively affect people with smaller hands.

When it comes to weight, the Stratus Duo sits right between the 210g DualShock 4 and 281g Xbox One controller at 245g. It’s relatively lightweight, but there are weights inside to keep the feeling substantial. These weights can be removed, though it might make the controller too front heavy.

One major issue with ergonomics I have is the three center buttons (start, select, and the “home” button). They’re practically unreachable because they’re perfectly hidden behind the sticks. You have to reach over the sticks, and you will hit them. It’s uncomfortable and very annoying to pause the game. They should have been higher up.

This controller packs a few interesting features but is missing a major one. The Stratus Duo doesn’t require special drivers on Windows, Android, Oculus Go, and Samsung Gear VR both via Bluetooth and 2.4GHz. It also features Steam support, allowing you to use Big Picture and play every supported game with no setup. It also supports the Steam Link if you have one. No matter what device you use, setup is easy. It also advertises Fortnite Mobile support in particular, which is a great way to get a competitive edge against touchscreen gamers. Unfortunately, there is no Nintendo Switch support so this isn’t your new Switch Pro controller replacement.

The major omission here is rumble motors. At $60, it’s just as expensive as the Xbox One controller but lacks this critical feature. While cheaper controllers often omit rumble, a pricey controller such as this has no excuse.

A charge is provided by the internal lithium-ion battery that can provide 14 hours of charge via Bluetooth and 42 via 2.4GHz according to the box. The site says 20+ hours of battery life. You can also use it while charging via the microUSB cable.

Putting hours into a game yielded no hit on the battery life indicators over 2.4GHz. Compared to a DualShock 4, the battery life is very impressive. While some may prefer the AAs of the Xbox One controller (and the lovely ability to hot-swap Eneloops), having a built-in battery is preferable for travel. 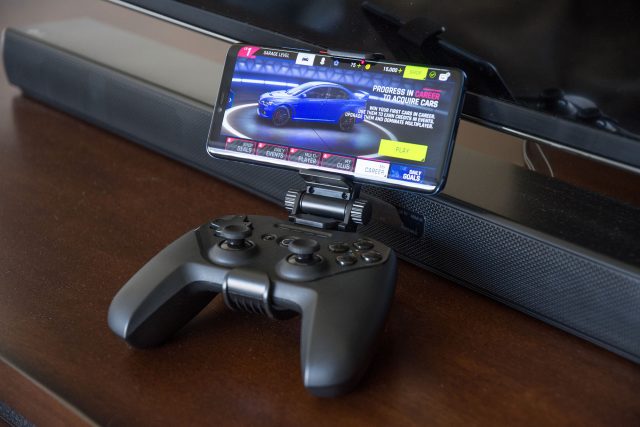 There’s also the optional SteelSeries SmartGrip. It’s a $10 accessory that allows you to clip a phone onto your controller. This is critical for mobile gaming, but the accessory is shockingly mediocre. First of all, it covers the power switch and pair button, so you’ll have to get the pairing done before putting the contraption together. YOu also have to remove the clip every time you want to turn the controller on which is a huge pain. Then there’s the tension clip to secure it, which feels cheap. And lastly, it doesn’t have any way to automatically center on the controller so you have to attach it carefully. 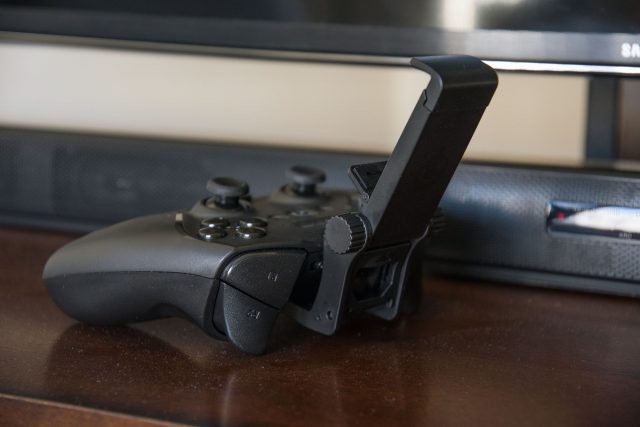 Thankfully, it does hold the phone well. It just feels a bit like a cheap eBay special rather than a quality SteelSeries piece and sharply contrasts the controller’s build quality. Not to mention, with the controller costing $60 and missing rumble, it really should have been included.

The SteelSeries Stratus Duo is a solid controller, nailing build quality and ergonomics and hanging with the big boys. The Xbox One S controller may be the best controller on the market, but the Stratus Duo isn’t far behind.

However, it’s a bit hard to recommend. It lacks rumble, it has some small ergonomics issues, and the D-pad just isn’t very good. The Xbox One S controller goes for $60 MSRP, though you can generally pick them up for much cheaper online. If you want it strictly for mobile, an Xbox controller is cheaper. If you want PC gaming with 2.4GHz,  the optional USB dongle will cost you a bit extra but the price difference remains pretty small. The DualShock 4 is pretty cheap online too, undercutting the Stratus Duo and also offering Bluetooth support (though earlier models of the DualShock 4 have serious input lag on Android). There is no 2.4GHz here, and the ergonomics and build quality are far inferior to SteelSeries’ great design, but it’s still a cheaper option.

If you want to pick one up, it’s a great choice. It might even be the superior choice for travel (and that’s what Google Stadia and Project xCloud are all about). Personally, I’d rather stick with an Xbox One controller. 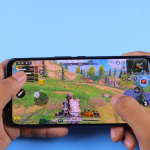 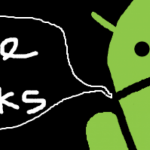 6 genres Android has conquered and their best 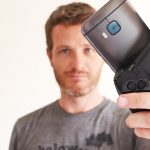 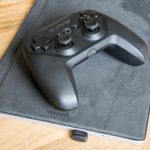 A teardown of the Samsung Galaxy Z Flip proves that the display does have glass under the plastic. And the rest of the internals are just as interesting.