Samsung took the wraps off the much-leaked Galaxy S10 and S10+ at Unpacked a few days ago and the world has had time to digest and form opinions on the devices. Depending on your region, the S10 and S10+ come with either Samsung’s own Exynos 9820 chipset developed in-house, or the brand new Snapdragon 855.

As with any new device release, to get an idea of its performance and how it fairs against other smartphones, a series of benchmark tests are performed. GSMArena put the S10 and its 8nm LPP node Exynos 9820 Octa-core processor through its paces to see how it compared. The S10 has two M4 cores clocked at 2.7GHz and two Cortex-A75 2.4Ghz cores, with four power-efficient Cortex-A55 1.9Ghz cores. Samsung has utilized the DinamIQ architecture by ARM, which allows different types of cores to run simultaneously to boost performance and efficiency. The Exynos 9820’s GPU is a Mali-G76 MP12, which Samsung says can provide Unreal Engine game optimization for some added gaming performance.

So what do all these numbers actually mean? While benchmarks aren’t a great way to subjectively analyze how the device will perform in the real world, it does provide a level playing field to compare devices. 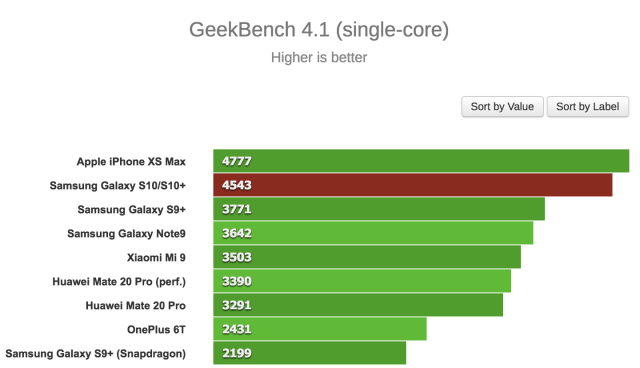 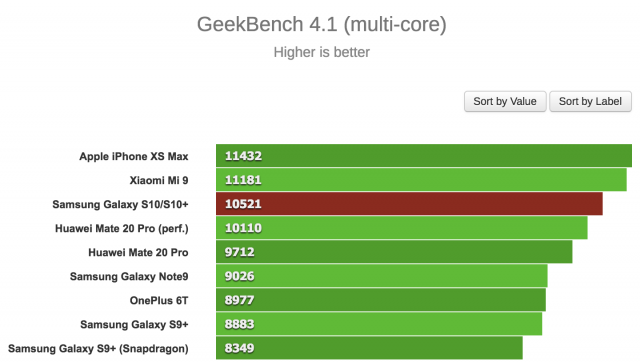 The S10 achieved a benchmark score of 4543 for single-core and 10521 for multi-core, falling short of the iPhone XS Max on both occasions. The AnTuTu benchmark is a similar story, showing the S10 achieves a score slightly lower than its Apple competitor. 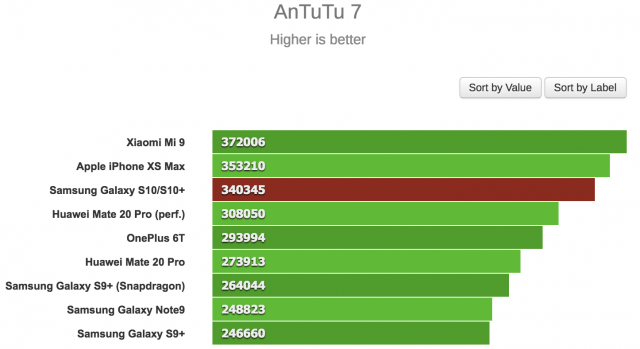 As mentioned earlier, benchmarks do not tell the whole story, and even more so with the different resource demands between iOS and Android doesn’t necessarily mean a higher score translates to a better experience, but it does give an idea of where the Exynos 9820 falls in terms of raw performance.

Putting aside the iPhone XS Max, the new Exynos 9820 is one of the best in class amongst Andriod devices when it comes performance according to the benchmarks, showing it is a big step over the previous Galaxy S9 and Note 9.