First impressions: The Google Pixel could be the Nexus 5P I’ve been waiting for [VIDEO]

It’s been awhile since we’ve seen a worthy successor to the Nexus 5. It was the “tiny” Nexus that offered a beautiful mix of hardware at an attractive (and more importantly), reasonable price. The phone will forever hold a soft spot in my heart as the best Nexus device Google ever offered. It was fast, small, and didn’t break the bank. That’s not to say the phone was perfect. Compromises had to be made to keep that lower price point and as a result, the Nexus 5 was a plastic phone that featured a sub par camera and lack luster battery life.

With last year’s Nexus 5X, we saw Google finally throwing Android fans a bone, those who have been craving a worthy 5-inch followup they could easily use with one hand. The 5X seemingly gave us everything we asked for — only it didn’t. The hardware was mid-range, build quality was cheap, and the price tag was much higher than we expected for something billed as a smaller, more affordable option to the Nexus 6P. It was beginning to sound like Google would never again offer a worthy, high-end, followup to the Nexus 5 — and a true 4.7-inch iPhone competitor — that fans were really clamoring for. Well, this fan anyway. Enter the Google Pixel.

Yesterday Google officially took the wraps off their new line of handsets, which — according to Google — was built entirely by them. Of course, we all know the phone was technically built by HTC according to Google’s specifications, giving the search giant complete control over the premium hardware sourced they claim was sourced “from multiple partners.”

I got the chance to go hands-on with the Pixel and after spending a short amount of time with the device, here are some of my first impressions.

What I loved about the Pixel 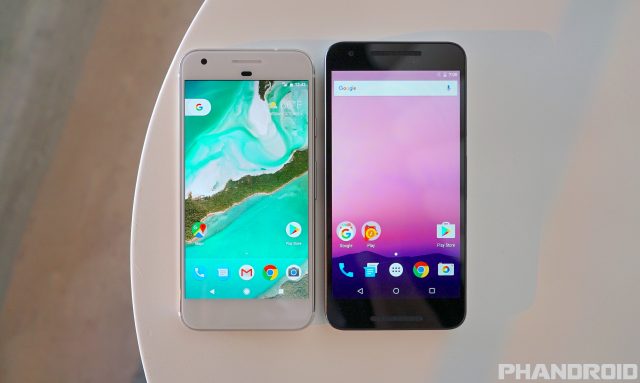 The Pixel phone is small – Last year I was cursing the Google gods that they didn’t release a Nexus 5P for small, premium phone lovers. Even though the Nexus 5X was pretty much awful, that’s not to say there weren’t other good Android options at this size (the HTC 10 and Galaxy S7 are both great). Unfortunately for those wanting an uncompromised Android experience with updates straight from Google — you were assed out. Again.

The 1080p display is just what the doctor ordered – While it may not be best suited for VR, the 1080p display on the regular-sized Pixel is perfect at 5 inches. Having a lower — but still plenty crisp — resolution display will be less taxing on the processor. Couple this with the power savings of AMOLED and you’re looking at potentially great battery life, even from the phone’s somewhat disappointing 2,770mAh battery. In theory, anyway.

It’s fast, really fast – We’ve gotten to the point where nearly every smartphone released these days is going to be snappy and responsive. Unfortunately, this was far from the case with last year’s Nexus 5X. I even had some issues with touch screen latency on the HTC 10 and constant apps reloading on the Galaxy S7. Thankfully, the Pixel I got to play around with was incredibly responsive to the touch, and super snappy with opening apps. You know, when it wasn’t freezing on me (the pains of early hardware/software).

Seamless Android updates straight from Google – The Pixel will be one of the first phones to offer seamless updates straight from Google. Like Nexus devices before it, it’s hard to put a value on not having to wait months — even years — for the major Android updates to hit your device. The best part is these updates will take place entirely in the background, without you having to do a thing on your end (aside from performing a quick reboot).

24/7 tech support from Google – The Pixel features a separate tab in the Settings app focused entirely on tech support. Users can call, chat, or share their screen to get help with their device no matter where they’re at. Although nobody can match the convenience of being able to walk into a brick and mortar store and receiving help in-person with your device, Google could be getting close.

The camera is top notch – In our brief time with the Pixel, the camera hardware and software was top notch. I feel like every smartphone camera has its own unique “signature” or look to it. DxOMark’s rating aside, the Pixel was seemingly on par with the iPhone 7, which is really saying something. I will note, I only got to play around with the Pixel camera inside of Google’s venue and will need to test it out in more challenging lighting situations to make a final verdict. But in our quick comparison test, it seems Google nailed it.

The small Pixel is just as good as the big Pixel – With the exception of a smaller battery, the regular-sized Pixel is every bit as good as the Pixel XL. With last year’s Nexus 5X being a severely handicapped version of the Nexus 6P, I was worried the regular sized Pixel would feature subpar hardware like a lower-end processor or less RAM. This is not the case. 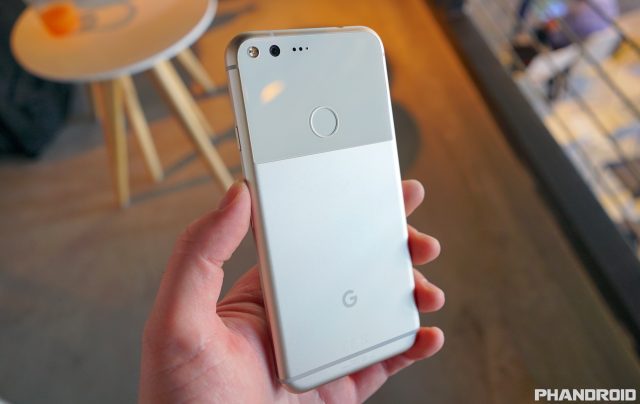 Build quality didn’t feel all that premium – Okay, so the Pixel features a metal unibody design typical on most high-end smartphones these days. I’m not sure if it was the weight (the Pixel is deceptively light), or the type of metal used on the phone, but the Pixel felt more like those cheap Chinese smartphones with aluminum builds — not the premium metal alloy used on Samsung’s Galaxy S7/Note 7, or the iPhone. Even the HTC 10 felt more solid (which again, could be a weight thing), but I’d be lying if I said the phone felt premium just because Google wrapped some tin foil around it.

It’s thicker than a Snicker – The Pixel is thick little smartphone, a good 8.58mm at the top. While it’s far from huge, when compared against the iPhone 7 (7.1mm) and the Galaxy S7 (7.9mm), you’ll understand why the Pixel doesn’t have an unsightly camera hump. Unfortunately, it doesn’t appear Google (or HTC) put the Pixel’s added thickness to good use as the battery is still quite small, weighing in at only 2,770mAh. While mAh doesn’t always translate to better battery life, it would have been nice to see them making the effort to at least squeeze a 3,000mAh battery in there. If the Galaxy S7 could do it, so can the Pixel.

The size of the bottom bezel is ridiculous – Critics have been giving the Pixel a lot of sh*t about this since the phones were first leaked. I was holding off until the event to see if there was some sort of significance to having such a large bottom bezel (perhaps the option to use capacitive keys or something), but nope. All that wasted space on the bottom is just because. It’s easy to see how Google could have made better use of that space with a front facing speaker, Quad DAC, or extra big battery. Instead, it appears the sole reason for the extra large bezel is to merely make the phone look more like an iPhone.

Fingerprint sensor on the back -This, of course is subjective, but a good case could made for using a front mounted fingerprint sensor. For one, it would make use of that wasted space beneath the display, and two, you could easily unlock your phone without having to pick it up off a desk or table.

There’s no 64GB model – While everybody has different needs when it comes to storage on their smartphone, it was nice to see Google not wasting time with a 16GB model. That being said, Google also made the odd decision to omit a 64GB model, instead offering only 32GB and 128GB storage configurations — WTF? I get it, cloud storage makes 32GB a little more feasible, if you’re planning on using the phone for the next two years, 64GB would have been ideal. 128GB is not only excessive, but costs an extra $100 on an already expensive smartphone.

It’s expensive as hell – You’d think that by making their own smartphone, having greater control over the hardware on the Pixel would see something a little more competitively priced. Not the case. Instead what you get is a smartphone that’s just as expensive as the iPhone 7 or current Galaxy smartphones, only offering a little bit less when it comes to raw features. There’s no water proofing, the battery is smaller, it’s not all that premium feeling — exactly where’s the value here?

Let’s be real. The Pixel is still the best option for those wanting a top-of-the-line, pure Android experience with constant updates directly from Google. It’s the new Nexus and for the first time in a long time, it’s one you aren’t forced to use with two hands. To me, this is the Pixel’s biggest draw. Whether it will be the mainstream hit Google wants it to be remains to be seen, but those that still look back on the Nexus 5 with rose tinted glasses will find the high-end hardware of the Pixel irresistible.