With Google seemingly going all-in on “Pixel” for 2016, we’d assumed the Nexus line was dead. That belief fostered deep down inside of us early on due to long-time rumors that Google was looking to move on from the brand.

But one person — 9to5 Google’s Stephen Hall — says “Nexus isn’t dead” in his latest tweet. It was intentionally vague, and when called on for clarification by someone querying about whether he’s referring to a rebrand to Pixel, he says it’s “literally not dead,” and further commented that Google’s Pixel line is a nice distraction from Nexus. 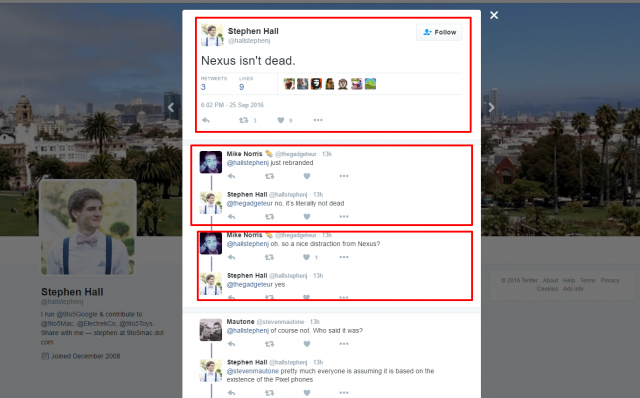 Unfortunately, that’s all we know. His words would seem to imply that Google has a new Nexus device in the works. We’re not sure if it’d be announced at the upcoming October 4th event, but Huawei’s 7-inch tablet could very well make itself part of the Nexus family instead of Pixel. Or perhaps it’s something else entirely.

We never thought it odd that Google launched a new “purity” brand with the debut of the Chromebook Pixel, but that’s because the Chromebook was a, well, Chrome device. Then Google dished out the Pixel C, which is the newest Android tablet to spawn from their own labs. That, coupled with the rumors of HTC’s phones being branded Pixel, made it seem almost inevitable that Google was slowly penciling the doom of the Nexus line into their calendar.

And now we’re just plain confused. What’s a Nexus device and what’s a Pixel device in 2016? Are they discernible by price? Quality? Software philosophy? That’s an answer Google will have to provide once they reveal their plans for the future, and we’re hoping the bulk of that answer will arrive next week.