Samsung’s always looking to the “Next Big Thing” and while that mostly has to do with bigger and better smartphones, the South Korean company has their hands in just about everything these days. Home appliances, VR, mobile payments — hell, even smart bikes — it’s in the company’s smartwatch line that we could see the next big evolution in wearables.

While manufacturers are convinced wearables still have huge growth potential, the biggest hurdle they face is that, at least in their current state, devices like smartwatches offer little value to consumers, often times seen as little more than fitness trackers that just so happen to also tell time. For devices like the Apple Watch, Apple took the kitchen sink approach, treating the watch almost like a full fledged smartphone just with a display too tiny to comfortably interact with. To remedy this, Apple included the “Digital Crown,” a dial on the side of the watch that makes it easier to perform more precise actions like zooming and scrolling around the UI. 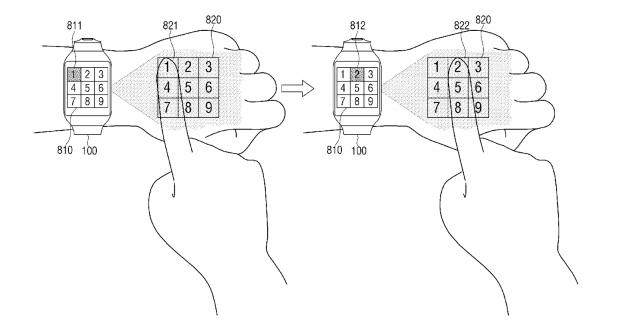 But Samsung is looking beyond that. In a freshly uncovered patent (originally filed November 3rd, 2014), it seems Samsung has a few ideas on how they could tackle cramped smartwatch displays. The patent describes a “wearable device and control method thereof” that seems more geared to the “virtual user interface” — which is projected onto the user’s arm or even nearby objects — than the hardware itself. The projected image can then be interacted with, similar to those laser keyboards you’d find in SkyMall or YouTuber’s “Top 10 Coolest Gadgets” lists.

Here’s the description as Samsung tells it: 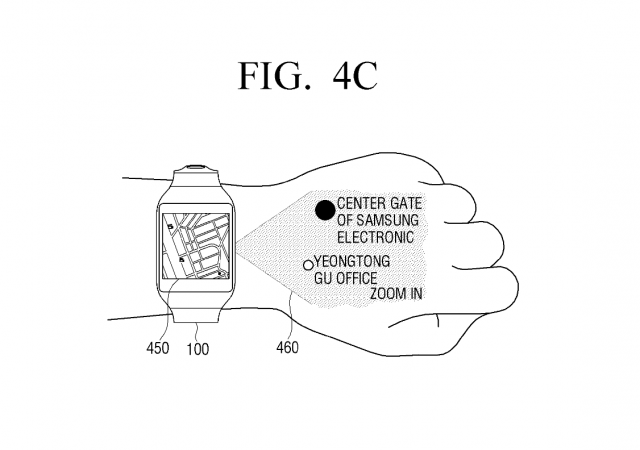 Included in the filing are a number of images and diagrams detailing exactly what Samsung has in mind. Keyboards are obvious, but the projected image could be used to display secondary information, almost like a larger secondary display. For instance, if your smartwatch is displaying a map, the projector would beam out information about landmarks or businesses, that sorta thing. The cool part is the smartwatch would not only be able to detect taps, but gestures like handwriting. 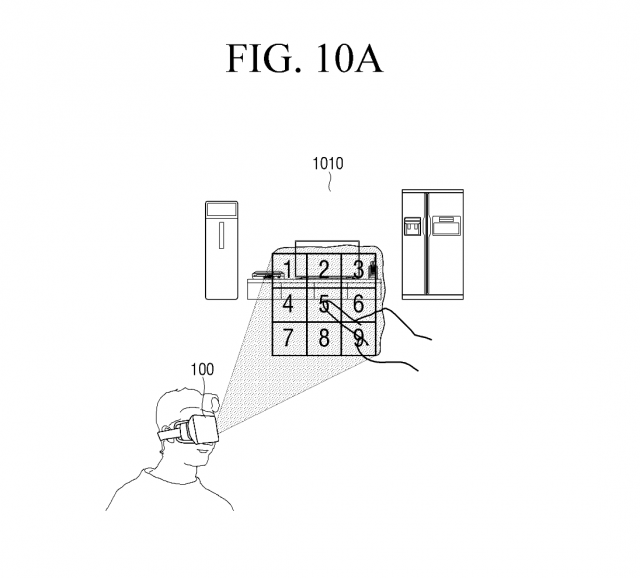 The patent goes on to describe other devices outside the smartwatch that could also utilize this virtual UI,  notably a VR headset. The “head mounted display” device would then display augmented reality images by detecting real world objects (think Microsoft’s HoloLens). The user could then, as described in the patent, use gestures to manipulate objects, the UI, or perform various actions with the headset tracking the user’s movements. Whether that’s putting a virtual doll on the couch, or enlarging a virtual TV, it’s all covered.

Now, of course we know that patents like these may never see the light of day, more than often giving us little more than a sneak peek into the creative minds of who filed it. In the case of Samsung, they’ve had some pretty wild ideas in the past, things like a foldable smartwatch, smartphones with interchangable camera modules, contact lenses with cameras built in, and an augmented reality keyboards. For a better look at what Samsung has mind for their virtual UI for wearables, check out the diagrams down below. 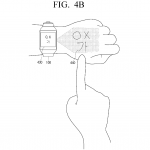 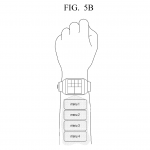 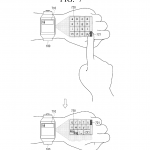 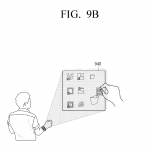 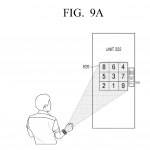 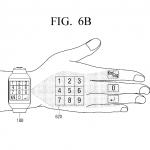