LG today officially revealed the LG V10, the dual-display smartphone they’ve been teasing for a little while now. The display is a small ticker-like implementation above the main display, which is a setup not at all unlike the Samsung Continuum from way back when. 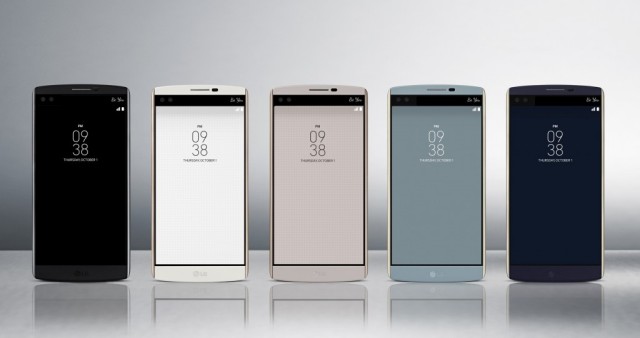 Thankfully it doesn’t appear the LG V10 will fall victim to the same circumstances that doomed that phone (lackluster specs and lack of availability). The secondary display can be used for quick looks at weather, time, date and battery status while the display is off. While it’s on, it acts as a dedicated apps launcher, and during video playback or games it’ll notify you when a call or text comes in so as to not interrupt you with a popup notification on the main display.

Another neat feature we haven’t seen on my other phones in the past? Dual front-facing cameras. We’ve seen that on the rear of some phones, but not the front. The purpose of the two cameras (5 megapixels each) is to provide both the standard 80-degree view we used to have, as well as the 120-degree wide angle view that has become standard in most other phones. To achieve this, the software uses an algorithm that takes two separate images and stitches them together to help achieve whichever exact angle you want. Neato.

That said, there is still a lot to get excited for with the rear camera, which is a 16MP shooter similar to the one found in the LG G4. LG has included manual mode for video recording, which is another first for a smartphone. It allows you to change aspect ratios (16:9 or 21:9 cinematic), resolutions (HD, FHD or UHD) and more:

LG didn’t have much pricing info to dish out, but we do know where it’ll be headed. South Korea will get it first, naturally, but we’ll also see it in the United States, China and key countries in Asia, Latin America and the Middle East by year’s end. LG says more markets will be added to the list in due time, so we’ll have to wait for further announcements to see which other areas will get it.