HTC Sense Home brings themes, intelligent widget, and more to the One M8/M7 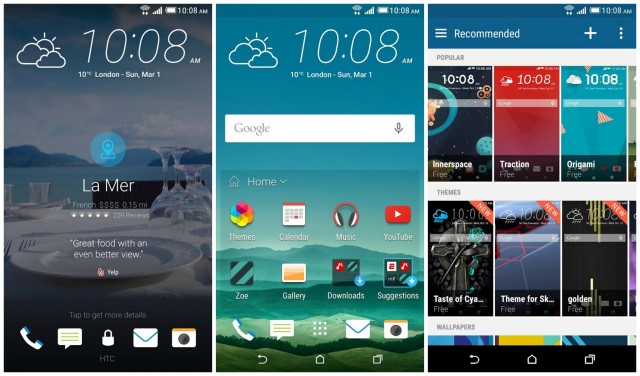 It’s not Sense 7, but HTC is bringing HTC One M8 and M7 owners a taste of some of the new features touted in the HTC One M9. By updating their BlinkFeed app in the Google Play Store — now officially renamed “HTC Sense Home” — HTC is giving the One M8/M7 on Lollipop the ability to apply a handful of themes we took a look at on the One M9.

Not every theme is available, as some require Sense 7 to function, but there’s enough here that it should wet your appetite until a future software update arrives. But you can get started building your own themes on-the-go, even publishing your favorites for others to download, or following your favorite designers. We also recently told you about HTC’s online tool for building your own themes, so you can check that out as well right here.

Aside from themes, HTC’s Sense Home Widget has also been added. Sense Home Widget is a little folder that intelligently delivers commonly used applications based on your location. It even offers suggestions for apps you haven’t downloaded yet.

HTC BlinkFeed has also been updated (One M9/M8/M7), now pulling in Tumblr feeds if you’d like. Oh, and as Android Forums member SolApathy points out, if you don’t like using the stock HTC launcher (Sense Home) but enjoy BlinkFeed, you can create a custom shortcut to quickly access BlinkFeed in most 3rd party launchers. For more details, head to his post right here.

The lock screen has also received some small, Sense 7 like UI tweaks with a different font style and weather widget that mirrors the HTC One M9. All in all a pretty substantial update, one we didn’t see coming. This, foks, is why HTC threw their system apps on the Play Store: no need to wait around for full system updates to enjoy great new software features.

For the HTC One M9, HTC One M8, and HTC One (M7), you can update via the Google Play Store link down below.

Thanks for the M7 confirmation, Ben!