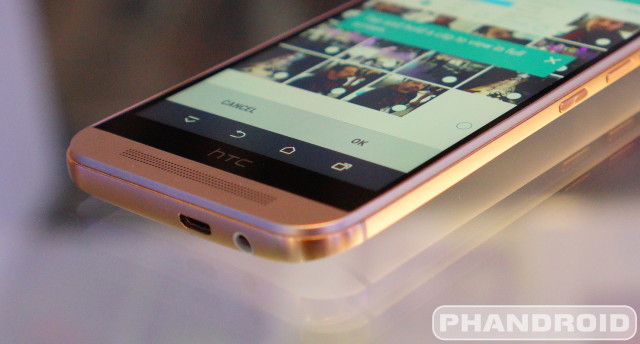 We’ve got to spend a lot of time with the HTC One M9 these past few days. During this time, we’ve been exploring all the ins and outs of its new software, HTC’s new and improved Sense 7. One of the more noteworthy new features (we already showed you guys every single new theme) we found was the new custom navigation bar.

Now, on most Android devices you have the typical Android software buttons — back, home, and recents — that rest along the bottom of the screen. For Sense 7 update, HTC is finally putting those software buttons to good use by giving users the ability to customize, not only their placement, but squeeze an extra button in the nav bar as well.

The function of this extra button can be changed to a few options: turn off screen, auto rotate, notifications, or (our personal favorite) hide the navigation bar completely. We know what you’re thinking, if the navigation bar is hidden, how will you navigate around the UI? Easy. Simply swipe up from the bottom HTC black bezel bar (see, it does have a function) and it reappears again.

Also worth pointing out is how great the “turn off screen” and “notifications” button could be for those with smaller hands who have difficulty reaching the notification drawer or power button on their device. The best part, once Sense 7 begins rolling out to older devices — like the HTC One M8 where the physical power button was tough to reach even for us — you should have no problem at all using the phone 1-handed.

Apparently this feature can also be found on the LG G3, even if HTC believes hiding the nav bar is a never-before-seen feature exclusive to the One M9. You can take a look at the new custom nav bar in our video down below.

Update: A previous version of this post incorrectly stated this feature was exclusive to the One M9. We’ve since updated the post to include the LG G3 as well.