The all-new Moto G was announced in the wee hours of the morning and went on sale almost instantly via Motorola and carrier partners. While early adopters await the shipment of their new smartphone, we already have one in our hands. We cut to the chase and unboxed this bad boy to save you the suspense.

The Moto G is updated for 2014 with a larger display, jumping from 4.5 inches to 5 inches even. While the final display size isn’t equal, the increase in size is equal to bigger display of the new Moto X announced alongside the G. Unlike the Moto X, which saw an increase to 1080p resolution, the Moto G remains a 720p handset.

Apart from the display, the hardware of the phone is a mixed bag of premium and mid-tier specs. Moto wanted to get as close to a premium experience for the Moto G’s budget price as possible, but obviously some concessions were made. You get Snapdragon 400 quad-core processing, 1GB RAM, and an 8MP camera. The battery offers up to 24 hours of use with 2070mAh worth of charge.

The size of the phone is the biggest change you will notice when first freeing the new Moto G from its cardboard packaging. In most other regards, the new edition retains the same overall design of its predecessor. The construction quality is similar in that regard, as well. Whereas the new Moto X moves into the realm of aluminum construction and accents, the Moto G remain all plastic. It’s a solid plastic build (just like the last generation G and X), however. 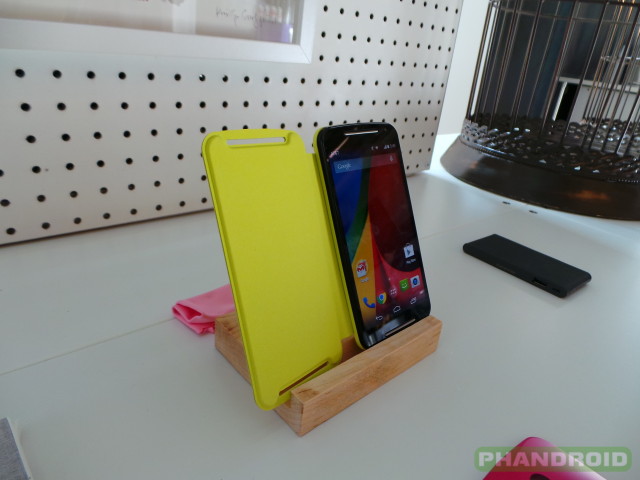 The Moto G has never offered the customization options available to the Moto X, but Motorola once again offers a removable backplate and a variety of replacement options to add your own personal flavor to the phone. This time around we are also getting some folio-style replacements that offer an added layer of screen protection.

All in all, this is a solid upgrade to what has become one of Motorola’s best selling smartphones. The design and build feels like a phone that could easily cost twice as much, and the specs, though nothing spectacular, leave little room for complaint. Where the Moto G really wins is its price. The phone is available without a contract for $179. If concessions needed to be made to reach that mark, Motorola has done an excellent job in accomplishing the task.