Madden NFL Mobile review: the best of Ultimate Team right in your pocket 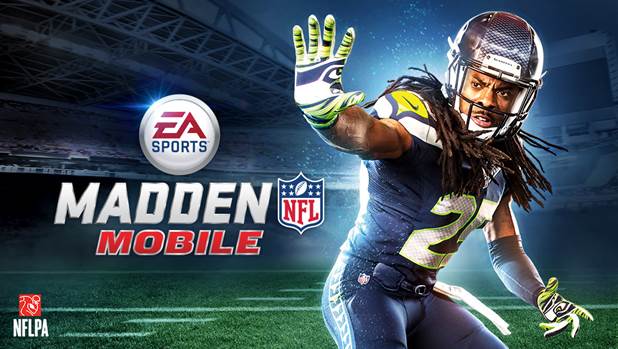 Many football gamers have likely already drain hours of their time into Madden NFL 15 for consoles as it launched this past Tuesday. But what about when you’re away from and needing that football fix? EA Sports has a pretty decent gift for you lot — Madden NFL Mobile. We’ve had a few days to sink our teeth into it and determine whether this is the pigskin simulator that your phone or tablet deserves, and here’s our final review.

While graphics have never been the absolute most important element of video games, you don’t want a football game made in 2014 to look like Tecmo Bowl. How does Madden fare? Quite well, I must say. EA spared no expense when it comes to resources, as they draw on every ounce of power that today’s powerful mobile GPUs provide. While you certainly won’t be getting console quality graphics here, the game looks and performs smooth enough to make you believe you’re on the field. 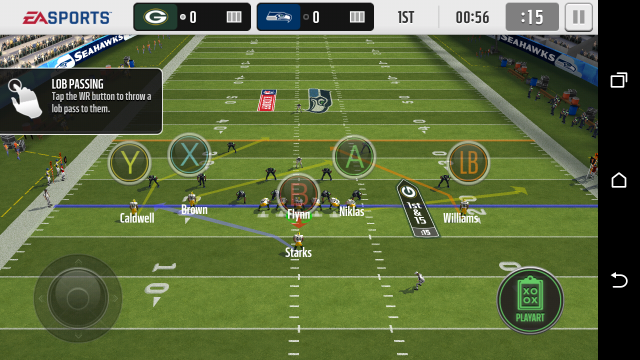 Player models are perhaps most important, and they are given proper justice here. You might not get a clear look at all of Colin Kapernick’s tattoos or that receding hairline Drew Brees has, but their height and build are represented accurately enough, and the names and numbers on the backs of their jerseys are clear enough to make no mistake about who it is.

Animation of these models are done quite smoothly. From the throwing motion of a QB to a kicker swinging his leg to nail a field goal, the game looks and feels exactly as you’d expect it to. The environment you’re surrounded by  — a stadium that’s supposed be full of tens of thousands of people — doesn’t quite give you that gladiator feel of an actual NFL stadium, but a modestly animated crowd with the sound effects to match definitely go toward providing a “football feel.”

We played this game on an HTC One M8 running a Snapdragon 801 processor, which we imagined would be more than enough to get the job done. We imagine the game should run well on a vast range of “contemporary” hardware, though don’t be surprised if it suffers a bit on hardware more than 2 years old — this is one demanding game. Long story short, you won’t be complaining about how it looks when you sit down to knock out a couple of quick games. Can the same be said about how it plays?

Just as most folks will argue that beauty is only skin deep, a game can only be good as its gameplay. Doesn’t matter how well a game looks if you don’t enjoy playing it, right? For the case of Madden NFL Mobile, we’d say they did just fine. EA did a fine job in finding a balance between simplicity and freedom.

Movement of players is handled by an on-screen analog stick, allowing you to move the players in pretty much any direction you please. On the other side of the display is a context-sensitive Action button that will change depending on the situation.

Pre-play, you simply press that button to snap the ball. When you are controlling the ball carrier during the play it becomes your best friend — spins, jukes and hurdles are all performed by pressing the button. Your player smartly chooses the right action depending on the situation so you only have to worry about hitting the button at the right moment. On defense, you use it to try and get a big tackle and force a fumble. 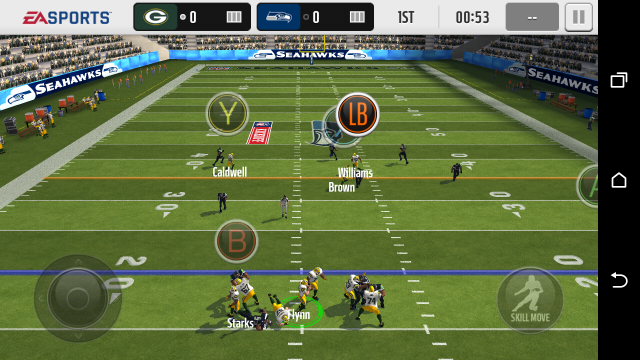 So that’s the ball carrier — what about cornerbacks and quarterbacks? For the former, you can try to intercept an incoming pass by switching to the player closest to the ball (a simple double finger tap) and swipe up on the display when prompted. In order for the latter to throw a pass, you hold the icon if the receiver you want for a bullet and tap it for a lob/floater. Kickers also have their own mechanic: swipe up on a kick meter cone. The velocity of your swipe determines kick power, while the direction of your swipe will determine accuracy.

All of that comes together to create a gameplay experience that feels full, smooth and free as opposed to over-complicated or dumbed down. It makes you feel like every decision is yours and yours along to make without the annoying interference of hand-holding and autonomy. You won’t be getting the deepest of football gameplay out of a mobile title, but it sure feels a lot better than anything we’ve played to date.

Madden NFL Mobile isn’t exactly heavy on a variety of modes and features this year. You’ll be doing a vast majority of your bidding in EA’s Ultimate Team, a card-based collection mode where you play with the player cards you earn. Player cards can be earned from Pro Packs which can be bought with gold (earned by playing and completing games and events) or purchased using in-game currency that you buy with real-life currency. 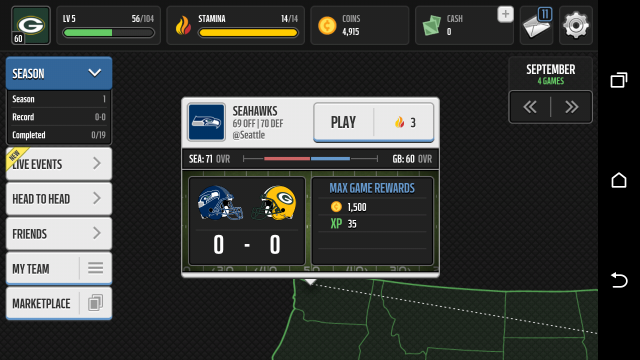 Unfortunately this means you won’t be able to play with the stars of your favorite team immediately — that is, of course, unless you are lucky enough to pull their card from a pack or have enough gold to buy them on the auction house. You will at least be able to play with your favorite team’s uniform, though, so there’s that. It’s a shame EA didn’t include actual NFL teams this go-round, but Ultimate Team has been a cash cow for them in the past few years so we can’t say we’re too surprised.

Thankfully there’s no shortage of what you can do with whatever team you happen to put together. You can go through a more traditional 16 game season where you play your team’s real-life schedule in hopes to reach the playoffs and, ultimately, the Super Bowl. You can go head-to-head against rivalries and friends online. You even have a few training mini games to sink your teeth into for the purpose of earning more gold and XP. Daily and weekly challenges help keep things fresh by giving you the chance to win promotional and collectible cards that can’t be had otherwise.

Unfortunately, all of this is marred by one very annoying factor — stamina. EA has succumbed to the pressures of the free to play world and implemented a system where you can’t move forward unless you wait for your stamina meter to refill or replenish it yourself. You earn one stamina point every 10 minutes, and stamina can also be refilled when you reach new levels, but should you be too impatient to wait or can’t bring yourself up to the next level in a decent amount of time they’ll ask you to pay $1 to continue. 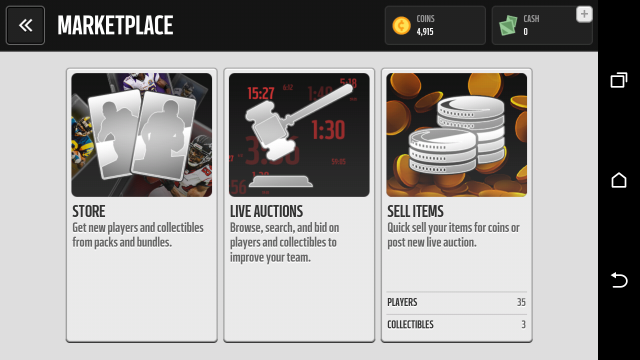 It shouldn’t be surprising considering premium microtransactions have always been the backbone of Ultimate Team, however we wish EA would have kept the shameless cash grabs isolated to the need to buy packs instead of using every little crooked trick they can to push you to spend unnecessary money. I am fortunate enough to be a very patient individual so time constraints don’t usually send me off the deep end — I’ll simply find something else to do or switch to another game. That said, we understand if it’s a turnoff that ultimately keeps you from enjoying the game.

EA has put together a pretty fun game for those who absolutely can’t stand to be without football while they’re away from home. It feels like they have a good grasp on what makes mobile gaming fun. Unfortunately, they don’t have that same level of understanding when it comes to what makes a game frustrating (either that, or they do know and simply don’t care).

Whether the annoyances of microtransactions and modern-day mobile gaming annoy you, we at least appreciate that there’s a pretty good game beneath the green veil of dollar bills EA decided to decorate it with. The download is free in the Google Play Store so don’t hesitate to decide whether it’s worth the time (and potential headache and whatever money you might be inclined to spend) for yourself.