New App: Ignore No More makes it hard for kids to ignore their parents’ phone calls

Folks who aren’t old enough to live on their own and make their own decisions might not appreciate this app, but parents who are sick of their kids ignoring their phone calls are probably rejoicing right now. A new app called Ignore No More has made its way into the Google Play Store, and it allows parents to install a fool proof way to make sure their kids call them back.

So how does it work? The parent installs the app on not only their phone, but any children of theirs who also own smartphones. Should the child be a little rebellious and decide to ignore their parents’ calls, the parent can remotely lock the device with a password that only they know. The only way for the child to get the password is to call the parent and ask for it. Sounds cruel, right? Well, it’s a heck of a lot better than not knowing what your kids are up to or where they are.

The parents can determine a list of adults — likely themselves and other close relatives — that the children can call in case of the phone being locked down. They’ll also have the ability to call 911 and other emergency services, natch, so there’s no concern regarding safety. 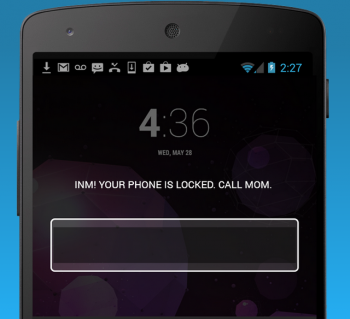 Upon asking myself “well what’s stopping the child from simply uninstalling the app,” I took a look at the company’s website, and they claim that the app is virtually impossible to uninstall or disable for a child. Don’t believe me? Here is the quote in its full glory:

Q: Can my child unregister/uninstall the app from their phone?

A: No, the parent username/email and password are required to unregister or uninstall the Ignore No More app from their phone. So be very careful to protect your account information. If your child has great detective skills and discovers this information, change the password for the parent account immediately!

That’s not entirely true. It’s true that the app does make it rather difficult to uninstall (Christopher Chavez almost ripped his awesome hair out trying to scrub his phone of the app), but it can be worked around. If the child knows to go to the Device Administrators page under Security and uncheck Ignore No More, they will be able to uninstall the app.

What happens the moment they try to disable the app in Device Administrators? It automatically locks itself and sends an email to the parent, though if the parent wasn’t smart enough to change the password since the last time they locked the phone then the child can simply use the same password and continue with the process of disabling the app via Device Administrators. This then gives them the ability to uninstall the app like normal.

This is the reason Ignore No More urges you not to grant your children the password unless you have the phone in your physical possession. Unless the parent also installs a third-party app locker that blocks access to settings and the Google Play Store, that app is just as easy to uninstall as any other.

Regardless, if you are cool with setting up another third-party access that blocks the settings app, Ignore No More can be a very surefire way to ensure your children call you back when you need them. Just don’t try to force them to keep the app once they turn 18 or begin paying for their own smartphones.

PS: The app is meant for the parent-children dynamic, but what’s stopping you from installing this on your significant others’ smartphone while they’re asleep? Just sayin’!