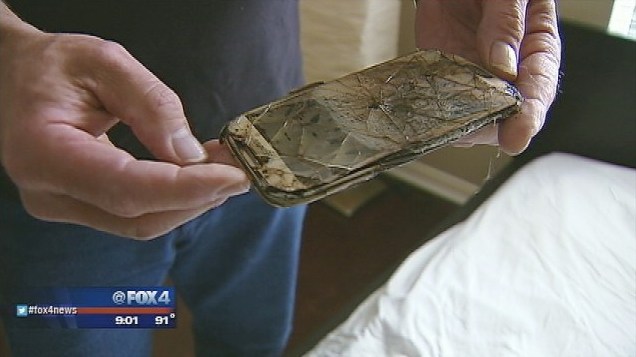 Samsung is making local headlines again, not because of record breaking sales or some fancy new hardware feature. It seems another one of Samsung’s Galaxy smartphones spontaneously combusted, leaving behind a puddle of ash and soot that nobody would guess was ever a smartphone. A Denton County news station tells the story of exactly what went wrong, pointing to — what else — but a faulty 3rd party accessory as the likely culprit.

While charging her Samsung Galaxy S4, a 13 year old Texas teen woke to the smell of smoke after her phone began to catch fire while charging under her pillow — a popular place for youngsters to stash away their cellphone after late night texting sessions and one of the worst places to store a smartphone while electricity is pumping through its circuitry. Where that alone isn’t likely to cause just any household smartphone to explode (although it could cause a device to reach dangerously high temperatures), the combination of heat and a 3rd party battery in the phone caused the nearly all-plastic phone to light on fire.

As Samsung, or any other manufacturer will tell you, cheap 3rd party accessories like chargers or batteries are never guaranteed to work properly with a device and in some cases, can malfunction. We’ve seen countless headlines of exploding phones, some even resulting in death, simply because consumers were looking for a deal or are ignorant to the safety concerns.

While the teen’s father is subtly placing the blame on Samsung who he feels — despite warning users in the user manual about restricting airflow on charging devices — should put bigger warnings labels on devices if they have the potential to catch fire, likening it to warnings found on cigarettes.

Of course, Samsung assures us their products are safe, but admits greater education on the subject is probably needed to avoid further instances like this in the future. Still, despite the hardware failure not appearing to be any fault of their own, Good-Guy Samsung will be replacing both the teen’s smartphone and bedding (pillow, mattress and all) while they investigate the matter.

All that being said, isn’t it about we, as a people, can finally move past this? How many countless smartphones have to die before we learn cheap 3rd party accessories are the last thing we need to be sticking inside our $700 smartphones? Of course, for those times when it does appear to be actual hardware failure, HTC will be more than happy to help steal another customers for Team HTC.