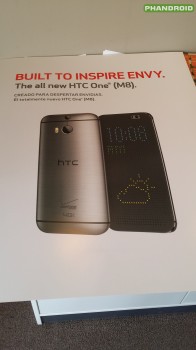 It looks like Verizon is getting ready for a big marketing push for the all new HTC One. An anonymous tipster sent evidence of such with a photo of a storefront to Phandroid.com.

Though the poster doesn’t reveal much — we see the Verizon HTC One (logo and all) with that weird dotted smart case on the front — we do know Verizon is looking to identify it by its codename to differentiate from last year’s version. Its early arrival to retail also suggests Verizon will announce plans to carry the device shortly after HTC’s announcement, though we aren’t too surprised about that.

It’s something that definitely doesn’t fit Verizon’s marketing MO, but this might be a necessary evil for Big Red. They’re expected to continue selling the original HTC One after the new version drops, likely at discounted rates to try and get more people locked into new contacts and commitments.

This definitely wouldn’t be the first time we’ve seen evidence of Verizon’s version out and about. A unit was sold on eBay last month for about $500, though we didn’t get an actual look at the device itself.

The packaging did reveal its specifications, which we now know to include a 5-inch 1080p display, a Snapdragon 801 processor, 2GB of RAM, 32GB of internal storage, and a Duos Ultrapixel camera on the rear that will let you focus shots after you’ve actually taken them.

We don’t know much else about Verizon’s version of the HTC One, but at this point we already have a pretty good idea of what to expect. The mystery won’t drag on for long, though, because HTC’s planning on delivering all the information we’re yearning for next Tuesday.