Talk about the new Nokia X+ devices over at AndroidForums.com!

We’d been so enamored with all of the Nokia X rumors leading up to Mobile World Congress 2014 that we didn’t consider Nokia could have more than one Android device in the works. The company actually has three, as they have officially announced the Nokia X, Nokia X+ and Nokia XL. So are these poised to be rockstar-level superphones or an entry-level line without much exciting to offer? Let’s hop into the bare details for each one.

This is the same device we’ve been hearing about for weeks, which is an entry-level handset built to last. It looks quite nice for where it’ll be positioned, though it isn’t quite as impressive under the hood.

In the area of specs, we’re looking at a 4-inch 800 x 480 IPS display, 512MB of RAM and a 3 megapixel camera, for starters. It’ll also offer Qualcomm’s Snapdragon S4 1GHz dual-core processor, though we’re not sure which exact model it’s sporting just yet. 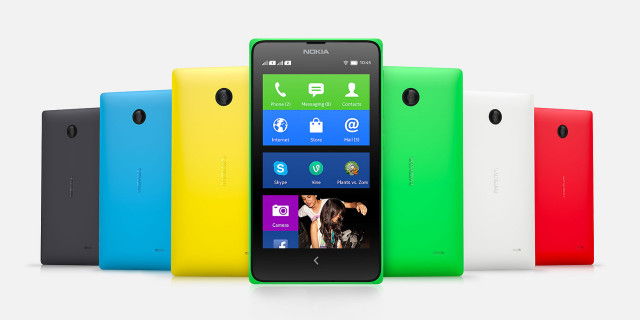 Of course, Nokia storms onto the Android scene with their bright and playful suite of designs. The Nokia X will launch in Yellow, Black, White, Red, Blue and Green.

The Nokia X+ is pretty much the same device as the Nokia X, though RAM gets bumped up to 768MB and Nokia’s sticking a 4GB MicroSD card inside. It’s literally the same phone otherwise, with it launching in the same exact color options as the Nokia X and being exact same size.

This is where things significantly change, as the Nokia XL will sport a larger 5-inch display. Unfortunately it retains the same 800 x 480 as the other two guys. It also gets a bump in the camera department with a 5 megapixel sensor as opposed to the 3 megapixel shooters on the rear of its smaller sisters. This one also adds a 2 megapixel front-facing camera for those all-important selfies and video calls. 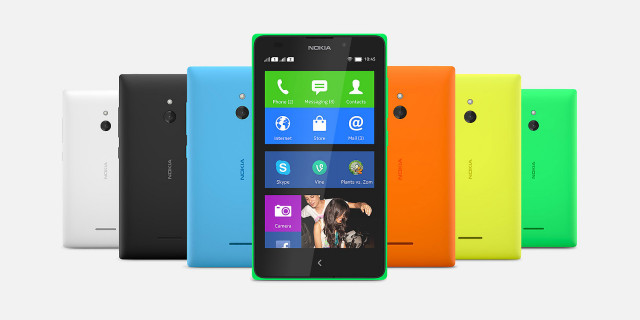 The XL also has just 768MB of RAM and comes equipped with a 4GB microSD card, though, and should be running the same 1GHz dual-core Snapdragon S4 chipset found in all the aforementioned devices.

The Nokia XL will also come in a colorful range of colors, though they are a bit different from the smaller X devices. The tones are a bit more muted than the others, and the red option is swapped out for orange.

Android on the Nokia X family

Of course, all these devices run Android, though not quite like we’ve seen before. Nokia’s unique home-screen brings a tile-based interface for accessing your favorite apps, contacts and most important information without having to dig too deeply into a settings menu or two. Nokia has also customized the notifications experience to make it more like their “Fastlane” screen from Asha devices.

A big focus will be on Nokia’s own services, with the Finnish company boasting Here Maps for turn-buy-turn navigation and directions, Nokia MixRadio for free music streaming, and Microsoft’s Skype with a free month’s worth of international calls.

Other apps being pre-installed are Plants vs Zombies 2, Viber, BBM and more. Want more than that? You’ll have to settle for what’s in Nokia’s app store, load up another third-party app store or sideload your own APKS — there’s no Google Play Store to be found here, folks. 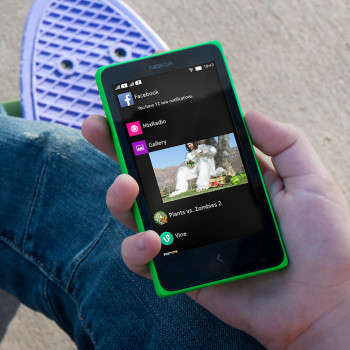 In fact, Google services as a whole seem to be completely nonexistent on this trio of devices. It’s something we expected ahead of the official announcement, but it’s very real and could be a very big deal for those looking into purchasing one of these.

So when? Where? And how much? Thankfully Nokia wasn’t shy on answering most of that. You wouldn’t be wrong in assuming the devices above won’t cost an arm and a leg, with Nokia placing price tags of €89, €99 and €109 for the Nokia X, Nokia X+, and Nokia XL, respectively.

Those prices make it a very appealing option for those in developing markets who might not have hundreds to spend on more powerful hardware.

As for where and when to get it, Nokia says the X is available immediately in Asia Pacific, Europe, india, Latin America, the Middle-East and Africa, while the XL and X+ should arrive at some point in Q2. We’re on the ground in Barcelona at Mobile World Congress looking to get our paws on these things, so stay tuned for our hands-on look right from the show!