Motorola patent automatically detects, records, and shares obstacles with other drivers on the road

Motorola Mobility might have a lot of patents, but not many of them trek far outside areas directly related to mobile. The Google-owned company’s latest patent — US 13/556,081 — takes us inside the vehicle for a system that could help out a whole lot of people driving on the often-dangerous roads of today. 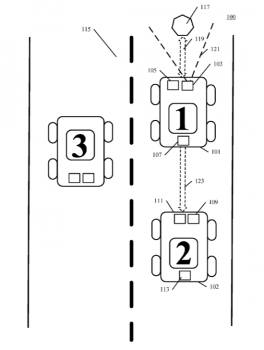 Filed just two months after Google’s acquisition of Motorola officially closed, the patent describes a system of identifying unknown obstacles on the road, automatically recording and photographing them, and relaying this multimedia information to trailing vehicles to warn of the encounter. Here’s the technical description from the patent itself:

An inter-vehicle alert system controls the camera to initiate capturing video data which includes the video data. A method of operation modulates a radar signal to include at least a portion of the video data captured in response to detecting an obstruction, and transmits the radar signal to a second vehicle via an antenna array oriented at the moving vehicle’s rear.

So why would Motorola Mobility — a company typically focused on smartphones and tablets — want to employ such a system? A number of different plausible possibilities exist. For starters, it could make way for a new feature in upcoming phones or updates to existing phones that would send automatic, enhanced traffic reports to the vast community of Google-owned Waze (which is now integrated in Google Maps).

If you don’t know, Waze is a crowd-sourced mapping application and community where users help each other find the best routes by reporting traffic incidents, hazards, and more. A system like the one this patent describes would be quite helpful to that crowd considering it’d allow them to keep their hands on the wheel and eyes on the road while still contributing real-time updates to the community.

The second component to this system — the part about transmitting that information to an antenna array toward its rear — leaves many other possibilities open. I’m immediately reminded of military convoys who are constantly communicating with other units in their pack about road conditions. 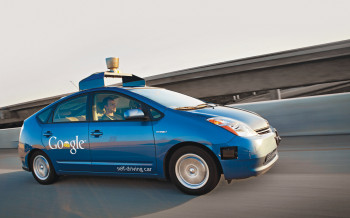 This system could also be helpful in testing Google’s self-driving cars, which use a top-mounted range finder to create 3D mappings of the vehicle’s surroundings in order to identify where it can and should drive.

In fact, we’d place a bet on Google already using this technology in some form or fashion for that very reason, and their control over Motorola means they’re free to do whatever they want with it.

Any number of possibilities exist, so only time will tell what, exactly, Motorola could be looking to do with it going forward (that’s if they decide to do anything at all). Let us know what your guesses would be by dropping a comment below!