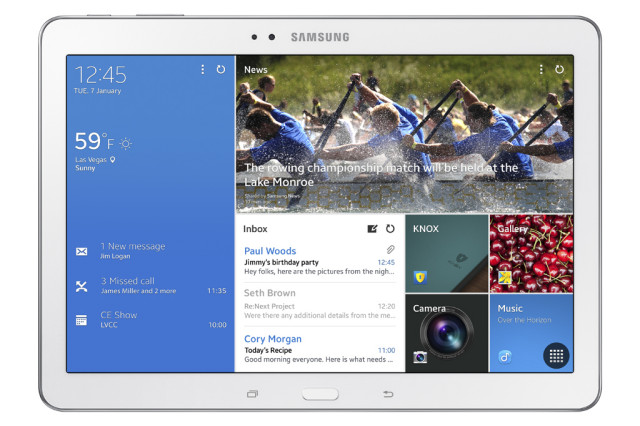 After striking a 10-year deal to share each other’s patents, who knew Google and Samsung were getting so chummy? Their relationship has improved so much that Google doesn’t even feel weird about reaching out to Samsung about their extensive (and gratuitous) use of Android customizations in their smartphones and tablets. You know, because friends are more open about what bothers them.

These closed-door meetings come in the wake of CES, after Samsung unveiled the Samsung Galaxy TabPro with the OEM’s all new Magazine UX, the latest version of TouchWiz for tablets. We got some hands-on time with the tablets, and while we found the UI somewhat useful, we did feel like it drastically changed the Android experience. So much, you had to learn how to use Android all over again.

So, exactly what are the details Google and Samsung are discussing? Well, that part is still unclear. Some are suggesting that Google could be asking Samsung to tone down their UI, dumping the new “Magazine UX” entirely in order to get Samsung devices more inline with the normal version of Android. Others think Google might be unhappy with their own services and apps taking a backseat to Samsung’s in their devices, and want Samsung to settle down with all their “me too” apps. At this point, it’s anyone’s guess. Of course, neither Samsung nor Google would comment on their close-door discussions.

Samsung did, however, release a more generic statement saying that the manufacturer would “continue to identify and provide differentiated and innovative service and content offerings on our mobile devices.” Does this mean we could see the Samsung Galaxy S5 adopt a more Motorola stance of offering a near stock Android with manufacture specific apps? I wouldn’t bet on it, Samsung really likes their Wiz. But hey, at least Google and Samsung are talking.