Remember the Notion Ink Adam? Me neither. OK, OK, it wasn’t quite that bad for its time, although we could have done without the horrible shipping issues, shoddy build quality and DOA software. 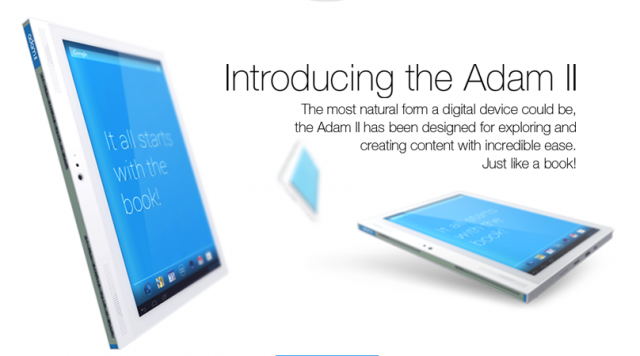 The Notion Ink Adam was actually a pretty good Android tablet in its heyday all things considered, but it never quite took off like Notion Ink had hoped. It didn’t help that Google eventually crafted a tablet OS and made it easy for the biggest players in the Android tablet game to come out with offerings that ultimately overshadowed it.

But never fear — the Notion Ink name isn’t dead. The company has made quite the silent comeback with what is known as the Adam II. Seen above, the tablet isn’t as mindblowingly good as the original was back in the early years. That aside, it doesn’t read out like a terrible tablet on paper.

So what’s making its gears twist and turn? Here’s the quick tale of the tape:

I warned you. There are many smartphones and tablets you can buy that are much more powerful than what Notion Ink has put together here, though we’re willing to bet they have hit on a price point that a lot of wallets will agree with (more on that later).

Adam II features Android 4.2.2 Jelly Bean with what seems to be a relatively clean slate. They likely have their own crop of applications and custom bits scattered throughout, but it doesn’t seem too bad at first glance.

Adam II also features a unique feature that will serve up notifications and information on the spine of the device using low-powered text displays (not unlike that which you’d find on a calculator).

Ready for the price? You’ll be throwing down 219 Euros including VAT (about $300) for the WiFi version, and 249 (about $340 including VAT for the one with 3G radios. Considering you can get a Nexus 7 starting at $230 and an LG G Pad starting at $350 from the Google Play Store, we’d say this device will have its work cut out for it if it wants to attract major attention. Head right here to order one if you’re interested.