In case you’ve forgotten, Motorola held a live Google+ event to announce a new smartphone they’re calling the Moto G. This device has long been rumored as a lesser version of the Moto X, which would make it an affordable option for budget-conscious folks (specifically those living in developing countries). 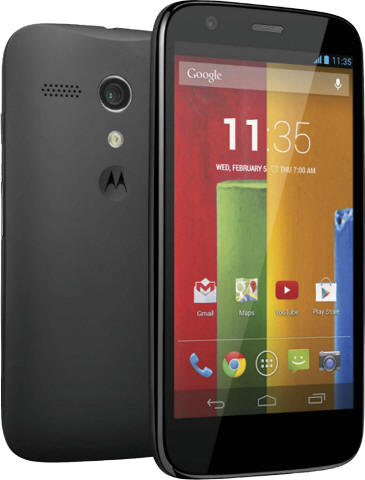 They made that announcement official, and the device is everything we thought it’d be. Motorola wants to give everyone a “today” experience for a third of the price of your typical high-end smartphone — around $200 unlocked, according to their examples. So what does this thing pack under the hood?

The affordable Moto G isn’t dressed to impress, but this spec sheet does impress us when you consider it’s coming at us for less than $200. Here’s what you’re getting:

No, it doesn’t have 2GB of RAM. It doesn’t have a Snapdragon 800. It doesn’t even have an 8 megapixel camera. But folks won’t be thinking about those “shortcomings” when they dig into their wallet for the few bills it’ll cost. (Not to mention Android 4.4 KitKat is designed to work well on smartphones with specs that are even more limited than the Moto G’s.)

Motorola is shipping the device with Android 4.3, which they say is the latest version of the OS that devices in this class are shipped (meaning the cheapo bunch). Beyond that, they’re also guaranteeing a future upgrade Android 4.4 (due by January 2014).

The Chicago company says their software strategy is simple — work with Google’s services, don’t replace them. Don’t bog down the user interface with tons of customization and custom apps. Focus on the fundamentals with extreme attention to detail. We saw all of that in the Moto X and their latest DROID phones, and that hasn’t changed with the Moto G.

In fact, the Moto G might be even “cleaner” than the aforementioned phones — there are no Touchless Controls or Active Notifications (though those features are just as welcome as any other). Motorola does offer a custom camera app, Motorola Migrate, and Motorola Assist to help make life easier, but that’s it — the rest is all Google and all Android.

Motorola also mentioned the Moto Shells, a set of colorful interchangeable backplates that also double as cases. They have exposed-display designs for those who just want to protect the sides and the back, and a flip design that also covers the display (opening the cover will automatically wake the phone up).

These join the colorful headphones and other accessories that can be bought from Motorola’s online storefront, of course, so you can express yourself however you see fit without having to cash in on your 401K.

To give you an idea of how this thing will be priced around the world, the Moto G has been priced at $179.99 for the 8GB version, and $199.99 for 16GB in the US, with both options being available straight through Motorola with a SIM card. And no, folks, that’s not after signing a new two-year contract — that’s the unlocked, unadulterated price.

Carrier pricing might be different, of course, but we wouldn’t expect two-year contract prices to be in the hundreds range. In fact, this might be the perfect $0 – $50 phone carriers love pushing. We’ll have to wait for their individual announcements, though we’ll worry about which carriers will be looking to offer this device before worrying about price.

The device is available today in Latin America, parts of Europe, Canada, and parts of Asia. Launches in the US, India, Middle East, and more of Asia, will go down by the end of January 2014. Motorola says the device will be in more than 40 different countries with more than 60 partners, meaning it shouldn’t be hard to find one of these no matter where you lay your head.