The LG G2 has just been unveiled and it’s definitely looking like a promising smartphone (check out our hands-on). The device has all the powerful specs you can expect from a high-end smartphone, but it’s debatable whether or not it can beat the competition.

The specs are not everything nowadays. A good smartphone has to stand out from the crowd. It has to be different, and LG accomplishes this by offering a form factor never seen before. The G2’s power and volume buttons are placed on the back, right below the camera.

Other highlights include a great screen, powerful camera, studio-quality sound and the UI. But just how much can these features do for the LG G2 in today’s fiercely competitive market? Let’s see how other devices stand against it.

On paper, the LG G2 leaves the Moto X in the dust. There is much more to the Moto X than specs, though. It has good hardware, but it is the mixture of software and hardware that make the Moto X an awesome smartphone.

Motorola and Google have worked hard to make the Moto X succeed. It can be beat by none in terms of customization, offering many colors that you can choose from. The device’s “always listening” features and 20-hour battery life are also very impressive. These features will make for a great show at your local retail stores.

I believe the Moto X’s innovation will beat the G2’s back buttons and UX features. Even if the Moto X does happen to offer a smaller, lower-resolution display and older processor for the same price. Plus, the back buttons may be a feature, but many will just find it weird. We are used to having buttons on the side.

The LG G2 will never beat the Samsung Galaxy S4 just because Sammy happens to be the most powerful Android manufacturer. It’s popularity and success go a long way, but which phone is really better?

We would have to test the LG G2 to be able to really tell, but the G2’s raw specs do beat Samsung by a bit. The LG G2’s processor is more powerful and clocked at higher speeds, and those who love realistic colors will be impressed by LG’s 5.3-inch, full HD, IPS display.

I happen to prefer AMOLED’s deep blacks and saturated colors, but LG is known for its great IPS “true-to-life” displays. Aside from that, other specs are nearly identical and it will probably be a matter of preference. Do you like Samsung’s abundant UI features, or will you go for LG’s UX innovations? Do you even care for the back buttons?

Of course, you can always check out our Samsung Galaxy S4 review if you want to learn more about the device.

The HTC One falls very close to the Samsung Galaxy S4 (read our review of the HTC One), which means the LG G2 also beats it in terms of specs. The HTC One has a smaller 4.7-inch display, but it is a Super LCD 3 screen (very real colors, as well).

The One’s processor is also the same as the Galaxy S4 (except clocked a bit lower), making the LG G2 the phone with the best processor in the list. HTC has also given its flagship device a very good camera and astounding build quality. In fact, the HTC One arguably beats all these devices in terms of build quality. Not to mention, those BoomSound speakers are probably the closest competitor to the G2’s studio quality sound.

The HTC One has its reputation as well, so we are not sure LG can take on it. But if you want that larger display, back buttons and newer processor you will probably go for the G2. 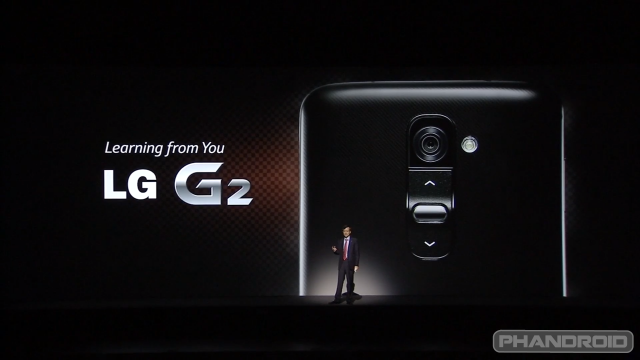 It’s a matter of preference, but it’s hard to compete with the big guys. It will probably beat none of these in sales. The general consumer tends to go with the popular choices, from manufacturers like Samsung, HTC and Motorola. This does not mean the G2 wouldn’t be the best bet for many of you, though.

You may enjoy the G2’s bigger screen and small bezel, or the “comfortable” placement of the buttons. Maybe you want to enjoy the better sound quality or the IPS display’s natural colors. Those intuitive UX features are not bad either.

In general, though, LG will have a hard time competing. The few innovations it brought are not jaw-dropping, though they are cool. I loved the LG Optimus G, but times have changed and we are looking for different features now. I would personally still go for one of the other high-end smartphones. Would you?