An extremely popular messaging app, Path, has recently undergone a complete overhaul, transitioning from a kind of social network, to more of a private messaging platform similar to Facebook Messenger and Whatsapp. The Path app for Android was updated today in the Play Store, bringing about the usual “performance improvements” and “bugfixes.” Let’s hope they managed to squash that bug where Path would send spammy SMS messages to your entire contact list at all hours of the night — yeah, that one.

Word began spreading a few days ago after Path seemingly wigged out on a few users, sending mass SMS messages to everyone in their phone book — ex girlfriends, tire shops, grandmas, etc. — notifying them that the sender had “photos” for them waiting on Path. Not the kind of thing you would want sent to your buddy’s wife on a Friday night. 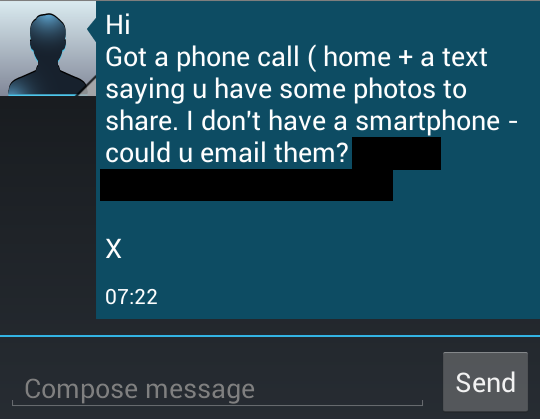 How could something like this even happen? Many times an app will ask if you want to invite others to use the same app, so that they could join in on the fun. Path does the same thing (as illustrated below), letting you select users in your phone book to contact, and how you want to contact them (via email or SMS). You’ll notice there is no option to select your entire phonebook, instead letting you pick them out one-by-one. However, there is the option to invite all your Facebook friends in one fell swoop.

Apparently, some wires got crossed over at Path HQ, causing Path to message everyone in a user’s phonebook– not just those the user selected at sign up. Probably the worst part is the onslaught of spam continued even after the app was uninstalled. Very uncool. Path is pretty upfront about the permissions their app requires, one of which is full access to “read your contacts and call log,” and where some would argue anyone installing an app asking for those permissions had it coming — no. This is a permission many apps ask for, yes, even Whatsapp. 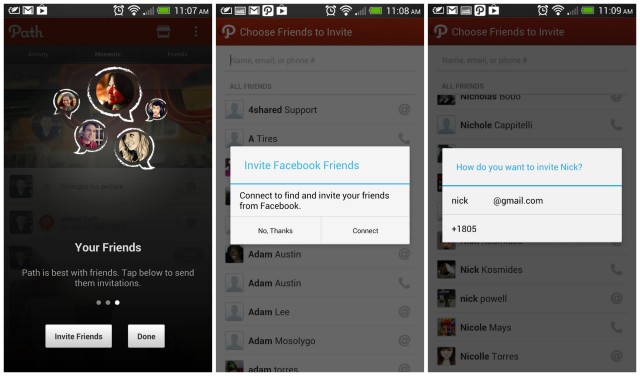 This actually isn’t the first time Path has landed themselves in hot water. Back in February, they settled with the FTC for $800,000 after it was discovered they had been collecting user’s contact information without consent. There’s no question their app is beautiful and where I, myself will continue using it, Path has already left a bad taste in mouth of many prospective downloaders.

[via Branded3 | Path on Google Play]