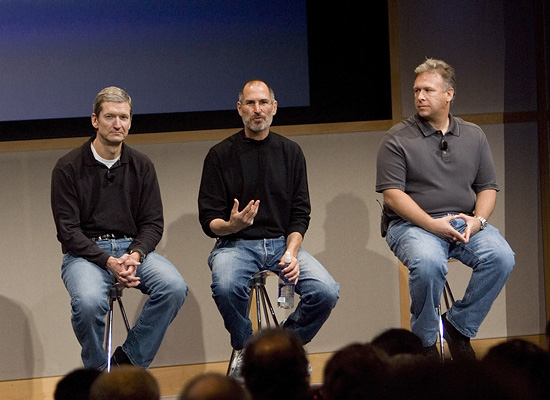 If you thought that only the young, wide eye’d teen with J-Biebs plastered on their iPhone were the only toes Instagram stepped on after going “full on Android” a few weeks ago, you’d be wrong. Apparently, one of Apple’s top execs wasn’t too excited about the move either. Apple’s senior vice president of marketing Phil Schiller disappeared from the social networking service after only praising it a few months earlier on his Twitter account, plugging his own Instagram profile in the process.

So, what happened? Well, according to 9to5Mac, one of their readers reached out to Schiller on the topic via Twitter to which Phil responded candidly with, “It ‘jumped the shark’ when it went Android.” For those of you (like me) that may not have been on the earth long enough to know exactly why someone would jump sharks, it’s an expression that essentially means something that is on a decline, and is beyond recovery. Really Phil? Just because of Android? Ouch.

When asked to clarify via email, Schiller backpedaled saying he still found Instagram to be a “great app and community,” but just like those punk kids on Twitter who liked the exclusivity of the service, found that “the signal to noise ratio is different.”

While the many iOS and even Android users shun the photo sharing service, I continue to embrace it, finding it a great way to share photos with my friends… and stalk unsuspecting girls. What do you guys think of Mr. Schiller’s statement? Do you agree? Keep in mind this is before Facebook bought Instagram for $1 billion. Do you find this kind of attitude surprising coming from a top level Apple exec?

Save big on Amazfit wearables today only